There is consensus among historians on the idea of ​​the 'Italian Renaissance' as a period of cultural history that extends from 1340 to 1550. It was a time when the Middle Ages became modern. The period is characterized by humanism and a flourishing of the arts.

Humanism refers to the intensive study of classical antiquity. This was done by studia humanitatis research: grammar, rhetoric, history, poetry, and moral philosophy in classical Latin and Greek texts. It was not a philosophical system but an educational program that excluded the subjects taught in the universities: logic, philosophy, metaphysics, astronomy, medicine, law and theology.

It was natural for the inhabitants of the Italian peninsula to turn their gaze to the ruins of the Roman civilization that they had in their environment. Furthermore, the study of Roman law at the universities of Padua and Bologna led to a natural interest in the society that produced it. The secularized Christianity of the time, dominated by secular literati, also made the pagan civilization of the classical world attractive.

Dante was a forerunner of the Renaissance in the Italian peninsula through his Divine Comedy (1320) and his humanistic vision. Through his famous work, written in the Tuscan dialect, Dante established vernacular languages ​​as literary vehicles, dispensing with Latin. Petrarch and Boccaccio would follow this example. Dante's language became the official language in several Italian states and helped develop a national consciousness in the works of Machiavelli. (Ironically, Tuscan has become the standard language in Italy, as Latin was before, and prevails over all other dialects.)

Dante also argued that this life had value and that the individual had the right to opinion and happiness. His belief that there should be a separation between church and state encouraged many admiring humanists to adopt a secularized and civic vision, replacing the religious conception of the Middle Ages.

The humanistic rebirth was promoted by two Florentine writers as early as the trecento (14th century). They are comparable for their common desire to promote the vernacular and the humanistic study of Latin. Petrarch is famous for his poems in the language of dialect and his investigations as a scholar and writer in Latin. He was anti-scholastic, that is to say critical of the traditional university knowledge of the Middle Ages: astrology, logic, law and Aristotelian thought. His research on the classics focused on Cicero, Seneca, Plato (and on the spiritual Augustine of Hippo).

Boccaccio completed his Decameron in 1358, written in the vernacular dialect of Florence, novels about 10 people escaping the plague in the city. Petrarch translated it into Latin. Boccaccio also wrote a biography of Dante and lectured on his poems. On the other hand, he produced a work in Latin entitled the Genealogy of the Gods of the Gentiles on classical culture and mythology.

During the quattrocento (15th century) humanism dominated the intellectual life of the Italic peninsula and promoted , history, art, education, lifestyle and the dialect of Florence. The scholars of Florence turned from moral philosophy to metaphysics. Ficino (1433-99) translated all of Plato's writings, some Neoplatonic texts, and the Greek mystical work Corpus Hermeticum. Pico de la Mirándola followed suit, arguing that humans could determine their own salvation by following the natural impulses of love and beauty in an optimistic view of humanity and its place in the universe.

In addition to the ideas of humanism, the Italian Renaissance was a flowering moment for the arts. This was made possible by the patronage of wealthy Florentines, in particular the Medici family. They had political interests and used their patronage of the arts to legitimize their power in the city. Like other wealthy people, the family commissioned works of art to increase their status and strengthen their political power in Florence. 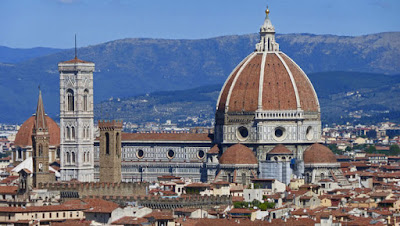 The Medici also had a real interest in painting, sculpture, architecture, and literature. Cosimo di Medici was an expert in architecture and sponsored Bruneschelli, who built the great sacristy in the family church of San Lorenzo and, in 1436, completed the dome of the cathedral that had been left uncovered for several years due to lack of architectural knowledge. Cosimo had the Medici Palace built, the family home, and sponsored the bronze statue of David by Donatello.

Lorenzo di Medici was knowledgeable in architecture, painting and sculpture. He commissioned works from Botticelli, Perugino, Ghirlandaio and welcomed the young Michelangelo into his home. Lorenzo treated artists as creators when society viewed them as mere artisans. They lived in an environment where they had freedom of expression and came to produce excellent works of art.

Due to the ironies of history, the Medicis fell into financial trouble from 1480, partly due to their spending on art, and that this contributed to their expulsion from the city in 1494.

In the Florence of the Renaissance the patrons of painting, sculpture and architecture were the rulers. Their motivations were a mix of aestheticism, civic pride, and propaganda.

The Italy of the time was divided into many city-states that were in competition. This fragmentation, which had been its weakness, contributed in the Renaissance to its cultural supremacy through the same rivalry. The Vatican also played a role, particularly when Pope Nicholas V teamed up with humanism to construct buildings to demonstrate the power of the Holy See.

Girolamo Savonarola was a Dominican friar in Florence. He became a Catholic prophet against the sinful apostasy that he saw in the renewed humanistic interest of art and literature. In 1493 the Pope appointed him Vicar General and Savonarola proclaimed a political revolution, ordered by God, according to him, for religious and moral regeneration. He welcomed the French King Charles VIII when he invaded the city to install that divine order. When the French troops retired, the Republic was proclaimed and his party (the Llorones) was booming. He became a spiritual guide to the city. He wanted to install a religious policy in which Florence would be a Christian commune with God as sovereign and his gospel as law: a theocracy. There was repression against frivolity and vice. Gambling was prohibited and fashionable dressing.

There were many bonfires of Renaissance clothing, jewelry, and even works of art. (Botticelli had to participate by throwing a painting on the fire in the Plaza Mayor.)

A second 'bonfire of the vanities', in 1498, caused a stir in the city. In the new elections the Medici returned to power. The same year Savonarola was tried, hanged, and burnt at the stake.

After the fall of Savonarola and the rise to power of the Medici family, Nicholas Machiavelli was appointed secretary of Foreign Affairs and War for the city, a position he held until 1512 and which led him to carry out diplomatic missions to the King of France, Emperor Maximilian I of Habsburg and Caesar Borgia, among others. His main work, The Prince, dedicated to Lorenzo di Medici, was inspired by Caesar Borgia. In it Machiavelli describes different State models according to their origin (force, perversion, chance) and analyises the most appropriate policies for their survival. From this perspective, the psychological profile that a Prince should have is analyzed and he comments on what human virtues must prevail in his task of government. Machiavelli concludes that the prince must appear to possess certain qualities: be able to fake and dissimulate well, and subordinate all moral values ​​to the National interest, embodied in his person. (This fitted very well with the ideology of his mentors, the Medici.)

Leonardo da Vinci, painter, architect, inventor and student of all things scientific. What remains of his art are the Mona Lisa and The Last Supper.

Several themes united Da Vinci's eclectic interests. He believed that art was closely related to science and nature. He also thought that sight was the most important sense to live fully: (sapere videre) not just seeing but knowing how to see. Da Vinci was the archetype of the Italian Renaissance man.