After Aristotle's death the Greek cities had fallen into disarray and were easily annexed by Macedonia. Life was insecure and problematic. The Roman Empire offered the conditions for a continuing cultural tradition: military, political, and economic stability. Administrators upheld Roman law and protection, and educated, bilingual Romans embraced Greek culture.

In 197 B.C. Rome finished conquering Macedonia, that from Alexander the Great had dominated the Greek polis as colonizer. In the battle of the highlands of Cynoscephalae (Dog's head) the famous Alexandrian phalanx strategy was very exposed in the rugged terrain of the hills and Flaminio's legionaries won. In post-war negotiation King Philip of Macedonia maintained his throne, but ironically the Greek cities that had supported the Romans were turned into Roman colonies. Another historical irony was the love that the Roman leader Flaminius professed for Greek culture (he was bilingual) and yet politically he imposed himself as a colonizer as in 27 B.C. Rome annexed Greece as a province. The exchange between the cultured but colonized Greece and its Roman conqueror intensified. 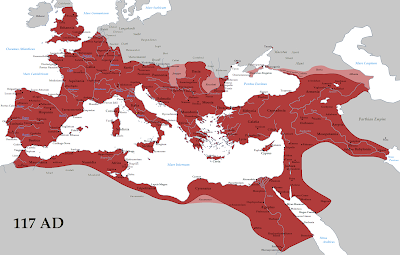 In post-Aristotelian Greece two dogmatic systems had already developed as responses to the disordered environment: stoicism and epicureanism,

The Stoic system had been created by Zeno of Citio (4th century B.C.) who, having lost his fortune in a shipwreck, learned from the Cynics in Athens that material possessions are not important to happiness. Zeno's thought was Socratic philosophy turned into dogma: the basis of human happiness was 'living according to oneself', later 'living according to nature'. Virtue is the only good necessary for a human and consists in the knowledge of what is correct, what must be tolerated, or not, and justice. The world is governed by the divine Logos, the reason that maintains order in the world.

It was the philosophy chosen by the Roman Seneca who educated and advised Nero and committed suicide in AD 65 on his orders.

Cato the Younger (A.D. 95-46), Roman senator and Julius Caesar's ideological enemy, also declared himself a stoic and was critical of political corruption in Rome. His moral integrity contrasted with the political forms of the day. Although rich, Cato only ate and drank what was necessary, as a good stoic. He took his own life pushed by his great rival Julius Caesar.

Zeno of Elea's contemporary Epicurus also built a defensive philosophy for this troubled world. However, it appears as the opposite of stoicism:

- the Stoics proclaimed that the wise man tries to learn from everyone; Epicurus insisted that all his thoughts were original and his own. (However, his physical explanation of the universe is a simplification of Democritus' atomism.)

- Zeno of Citium taught that pleasure and pain have no importance in happiness; Epicurus had pleasure as the basis of a happy life.

- The Stoics were advisers to the kings; the Epicureans retired to their gardens and rejected public life.

- In religion the Stoics believed in divine providence while the followers of Epicurus thought that the gods did not pay attention to humans.

Despite these differences, both philosophies had points in common:

- Epicurus promoted the simple pleasures of life, but not debauchery

- He was not an atheist but believed that the gods were perfect, albeit distant, examples for humans in their imperfection.

The Stoic, Seneca, recognized the true nature of Epicureanism and in its 'Epistulae morales' included quotes from Epicurus in his stoic exhortations.

Lucretius was an Epicurean and one of the first Romans to write on philosophy. He has left a long poem, De rerum natura, which explains the philosophy of Epicurus in Latin for those who could not read Greek. Lucretius believed that even though the gods had created the world, Nature controlled its normal functioning. Death, according to him, was simply the end of consciousness, not the beginning of eternal life. This was an important question in his time because people from Asia and the Mediterranean such as Buddhists, Zoriastrians, Christians, Gnostics and Platonic philosophers were asking questions on the same subject.

Another contemporary of Zeno of Citium, Pirrón de Elis, founded the philosophy of skepticism. He concluded that no one could know for sure, nor could he know if what he perceived with his senses was real and not an illusion. Pirrón is said to have ignored the obstacles and vehicles he encountered on the street and was only saved from dying in an accident by his disciples. (Modern neuroscience has taught us to differentiate between the illusory and the real. For example, if we jump in front of a bus, certainly solid and occupying space, it will cause injuries and possibly death. Neurologist Anil Seth explains that it is the way we perceive the bus which is a controlled hallucination, not the bus itself.)

The importance of Pirrón de Elis lies in the contribution of one of his followers, Sextus Empiricus, in his Pros dogmatikous. His refutation of other authors quotes other people's texts extensively and thus they have been conserved as data for later scholars. (Hume and Kant used these texts from Sextus for their study of ancient philosophy.)

Cicero, Roman consul in A.D. 63, was writing about philosophy at the same time as Lucretius, but he was skeptical. He thought it necessary to question all the ideas heard. He used philosophy to think logically, especially about state governance. It harbored some stoic ideas as well, such as the belief that humans should aspire to goodness.

Various philosophies on the religious meaning of life emerged in the Roman Empire. The Gnostics inhabited the eastern Mediterranean for about 100 years before and after Christ, in such a way that some were Christians and Jews. They used secret knowledge (gnosis) to get closer to God. Gradually the established Christian church declared these beliefs as heresies and persuaded the Gnostic Christians that in order to come to God one had to lead a good life and obey the bishops and priests.

This was the dominant philosophy among the Greco-Romans from the 3rd century to the Arab empire in the 7th century. It offered a comprehensive theory of the universe and the place of the individual in it. It was a great synthesis of the Hellenistic tradition until then (except for the epicureanism that it rejected). It was also an idealistic philosophy that believed in the domination of the mind (nous) over matter. His second principle was monistic and argued that there is a single cause, considered divine, that could explain everything. This principle is a conscious being.

Plotinus (204-270) is considered to be the founder of Neoplatonism. Egyptian, study in Alexandria, and he moved to Rome around 245 where he founded his philosophical school. Neoplatonism was so successful that at the end of the Roman Empire Christians were taught in Alexandria and studied in Athens, Constantinople, Baghdad, and other centers.

When Hypatia was born in 370, Alexandria's intellectual life had ideological problems. The Roman empire was converting to Christianity, and the leaders of this religion tended to view mathematics and science as heresies or works of the devil.

Hypatia studied in Athens and Italy. On returning to Alexandria she taught mathematics and philosophy at the Museion. Her classes became intellectual discussions of science and philosophy. Her most significant work that has come down to us was a commentary on Diophantus, the father of algebra. He probably worked with Theon who revised and improved the Elements of Euclid.

Hypatia subscribed to Neoplatonic philosophy. There was a rivalry between the neo-Platonist schools of Athens (which emphasized magic) and Alexandria (based on mathematics).

As a pagan, scientist, and political influencer, Hypatia was in a dangerous place because of growing Christian power. In 412 Cyril, an intense anti-Platonist, was promoted to the post of Patriarch of Alexandria. Three years later Hypatia was attacked and killed by a crowd in the middle of the street. His death marked the end of Platonism teaching in Alexandria and throughout the Roman Empire. It was replaced by Christianity. Christian intellectuals such as Augustine of Hippo and Thomas Aquinas tried to reconcile the Neoplatonic tradition with Christianity.

Augustine of Hippo was born in 354 in Tagaste (Algeria), a provincial Roman city. His Berber parents were Catholic, but Augustine left the church to follow the Manichean credo.

His meeting with Ambrose, Bishop of Milan, and his cleverly rhetorical sermons convinced Augustine to return to Catholicism. His book Confessions is the account of his conversion. He embraced Neoplatonism.

- What is the relationship between an infinite God and his finite creation? It is not a temporal or spatial relationship, but between Creator and creation.

- The problem of evil. How can a God of goodness have created evil in the world? According to Augustine, evil does not exist in itself, as the Manicheans maintained, but is the deprivation of goodness.

However, Platonism cannot lead to salvation, according to Augustine, because it does not accept the mediation of Christ.

In 388 he returned to Tagasta and founded a monastery where he became famous for his sermons and his fight against the Manicheans. In 391 he was ordained a priest and 5 years later coadjutor to the Bishop of Hippo. Upon entering the bishopric, he fought against the heresies of Donatism and Pelagianism.

In 410 the Visigoths plundered Rome and a rumour spread that it was the fault of Christianity and that the empire should return to its pagan gods. Augustine spent the rest of his life writing The City of God, a defense of Christianity. The book argues that God had destroyed the city of man (Rome) to prepare humanity for the city of God (Heaven).

Augustine died in 430 with the Vandals at the gates of Hippo.

Although we recognize the Greco-Roman culture as a unit, there are differences. In his early 20th century article Mackinder notes the failure of the Latinization of the Greeks by the Romans. He adds that this had subsequent consequences:

- The Teutons were civilized by the Romans; the Slavs by the Greeks.

- The Roman Teutons invaded by sea; the Greek Slavs invaded the steppes.

He concludes that conquest by sea or by land depends on geographical differences, but also on different ideals.