- 'The School of Athens' by Raphael

Pope Julius II commissioned Raffaelo Sanzio to redecorate his living appartments with new frescos between 1508 and 1511.  In the library, La Stanza della Segnatura, one of the paintings was 'The School of Athens'. It was painted over previous artists' works which Julius decided were expendable.

The common theme of the painting and the others in the room is the synthesis of Greek worldly thinking and Christian spiritual thought. It is a Renaissance fusion of the traditional philosophical themes of the horizontal vs. vertical worldviews held since Homer's epics. This work of art was sponsored by the Papacy so the oppositions were portrayed as Greek and Christian but in fact Greek philosophy itself was already split between the metaphysical and the physical from the outset. 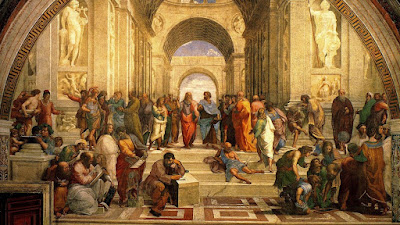 In the fresco the two main figures are Plato on the left and his pupil, Aristotle, on the right. The opposition of their philosophies is displayed by Plato's pointing towards upwards to emphasise his belief that reality lay in a spiritual realm and Aristotle, the biologist, indicating downwards with flat outstreched arm conveying that reality is empirical and experienced directly through our senses.
Plato (428 - 348 BC) holds his book Timaeus, and Aristotle (384 to 322 BC) holds Ethics. In the Timaeus Plato argues that the universe is the creation of a divine craftsman who orders it according to an eternal and unchanging model. It is conceived to be good. This excellence is what human souls must aspire to in order to restore their original state lost through embodiment. The essential nature of humanity is thus spiritual, not physical. and morality is acquired through a top down effort of understanding of what goodness is then applying that idea.
Aristotle's Ethics rejects Plato's idealism. He affirms, on the contrary, that to live a moral life we need to experience goodness in human relationships and work out, through reason, the moral path in each situation. Wisdom is acquired through bottom up practice, not inferring from general rules.
The philosophers grouped on the left of the fresco, Plato's side, are idealists who adhere to a deductive model of thinking which analyses from the general to the particular. Those on Aristotle's side are realists who think inductively, building from particularities to a general view.
The Idealists 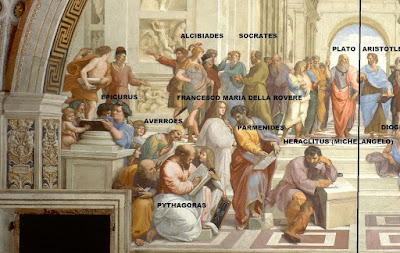 Zenon of Citium (334 - 262 BC) was the founder of Stoicism, a system of personal ethics. His philosophical beliefs are based on striving after the absence of passion. His idealism consists in considering Wisdom to be above the emotions and animal desires. To rise above the physical he taught 'apathy' which would liberate the self from passion and pain. He relied on reason to govern his natural impulses and saw both reason and nature as part of the same unity.
Epicurus (341 - 270 BC) believed in a golden mean, that of tranquility through the absence of bodily pain and fear. This limitation of desires was his path to happiness and it was effected through the application of rationality. It was a case of mind over body in the promotion of a simple life. In this sense Epicurus, though apparently a hedonist, was an idealist.
Alcibiades (450 - 404 BC) sought out Socrates as his mentor. We know of him through a dialogue between himself and his mentor ascribed to Plato: Alcibiades I. Among the discussions is one about which principle rules a human. Socrates bring Alcibiades round to agreeing that it is not the body but the soul, thus convincing him that idealism is the path to follow, not realism.
Parmenides (late 5th, early 6th cent. BC), a presocratic whose only extant work is a poem entitled 'On Nature'. In it a traveller on a mystical journey receives a revelation from a goddess on the nature of reality. The model that is proposed for gaining knowledge is conviction and human reliance on the senses to understand reality is heavily criticised. This is clearly an argument in favour of top down idealism as the chosen way to comprehend the Cosmos.
Heraclitus (540 - 280 BC), a presocratic philosopher, believed that the Cosmos was an orderly universe whose essence was fire. Order arose from a persistent unity despite constant change. The governing principle of the Cosmos was the Logos, an intuitive description of the modern 'laws of nature'. His idealism is patent in his belief in an abstract eternal essence as opposed to concrete fleeting existence. His metaphysics was rooted in his idea of 'Becoming', eternal change.
Socrates (470 - 399 BC) believed in finding knowledge within himself instead of focusing on external realities. The Socratic method consisted of a dialogue, posing questions rather than offering answers. He believed in the division between body and soul and the need to transcend the clouded sensory impulses of the physical in order to get to the essence of reality and attain knowledge. Of course we only know Socrates through the records written by his disciple Plato. There he is portrayed as an idealist thinker by his biographer.
Pythagoras (570 - 495 BC) believed that numbers were the way to understand the Cosmos. His numbers represent not an external reality but ideas because they rule over matter. According to Aristotle Pythagoras believed in the soul and its transmigration. This indicates its immortality and its place above material things. These are the hallmarks of the idealist thinker. His followers, the pythagorans, were a secret sect of believers who established themselves in Crotone, S. Italy.
Averroes (1126 - 1198) applied himself to reconciling aristotelic thought and the Islamic faith. He argued that there are two ways of reaching the same Truth: through philosophy or through religion. He believed in the soul but not in its eternity. Thomism later rejected Averroes' views since he affirmed science and philosophy as paths to Truth rather than the scholastic knowledge through faith alone. His synthesis of aristotelic realism with Islamic faith did not lead him to empiricism and he remained a deductive thinker but did not rule out inductive thinking.
The Realists 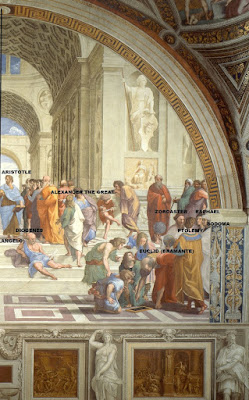 Zoroaster (previous - 500 BC) is on Aristoteles's side of the fresco though the zoroastrian religious cult is clearly idealist and relies on faith doctrines such as monotheism, belief in the soul, paradise and hell and a duel between the forces of good and evil where humans choose their side.
Alexander the Great (356 - 323) can be linked with Aristotle directly since the philosopher was engaged as his private tutor. His interest in science probably stems from that but Aristotle did not accompany him in his conquests so his military skills came from his father.
Ptolemy (100 - 170 AD) was a man of many interests: philosophy, maths, theology, cartography, astronomy. He documented the known world by drawing the first world map. He developed an earth-centred cosmology based on observations. The theory was incorrect but realist in its basis on measurements and observational evidence rather than faith.
Euclid (end 4th beginning of 3rd. cent BC) is placed among the realists since he was able to describe and measure what Plato had envisaged as theoretical solid forms. Euclid's models were so well accepted that they remained as references until replaced by 19th century geometry.
Raphael placed himself among the realists.
Diogenes is painted in the centre as not belonging to either side but critical with all ideologies
It is interesting to note that the theme of opposition extends to the room and frescos themselves. On the opposite wall of the philosophical School of Athens hangs one dealing with theology named Disputation of the Most Holy Sacrament.
Email ThisBlogThis!Share to TwitterShare to FacebookShare to Pinterest