- The Florence Duomo Dome by Brunelleschi 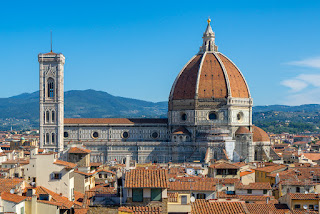 The Italian Renaissance began in the 'quattrocento' with the rise of the arts and humanism. It was less a synthesis and more a new beginning, a new vision based on studia humanitatis, research on traditional subjects based on the classical models of Rome and Greece. In politics it included a gradual wresting of power from the religious authorities to promote a secularising vision of social organisation. Italian culture had opted for a horizontal vision in politics and historical interpretation.

There was a renewed search for identity after the fall of the Roman Empire and the loss of references during the Middle Ages. The new identity was founded on politics, the literary vernacular, and in Christian and Greco-Roman art. The wealthy Florentine merchants and the Popes invested funds in works of art that stimulated painters, sculptors, and architects.

Brunelleschi (1377-1446) was a qualified goldsmith in Florence. Like his fellow goldsmiths, Ghiberti and Donatello, his training included sculpture. In 1401 seven artisans, including Brunelleschi and Ghiberti, entered a competition to sculpt the new bronze doors of the cathedral baptistery. Ghiberti was awarded the work and this disappointment led Brunelleschi to search for a new profession which he found in architecture.

Brunelleschi studied visual proportions and harmonies through a geometric approach to the standard of classical beauty which was the model for the Renaissance. He inaugurated a new building style to replace pointed Gothic art consisting of patterns of regular harmonious shapes in the form of arches, squares and circles which became Renaissance architecture. He also invented cranes to hoist materials for building his most famous structure - the cathedral Dome. He even designed a ship to carry marble from Pisa to Florence, but saw it sink in the river Arno on the first voyage. 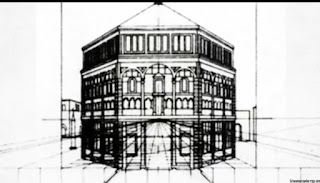 History tells us that Brunelleschi invented one-point linear perspective which allowed him to draw a building in 3D instead of the traditional flat 2D. He conceived the technique when studying and drawing ruins of classical buildings in Rome. It revolutionised the representation of space and human perception of the world through art.

The rich Florentine Republic decided to build a cathedral in 1296. It was designed to be topped by a huge dome 150 feet wide and beginning at a height of 180 feet above the ground. However there probably wasn't enough timber in Tuscany to erect the necessary supporting scaffolding used in conventional dome erection. Added to this the planners did not want to follow the traditional Gothic buttresses and pointed arches already used in Milan. The structure also needed to be built on the octagonal floorplan of the existing walls. Would it collapse inward as it arched upwards? Nobody knew.

The public competition to build the cathedral dome was announced in 1418. It was awarded Brunelleschi and Ghiberti as co-superintendents applying a design created by Brunelleschi. The construction of the Dome began on 7 August 1420. 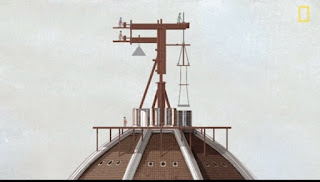 The first problem facing Brunelleschi was lifting the heavy building materials up to the Dome without a central scaffolding. He invented a novel type of hoist which through pulleys, screws and driveshafts turned by oxen on a wooden tiller lifted the material vertically and a 'castello' crane which moved them laterally once hoisted.

The dome structure was designed to be light and stand in 8 segments on top of the octagonal base with inner and outer shells separated by a space. Having studied the dome of the Roman Pamteon the architect used the same herringbone brick network to add extra solidity and reduced the weight.

On top of the dome there is a bronze ball built by Verrocchio in 1472. This was put into position by using machinery invented by the architect. A young Leonardo da Vinci is said to have helped as an apprentice in this operation.

In 1572 Cosimo I de Medici comissioned Vasari to paint frescoes on the inside of the dome showing the Last Judgement. Tgey are divided into themes following the eight sections of the cupola. Some of the themes are taken from Dante's Divina Comedia. Others are depict scenes from the Apocalypse, groups of saints and angels and other religious motifs. 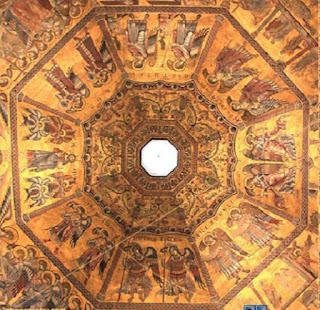