- Commentaries on Aristotle by Averroes 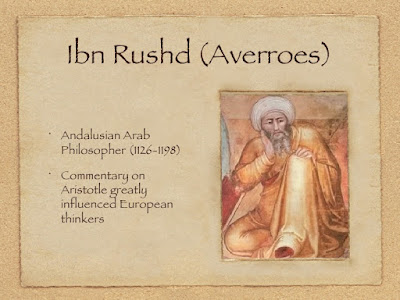 Averroes or Ibn Rushd  (1126 - 1198) was a Cordovan born in 12th century Muslim Hispania. After his death his comments on Aristotle had a great influence on the development of scholasticism in Europe where he was known as 'The Commentator'. In the Islamic world he defended Greek philosophy against theologians of Muslim orthodoxy.

For Averroës, contrary to Avicenna, there was no conflict between religion and philosophy and he argued that they were two ways to get to know the same truth. He dared to argue that reason and philosophy were superior to knowledge by faith. The Islamic authorities of Cordoba condemned him for excessive rationalism and he was exiled to a town outside the city.

"There is no contradiction between reason and the revealed Text.

Since therefore this Revelation is the truth, and calls for the practice of the rational examination which assures the knowledge of the truth, then we Muslims know with certain knowledge that the examination [of beings] by demonstration will not entail no contradiction with the teachings brought by the revealed Text: for the truth cannot be contrary to the truth, but agrees with it and testifies in its favour."

Averroes believed in an eternal universe and a soul. He also adopted the radical idea that 'existence precedes essence', an idea that came from Aristotle and was developed by existentialism in the 20th century.

Averroes classified his Commentaries (initiated in 1169) into three categories now named the short, middle and long.  He states his aim at the beginning of his first short commentary >

"... the purpose of this discourse is to seek, in the perspective of the legal examination, if the study of philosophy and the sciences of logic is allowed by the revealed Law, or else condemned by it, or although still prescribed, either as a recommendation or as an obligation."

The short commentaries are summaries of Aristotelian doctrines composed early in his career.  In this compendium, Averroes abandons the order of the original to give an exposition of the subject of the treatise in his own words and by his own method elucidate the problems under discussion. He also  settles his polemics with his Arabian predecessors in the same field such as Alfarabi and Avicenna. The short commentary is thus a kind of independent work on Aristotle's treatise.

The middle commentaries paraphrase and clarify Aristotle's original text. It contains only the first few words of the text of each paragraph, followed by the paraphrase of the content of Aristotle's thought. It follows closely the order and method of the original.

The long commentaries are line-by-line commentaries and include the complete text of the original works with a detailed analysis of each line. They are very detailed and contain a high degree of original thought.

Averroes brings a new philosophical vision to his time concerning several topics. He argued that they were all consistent with religious teachings and Aristotelian philosophy. However others considered them heretical:

- He affirms that the Koran and philosophy both consider that the world has always existed. God gave shape to creatures but the physical Cosmos is eternal, the same as God.

- He argues that souls survive death, not bodies. They will acquire another body in the afterlife. He adds that we will probably not live in the Koran's promised garden of delights.

- Averroes denied personal intellect. For him it is a shared immaterial item which we can all access when we think.

"These include, for example, the recognition of the existence of God, prophecies, bliss and torments in the Hereafter; for these three fundamental dogmas, the three types of arguments by the effect of which the assent of all men is inevitably produced that the Law commits them to know, the rhetorical, dialectical and demonstrative arguments, also end in establish truthfulness]. He who denies such things as these, when it comes to a fundamental [dogmatic] principle of the revealed Law, is an infidel ..." (Short commentary 37)

Following Aristotle Averroes defines physics as the study of all sensitive beings who are able to move and are subject to change. Physics investigates the limits of all natural beings to include prime matter and a first mover.

Averroes approaches the value of natural philosophy in a different manner from Aristoteles. He recognises that physics which belongs to the theoretical part is philosophy but he also includes the practical dimension - ethics. This is the only way humans can reach real happiness. The ethical virtues are justice, temperance, courage and so on and are those you must cultivate after you have the speculative virtues.  The wise person wants to be morally virtuous because they know that the moral and theoretical virtues are one.

Aristotle reduced all kinds of change to local motion, and then to circular motion, up to the eternal motion of the universe the mover of which was the First Mover.

Averroes, following Aristotle, shows the inconsistencies of supposing a finite mover causing motion for an infinite time. Averroes also says that a body or a corporeal power does not have an infinite action, therefore the mover with an infinite power is not a body.

Aristotle did not make it easy for Averroes who complains how long he took great pains to find the explanation. But once proven that the first mover is not a body, it becomes easier: the First Mover does not need to be affected by the mentioned restrictions of corporeal movers, and it can produce motion for an infinite time. And the First Mover becomes a metaphysical principle like Prime Matter.

Averroes divides the principal sciences into three : physics, mathematics and metaphysics. He argues that these correspond to the three kinds of existence : existence in matter (physics), those treated apart form matter (mathematics) and (mtaphysics) those of two parts : not existing in matter like spirits and Universals like unity, plurality or potentiality. Universals depend on reason to make them universal. Averroes argues that the Platonists are mistaken when they make universals causes in themselves.

Metaphysics builds on physical and mathematical foundations. From physics it gets the idea of an immaterial mover and the way it moves. From mathematical astronomy it gets the number of movers from the heavenly spheres. Metaphysics for Averroes is more important than the other sciences because it leads to a knowledge of ultimate causes which verify the principles of other sciences.

Averroes' intention is to prove from the eternity of motion the existence of eternal immaterial movers and a single principle, which is God, existing as the cause of movement and of the universe. He argues that as humans know of the lower intelligences so God knows of ours but in a superior way. God's knowledge of himself is identical with his knowledge of the Universe. But his knowledge is not our knowledge. This is Averroes' basis for his theodicy. For him God is not responsible for evil, because evil is a concomitant of matter, and God does not know that. Not to know some things is better than to know them, and, he argues, no defect or imperfection, rather the contrary. His doctrine is to make God know the particular and save him from responsibility for evil by saying that good and evil are only in relation to us, to God they do not exist.

"Proof of the existence of the Craftsman (God) by the use of reason.

If the act of philosophizing consists of nothing other than the rational examination of beings, and the fact of reflecting on them as they constitute the proof of the existence of the Craftsman [God], that is, insofar as they are [analogous to] artefacts - because in fact, it is only to the extent that we know their fabric that beings constitute a proof of the existence of the Craftsman; and the knowledge of the Craftsman is all the more perfect as the knowledge of beings in their making is perfect; and if Revelation does recommend men to reflect on beings and encourages them to do so, then it is evident that the activity designated by this name [of philosophy] is, by virtue of the revealed Law, either obligatory or recommended." (Short commentary 2)

Averroes is one of the sources of medieval philosophy and enables understanding of scholastics like Albertus Magnus, Thomas Aquinas and William Occam.