- The Decameron by Boccaccio 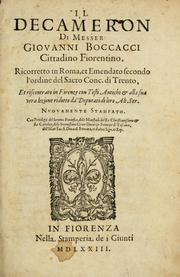 Boccaccio's Florence was experiencing a moment of transition when Boccaccio wrote The Decameron (1349–52, revised 1370–1371). A new mercantile class was coming to power, using their money to encourage the arts based on Roman-Greco culture. The early humanist tendencies evident in Boccacio, Dante and Petrarch later flourished during the Italian Renaissance.

Naples was also a trade centre and cultural crossroads where king Robert d'Anjou was a powerful politician and patron of the arts. Boccaccio probably modelled his literary courtliness theme on the court in Naples.

The emerging mercantile class had no noble ascendancy and their power came from their trade. Boccaccio's literature helped provide a new ethos for this powerful new class.

The Black Plague which spread through Florence in 1348 provided a background for The Decameron. It halved the population of the city and the chaos it provoked is documented in the book.

The Decameron is structured as a frame story which introduces the nested narratives of ten characters who have escaped from the plague in Florence to a safe house. The inserted narratives are the 100 tales they tell each other over a ten day period, plus one more defending Bocaccio against critics.

The main plots include criticism of a corrupt clergy, the dangers undergone by travelling merchants and the conflicts arising between the noble families and the new merchant class.

Boccaccio took advantage of the social chaos caused by the plague to foil social conventions. The brigada of noblemen and women going off together to the countryside with no chaperones would have been impossible in normal circumstances. Just as the author can set up this frame so his characters can also tell unconventional tales due to the social upheaval.

Day 1 The tales are told in the garden. They are on the topics of personal criticism and satire on the Catholic Church.

Day 2 The content chosen is misadventures which have a happy but sudden end.

Day 3 The themes for these stories are lost and found or acquisition through painful sacrifice.

Day 4 The author uses one part of this chapter to write a narrative defense against his use of the vernacular. He was also criticised for associating with young women at his 38 years of age. The topic of love ending in disaster is proposed for the next 10 tales.

Day 5 The theme chosen is lovers who must overcome disaster and have a lucky ending.

Day 6 The narratives deal with someone who uses wit to avoid embarrassment or attack.

Day 7 Stories of wives who trick their husbands.

Day 8 The content is about men tricking wives or the opposite.

Day 10 Generosity is the topic.

In the Preface to The Decameron Boccaccio explains that he wrote it motivated by compassion. His suffering while experiencing love was when he learned about compassion and needing a friendship to help him through. His authorship is an expression of thanks for the help received.

"To have compassion for those who suffer is a human quality which everyone should possess, especially those who have required comfort themselves in the past and have managed to find it in others.“

Many of The Decameron stories deal with love or lust. In courtly love there was no sex but a ritual relationship. Boccaccio shows love as a force of Nature neither reasonable nor deniable. His love is natural, direct and usually consummated.

"Love not only leads lovers to run certain deadly risks, but ... persuades them to enter into the home of the dead pretending to be dead."

However the work distinguishes between love, which is lasting, and lust, portrayed as transitory. It also shows love as physical and the characters are not chaste, including the women, which is a departure from the contemporary tradition.

The Decameron was written during the social upheaval caused by merchants becoming richer and taking over political power from the nobility who had ruled through inheritance during the Middle Ages. Social changes were hastened because inheritances were breaking down due to the ravages of the bubonic plague. This affected both the aristocracy and the poor and facilitated the rise of the middle class.

The brigada of storytellers form part of the nobility while their tales mirror the rough lower classes. Humanism pervades the narratives, contrasted with the behaviours of the narrators, foreshadowing the new sensibilities of the Renaissance.

The brigada, though telling each other stories which exceeded religious morality, met at a church and took several recesses in their activities to worship. Despite this the ecclesiastics in their stories are portrayed negatively as crooks, cheats and blackguards.

"I saw ... no holiness, no devotion, no good work or exemplary life ... among the clergy; instead, lust, avarice, gluttony, fraud, envy, pride."

Boccacio focuses on a humanist vision, the here and now, not heaven, human rather than divine love. He favours passion rather than religious virtue in his clerical characters. These were comical caricatures but the moral is that churchmen live the same lusts and avarice as everyone else.

"Heaven would indeed be heaven if lovers were there permitted as much enjoyment as they had experienced on earth."

Many of the tales told are based on tricks, disguises, bufoonery, untruths, wizardry or distraction. Dressing up is used for appearance to gain sex or cash. Identities are put on and taken off like disguises.

"The nature of wit is such that its bite must be like that of a sheep rather than a dog, for if it were to bite the listener like a dog, it would no longer be wit but abuse.“

Two full days are committed to mostly humorous stories about trickery. The aim seems to be to make the reader laugh. The witty uses their pranks to avoid difficult situations because they are smart. The author underlines these traits as positive even when used as entertainment.

Several stories concern personal relations. There are two full days of storytelling on the themes of tragic and happy tales of love. Infidelities are another topic, especially between younger women and older men. Some of these narratives are based on lust and others end in true love. However both genders get equal treatment inno these fictions.

The epidemic of bubonic plague which hit Florence had no medicinal remedy. Over half the population of one hundred thousand are estimated to have succumbed to this black death.

It changed people's beliefs, some interpreting it as a scourge from God and committing themselves to do penance for their sins. As prayers failed to stop the disease many ceased to believe in religion as an answer to their problems. Other people embraced a life of partying believing that they would die anyway.

The social effects of the plague stopped all work, people fled the city and abandoned friends and family. The economy took a hit because of the worker shortage. This resulted in wage rises due to workers' increased piwer leverage, while productivity decreased. Trading between towns was interrupted to avoid spreading disease with the consequent rise in prices.