- A Guide for the Perplexed by Maimonides 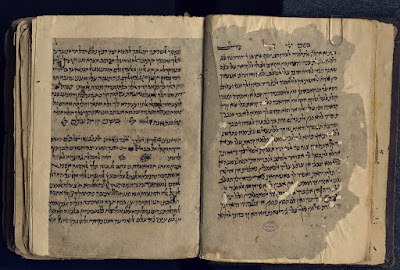 The Arab empire had its inception when Muhammad took control of Medina by expelling two of the Jewish tribes in the city and massacring the third. In the following years he took control of the territory north of Medina in battles with Judeo-Arab and pagan tribes. In 630 he conquered Mecca and in two years the conquest was completed by sending his armies across Arabia. 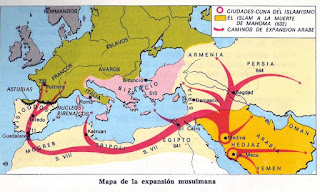 The interest of the Arabs in accumulating and studying Greek writings seems to have two aspects: the motivation was religious and cultural (to know the 'enemy') and their conquests supplied the materials. A lucky historical event helped them maintain their empire and their commercial and cultural exchanges. Some Chinese were captured in Samarkand and they taught their captors to make paper. In the 790's paper mills were built on the rivers around Baghdad, and the material was shipped to all the imperial capitals. Civic literacy, spread by Koranic reading, along with the availability of paper, promoted the means of promoting Islamic libraries. Conversion to Islam and education in Arabic quickly followed. From the streets of Cordoba to the borders with China, the process of cultural transmission, exchange and translation followed the expansion of the new empire.

Moisés Maimonides (1138 - 1204) was a Judeo-Spanish philosopher born in Cordoba.  He foreshadowed scholasticism and influenced Thomas Aquinas, Duns Scotus and others. His aim was to reconcile Neoplatonic philosophy and science with the Jewish Torah.

His major works include various texts on medicine, commentaries on a religious code of Rabbinical Judaism, and A Guide for the Perplexed which harmonized and differentiated Jewish theology and Aristotelian philosophy. He claimed that we should only believe what can be supported by rational evidence, evidence of the senses, or reliable authority. (In this we glimpse a mix of Western ideology in reasoning and sensory evidence and the Eastern tradition of trusting authority.)

A Guide for the Perplexed (1185-1190) is divided into an Introduction and three books.

- The Introduction: Maimonides paints a description of his work its methodology. There follows a treatise on similes then advice of studying the Guide and finally a discussion of inconsistences in authors.

- Book 1 concerns itself on the nature of God and comes to the conclusion that God cannot be described in positive terms. Maimonides employs this line of thought as a deconstruction of the Kalam Islamic school of thought which presented God in human terms.

- Book 2 deals with Aristotelian natural philosophy with its circular spheres, creation theories, time of the universe and ideas on angels and prophecy.

- Book 3 explains a section of the book of Ezekiel and rationalises parts of the Pentateuch legal system.

The opening lines of the Guide are these :

"My knowledge goes forth to point out the way,

To pave straight its road

Lo, everyone who goes astray in the field of Torah,

The unclean and the fool shall not pass over it;

It shall be called the Way of Holiness."

This introductory verse closely parallels Isaiah 35/8. It also reflects John the Baptist's quoting of Isaiah in the gospel (Jn 1/23). It is a daring statement by Maimonides that his Guide is based on the prophets and is also a prophetic work, too, destined to lead the reader. It is a statement about his main proposition :  to philosophise on and interpret the biblical texts in order to guide ("pave straight") the reader.

It is not through proposition that true knowledge can be expressed but through parables, images which capture the imagination. These stories narrate truths by suggestion and indication and liberate them from the formulae of the logos. It is through these tales that the heart can understand truths

The discussion revolves round how far language can transmit knowledge. He concludes that God cannot be described in words and so He is unknowable and can only be described in negative terminology.

The author conceives God as an impersonal source of creation and truth similar to the sun which is an impersonal source of light and energy. The Universe is thought of as flowing eternally from God as its source just as light comes from the sun. He argues that the anthropomorphic descriptions of God in the Torah are metaphors but that we cannot say anything really of the divinity, not even expressed in metaphor. Idols are visual representations of God and metaphors are the same except that they are in words not wood or stone. Suggesting that God can be revealed through words is an idolatry since the divinity remains beyond human comprehension. Silence is the most apt description.

Maimonides' rejection of the positive descriptions of God is actually a rejection of language as a means of knowledge of God, not a negation of theology in itself.

Maimonides incorporated the main Aristotelian teachings into his treatise :

- The soul is part of the physical body, not different from it. It also includes the intellect which is not destroyed with the body at death but continues in a separate form.

- People are social beings. Knowledge is sought for self-improvement and also for that of society.

- Virtue, acting properly, is acquired not only by deciding to be good but by practising good behaviour so as to develop correct habits.

- The Golden Mean is not the Platonic ideal but involves acting according to behaviour pitched between the extremes of deficiency and excess. Courage, for example, is the mean between cowardice and foolhardiness.

In the ideal temple which he describes in the Guide Maimonides place Aristotle and his teachings in the Holy of Holies together with Moses, whom he believed taught like Aristotle. The Jewish rabbis were put out of this holy area and those who thought that, for example, God had a body were classed as ignoramuses.

Maimonides' opponents reacted strongly against his ideas and leading French rabbis denounced his teaching to the Dominican order who led the Inquisition. The author lived in perilous times for those with unorthodox ideas. Some of the more obscure and contradictory passages in the Guide may owe their lack of clarity to Maimonides fear of reprisals if he spoke his truth clearly.