The study of how we know reality, epistemology, has been a fundamental guiding thread in the history of philosophy. The 20th century introduced quantum mechanics: a revolution in natural philosophy's vision of reality.

In 1905, Albert Einstein proposed a theory to explain Planck's dilemma and at the same time another inexplicable connection between lights and electricity: the "photoelectric effect".

Einstein argued that we had to forget the idea that light is a wave and think of it as a stream of small bullet-like particles. The term he used to describe a particle of light was ‘quantum’. For Einstein it was a small point of energy and the light was made up of small particles or quanta. The prevailing physical opinion at the time was that light was a wave, more precisely an oscillation of the electromagnetic field. This dual nature of light, corpuscular and undulating was unlike anything seen before.

Physics relies on experimentation for its advancement, and confirmation of the double state of electrons came in the mid-1920s when an experiment was conducted at Bell Laboratories in New Jersey, USA. They fired a beam of electrons from an electron gun onto a screen with two slots for electrons to pass through. The slots then hit another screen at the back. Scientists discovered that, on a micro scale, physical objects have a dual nature: depending on the circumstances, they can behave as a set of particles or as a wave. The standard interpretation tells us that the electron is launched and collected as a particle, but it propagates as a wave. However, the theoretical explanation did not explain the mechanisms of this phenomenon.

In 1927, Heisenberg and Bohr presented the so-called Copenhagen interpretation of this problem, proposing that wave equations described where entities like electrons might be, but that entities did not actually exist as particles until someone searched for them. The act of observation caused their existence. In Bohr's own words, the entities in question had no "independent reality in the ordinary physical sense". This state of existence, in all possible states at once, was called a coherent superposition: the total of all possible states in which an object can exist. When we look at an object, the overlay collapses and the object is forced into one of the states of its wave function. The Copenhagen interpretation was theoretically tested in a famous thought experiment (a natural philosophy reflection) about a cat in a box: Schrödinger's cat (1935).

The new quantum mechanics imposed two fundamental philosophical restrictions on the theory of knowledge: 1. we can only know the probability of finding a particle in a given place; 2. the observer interacts with what is being observed. As a consequence, the determinism of classical physics is considered an approximation to a reality where the notion of total knowledge seems impossible. Since then the goal of any metaphysical interpretation of quantum mechanics is to account for these epistemological violations.

Einstein was very skeptical of the new explanation. He believed that, although much had been accomplished, the mechanisms of the theory still needed to be understood. He discarded the idea that nature was governed by chance at its most fundamental level stating:

"God does not play dice with the universe". Einstein

For him the probabilistic description of the natural world could not be the last word. There had to be an objective reality, independent of the observer. Quantum mechanics, useful as it was, had to be an incomplete theory. He believed in a deeper level of physical reality where the normality of classical physics existed: determinism and the separation of the observer and the observed.

Niels Bohr, on the other hand, saw quantum mechanics as an expression of the world of the very small. For him, there was no reason why the rules of classical physics should also apply in such a different probabilistic and microscopic domain.

In 1949 Bohr published Discussions with Einstein on Epistemological Problems in Atomic Physics. Here we find the traditional development of philosophical discussion: thesis against antithesis. Bohr's vision was random and microscopic; Einstein's was deterministic and macroscopic. They discussed their respective theses for years.

Behind the Einstein-Bohr debate are opposing beliefs about physics and, more than that, about the nature of ultimate reality. Theirs was a "religious war" fueled by two very different ways of thinking about Nature and our relationship with it.

After the Second World War, the pragmatic decision was made to apply the ideas of quantum theory and stop worrying about the philosophical side. This led to a deep understanding of semiconductors, which helped create the modern electronic age that produced lasers, revolutionizing communications, new medical advances, and advances in nuclear energy. The metaphysical debate about the reality of the quantum world was simply swept under the carpet.

David Bohm was born in the USA. He was invited to work with Oppenheimer on the atomic bomb. However it was found that Bohm had joined the Communist party, briefly seeking compatriots to discuss Hegel. He found none but was marked out as a communist threat by McCarthyism and left the USA in 1951. From then on his theoretical models were also ignored by the scientific community.

He settled in Sao Paulo, Brazil and again showed a dissenting mind by questioning Bohr’s widely accepted Copenhagen interpretation of quantum physics in the paper A Suggested Interpretation of the Quantum Theory in Terms of "Hidden" Variables (1952). In it Bohm put forward an explanation for the double-split conundrum which showed the quantum electron to be both a particle and a wave. He suggested that the particle remained a particle at all times not just when observed. Its behaviour was determined by a hidden ‘pilot wave’ force. This is what governed its motion when passing through the slits. The starting point of the particle is another hidden variable. This contradicts Bohr’s explanation of the inexistence of the quantum particle while unobserved, the uncertainty of its existence as a particle or a wave and the assumption that quantum systems are probabilistic because they function like deterministic mechanisms.

Bohm’s proposition lent a physical rather than metaphysical meaning to the uncertainty principle. He proposed that there was an underlying physical reality to quantum physics which explains things. He also criticised Bohr’s interpretation for implying that quantum mechanics were mechanical in line with Newton’s clockwork universe.

Bohm’s model explains the wave/particle paradox and also retains non-locality, the capacity of particles to influence each other across long distances. This contradicts Einstein who used non-locality to demonstrate a flaw in quantum mechanics because instantaneous correspondence across great distances must be limited by the speed of light. Further, Bohm argued that, despite his clarifying theory of pilot waves, compete understanding of reality was beyond human comprehension

In the early 1960s, John Bell designed an experiment to rule out Einstein and others' theory that quantum physics is incomplete as an explanation. He experimentally proved that the only way hidden variables could explain quantum physics predictions is if they are "nonlocal", somehow associated, and capable of instantaneously influencing each other, no matter how far apart they are. Bell reduced this idea to a single mathematical equation, published in 1964. In 1980 French physicists demonstrated that Einstein’s criticism of quantum interconnection had been wrong and this encouraged Bohm, now settled in Bristol, England, to publish Wholeness and the Implicate Order in 1980. Here he argued that beneath physical appearances (explicate order) there is a hidden system (implicate order). This latter is a field of infinite fluctuating 'pilot waves' which when they overlap appear to us as particles, the explicate order. He further suggested that space and time might be signs of the implicate order.

To understand the implicate order Bohm said physics needed to forget its assumptions about nature. Newton and Descartes had replaced the older organic concept of order with a mechanistic vision. Bohm wanted to encourage scientists to go beyond that and even beyond mathematical thought. He suggested that a belief in a final theory was self-fulfilling and would lead to preventing further investigation in a vicious circle, limiting through belief in the limited. He believed that science gained knowledge but, more importantly, created fresh perceptions.

Bohm was a synthesiser, like Hegel, and his quest was to find the synthesis between Einstein's relative mechanics and Bohr's quantum mechanics, between the macro and microcosms, between art and science. His theory of non-locality actually meant that the universe is physically interconnected at the quantum level which no human will be able to access. This agrees with the mystical traditions which encourage humility faced with the wholeness of the universe. Instead of analysis, quantum theory points towards a process of folding and unfolding rather than a continuum. The Chinese Dao in Taoism refers to the non-subject non-object holistic unity which jars with modern science since it can’t be measured. Perhaps it is science that needs to change that paradigm. A holistic science would allow us to see that reality is interconnected, not patchy but whole.
Loop Quantum Gravity and String Theory

Physicists are still presently working towards a synthesis between Einstein's general irelativity and Quantum mechanics in gravity, the last area of physics in which to apply the quanta insights. This has resulted in two theoretical explanations: string theory and loop quantum gravity.

Carlo Rovelli and others introduced the theory of Loop Quantum Gravity (LQG) in 1988 in an effort to synthesise the notons of time and space from General relativity into Quantum field theory. The problem is to explain time and space as an integral part of the whole, not as a background decoration for an existing stage. LQG analyses the fabric of space time in general relativity to discern possible smaller fibers in the weave. It is the connections between these time space quanta which may integrate them into the overall structure.

Rovelli learned from General relativity that space is not a box but something mobile and dynamic. From Quantum mechanics he deduced that this space is granular and made of quanta. Space is an enormous chain mail. Time is the dance of these granular quanta, their interactions. 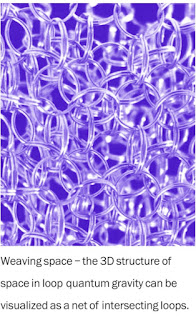 Gabriele Veneziano, working at CERN in 1968 realised that the observed strong force uniting protons and neutrons could be explained by the two centuries old Euler beta function. Gravity from Einstein's theory had been ignored as an explanation because these particles have such a tiny mass. Susskind, Nielsen and Nambu showed that Veneziano's mathematics described the vibration of energy filaments like strands of string. Thus the name string theory. This theory purports to explain all of particle physics, unifying gravity with the other forces. However, string theory posits space and time as  background built on a fixed framework which doesn't account for their dynamic nature as in the relativity theory.

Both theories remain experimentally untested but Carlo Rovelli justifies their efforts within the traditional method of how human knowledge progresses : through syntheses of apparent contradictions:
"Newton discovered universal gravity by combining  Galileo’s parabolas with the ellipses of Kepler. Maxwell found the equations of electromagnetism by combining the theories of electricity and magnetism. Einstein discovered relativity by way of resolving an apparent conflict between electromagnetism and mechanics." Seven Brief Lessons on Physics (2014)