Between 70 B.C. and 390 A.D. the preservation and transmission of the Greco-Roman culture were ensured. The Greeks were a source of thought and the Romans offered a stable empire where it could develop. However, the Roman empire began to crumble in the fourth century because of internal conflict and the border harassment of its legions: the countrymen of Gaul rebelled, there were massive migrations of Goths (369), Christian insurgents in Alexandria (391 ), Visigoth, Arab and Hun invasions that occupied the empire's territories, class conflicts between pagans and Roman Christians and economic mismanagement due to the overtaxation of the merchant class, among other factors. The stability of the empire fell into chaos and with economic restrictions libraries and the traditional preservation of culture also suffered. 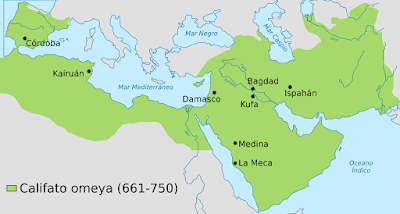 Despite the fact that after 750 there was a civil war within the Arab empire, then led by the Omeya dynasty, its power in the Iberian peninsula remained stable with the capital in Cordoba becoming a world center of knowledge. In spite of the incipient Christian reconquest and the first crusade initiated by Pope Urban II in 1095, there was an intensification of the exchange of knowledge between the Andalusian centers and the rest of Europe. By the year 1275 Christianized Arab merchants had established the first paper mills in Spain. 50 years later the University of Paris employed 10,000 copyists. Even during the Inquisition the exchange of knowledge continued from south to north and the humanistic spirit of the Renaissance was able to expand thanks to the ideas found in Iberia's Arabian books.

The intellectual exchanges were made possible by scholarly pilgrims who traveled to Muslim Hispania to learn about and translate the documentary information that the Arabs stored in their libraries.

The work of pilgrim researchers was to harmonize ancient knowledge with the Christian faith. Between 1150 and 1250 all of Aristotle's writings were translated and introduced to the West along with Arabic commentaries by Avicenna and Averroës.

Duns Scotus (1265 - 1308) studied at Durham and other British universities. In 1209 he traveled to Toledo, became friends with several Arab scholars and wrote his Abbreviatio Avicennæ thus introducing Avicenna to European philosophical discussion. He translated works on astronomy and alchemy and the commentaries of Averroës from Arabic to Latin

Al-Hakam II was invested caliph of Cordoba in 961. He extented the Mosque and occupied the royal residence, Medina Azahara. During his reign he bought books from the rest of the empire for his personal library and that of the mosque and had translations done in Arabic. Cordoba was the largest book market in Muslim Spain.

Alfonso X, the Wise (1221 - 1284) is considered the founder of Spanish prose and it was in his time that Spanish was adopted as the official language. He promoted the organization of three large cultural centers in Toledo, Seville and Murcia. He founded the Toledo School of Translators, which undertook an enormous task of collecting all kinds of materials for the production of books. The king made no distinction between race or religion, bringing together Jews, Muslims, Castilians and Italians in collaboration.

Thomas Aquinas (1225 - 1274). The main challenge of medieval philosophy was the reconciliation between faith (theology) and philosophy (reason). A way had to be found to link the knowledge gained from biblical revelation and the information observed using the mind and senses.

Averroës had proposed the theory of double truth arguing that the two types of knowledge were opposed. Aquino's revolutionary vision rejected this approach, proposing that both types of knowledge were compatible because they came from God. Beyond compatibility, he claimed that they could collaborate because revelation could guide reason and prevent errors while reason could clarify and demystify faith. Within this double conception Aquinas proposed that the existence of God could be proved using five rational arguments.

Among his almost 60 written works, the Summa Theologica stands out, composed between 1265 and 1274. It is a huge effort to unite the thought of Aristotelian natural philosophy and Christian theology. His next work Summa Contra Gentiles is an apologetics of Christian beliefs in the medieval tradition of proselytizing.

Dante Alighieri (1265 - 1321) shows an interest in the works of Aristotle by quoting a dozen of his writings and demonstrates a particular understanding of his Ethics, no doubt through Aquinas' comments. Some historians argue that Dante found Aristotelianism through Albert the Great, a dominican German bishop, and professor of Aquinas, who interpreted Aristotle in the light of Islamic philosophers, mainly Averroës and Avicenna, in addition to Greek-Arab Neoplatonic sources.

Ramón Llull (1232 -1315) wrote his main work Ars Magna (1305-08) with the intention of rationalizing Christian apologetics in order to argue with Muslims. In fact, he traveled to North Africa with this task in mind. He used original logical methods in an attempt to prove the dogmas of Christian theology. After his death, Ars maintained interest, not as apologetics, but in its universal systematization as a compendium of knowledge.