- The Sistine Chapel paintings by Michelangelo

After the fall of the Western Roman empire in the fifth century, the city itself also experienced a descent into decadence. The Roman citizens felt little attachment for their history and so the city was left to disintegrate due to looting. The Church schism in the 14th. century caused the Popes to move to Avignon which was the final blow to the wealth and power of Rome.

The papacy returned to Rome in 1420 and during the next centuries the Popes led the way in rebuilding the city and carving out the Papal States centred on Rome. Through the sale of church offices and income from taxes in the Papal States the Popes gained economic power and control of the city during the Renaissance. The rich Florentine banker family, the Medici, financed the papacy in return for the opportunity to manage the Vatican bank. They also named 4 Popes from the family: Pope Leo X, his first cousin Pope Clement VII, Pope Pius IV, born Giovanni Angelo Medici and Pope Leo XI born Alessandro Ottaviano de' Medici.

Scholarship returned to Rome through the Vatican library which was set up by the bibliophile Pope Nicholas V in 1451 and also financed by the Medici. When Constantinople fell in 1453 he was able to enhance the collection with many Greek volumes without owners. This was the beginning of the transformation of Rome into a Renaissance city which drew strength from its glorious past.

While the city reascended to the splendour it had had in Roman times the Papacy, with the election of Sixtus IV in 1471, fell into moral degradation. Sixtus practised a policy of filling the Vatican posts with family members, some from his own illegitimate children referred to as his 'nephews'. (This coined the word 'nepotism'.) He was also involved in the attempted assassination of Lorenzo di Medici in 1478 in Florence when both families clashed for power in the Vatican. This papal mafia rule became a model for future Popes throughout the Renaissance and led to impoverished moral authority yet political and economic strength.

Sixtus IV redesigned and rebuilt Rome widening streets, destroying the ruins and building the Sistine chapel (1473 to 1481) which is named after him. It was to be the official chapel of the ruling Pope. It's fame derives from the frescos decorating its side walls, ceiling and altar wall. During his reign Sixtus IV had a group of famous Renaissance painters including Botticelli, Perugino, Pinturicchio, Ghirlandaio and Rosselli decorate the side walls with the Life of Moses and Christ with some papal portraits.

In 1503 Pope Julius II, nephew of Sixtus IV, was elected, choosing his name in emulation of Julius Caesar. He saw his main task as the restoration of the Papal States, ruined by the Borgia popes. To achieve this he engaged in winning several wars against other Italian States and the French crown. Machiavelli described him as an ideal prince.

However, he did little to clean up the corruption in the papacy. As a cardinal he fathered at least one illegitimate daughter, Felice. He named four members of his family cardinals. He was also elected Pope by buying the position in an act of simony. (One of his first acts when voted Pope was to make simony an offence in papal elections.)

However, Pope Julius was also the patron of inspirational artistic masterpieces. Renaissance artists flocked to Rome to obtain papal patronage for their art and among them were Michelangelo, Bramante and Rafael, all working for Julius. He charged Bramante with designing the first model of the new St Peter's basilica, Rafael with celebrated mural frescoes in his new appartments and Michelangelo with his tombstone and painting a new ceiling in the Sistine chapel.

Between 1508 and 1512 Michelangelo decorated the ceiling with biblical frescoes. He was chosen to paint the chapel ceiling because of his fame in working on the dome of St. Peter's basilica. The Sistine Chapel represents a pivotal period in art history: the High Renaissance. Under Michelangelo's leadership, the style of painting changed dramatically from the dense detail of Masaccio to the more abstract designs of Leonardo da Vinci. 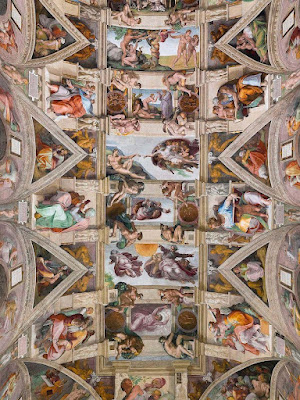 The ceiling was originally decorated with a blue starlit sky similar to the Scrovegni chapel in Padua. The plan was to paint the twelve apostles on the ceiling which traditionally only depicted figures, not dramatic scenes. This project can still be seen in the 12 male and five female prophets placed around the edges of the ceiling. However Michelangelo decided to fill the central spine with nine scenes from Genesis(see image): 3 scenes show the Creation, 3 stories portray Adam and Eve and there are 3 tales of Noah. Below the prophet scenes there are small figures of the 40 generations of Christ's ancestors, beginning with Abraham. Michelangelo completed the project in less than 4 years with an interruption between 1510 and 1511 when he was not paid.

The artist painted the central ceiling stories in inverse order to the bible account by beginning with Noah above the entrance door and moving towards the altar through the Adam and Eve myth and finally to the Creation story. This movement along the ceiling parallels the increasing complexity of the work. The earlier Noah figures use devices from previous works like La Pietà in a display of conservative techniques. The first figures are static and the scenes are small-scale. Increasingly self-confident, Michelangelo did away with preparatory guides such as drawings and reference marks on the plaster. The later figures also display more dynamic movement and complex expression. In the scene showing the creation of Eve, God and Adam are compressed into a small space, despite their grandeur. This has been interpreted as a move away from the Renaissance model of harmony towards the next generation of artists, the Mannerists.

The High Renaissance period, when Michelangelo lived and worked, drew on knowledge from Classic Antiquity, principally the ancient Greeks. Thinkers looked back for inspiration to Socrates, Aristotle and Plato. Cosimo I de Medici resurrected platonic philosophy in the form of Neoplatonism by instituting the Florentine Platonic Academy of which Michelangelo was a student and which translated Plato's writings into Latin. The 3rd. century philosopher Plotinus had set the basis for Neoplatonism by promoting the idea that all souls seek to return to the One. Michelangelo also believed that the artist's function was to bring pre-existent forms out of material:

“the greatest artist has no conception which a single block of marble does not potentially contain within its mass, but only a hand which obeys the mind can accomplish that”

Ian Suk and Rafael Tamargo, from John Hopkins School of Medicine, suggested in 2010 that Michelangelo had concealed three anatomical images in God's neck in the Genesis scene "Separating Light from Darkness". The artist had had a lifelong interest and practical experience in anatomical studies and the suggestion is that he depicted this knowledge secretly in his artwork, inspired by his Neoplatonist beliefs. In a complex reading of the same scene the authors also suggest that the artist has even hidden allusions to Plato's Allegory of the Cave. 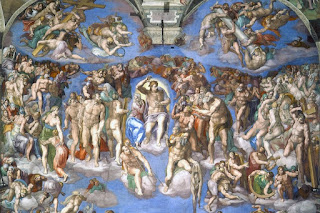 Between finalising the painting of the ceiling in 1512 and the commission to paint the altar wall with the scene of The Last Judgement (1536 to 1541) Rome underwent an invasion by the mutinous troops of Charles V, enemies of the Papacy. They captured the city in 1527 in a riot called the Sack of Rome. It was provoked by the revolt of German, Spanish and Italian soldiers due to unpaid salaries and the search for food. By the next year the lack of food and an outbreak of the plague saw the invaders abandon the city which was left bankrupt. This event marked the end of the Renaissance period in Italy.

1517 saw the beginning of the Protestant Reformation when Martin Luther published his 95 theses demanding the reform of the Church.

Given this background the Church, the city and the papacy sought to reestablish themselves. Pope Clement VII commissioned Michelangelo who was now over 60 to do the work, 25 years after completing the ceiling. The Pope's message, conveyed through The Last Judgement, was that the Church and Rome were making a stand.

Paintings like The Last Judgement usually decorated the back wall so that those exiting the church were reminded of the final message, in all senses. However, Michelangelo's painting is on the altar wall which faces the attendees during the whole service. It appears to be a reminder of the justice awaiting the perpetrators of the sack of the city as well as those who dispute Church power.

The main theme of the artwork is that of the power of Heaven over Hell, good over evil. It is composed of groups and quadrants. The resurrected move upwards from their graves in the bottom left-hand corner towards heaven. Angels pull up a couple with rosary beads while others rise unassisted. One of the figures is caught between an angel pulling upwards and a demon dragging down to Hell. On the right of the painting the figures are moving towards hell and angels push away those who are near heaven.

Around the figure of Christ are placed saints, martyrs and angels: the elect. To the right are depicted apostles such as St. Peter, holding the keys to heaven and handing them back to Christ. On the left is John the Baptist recognisable in his camel pelt. St. Andrew holds his cross next to Christ, St. Lawrence his grate and St. Bartholomew a knife and flayed skin. (He has Michelangelo's face.) St. Blaise holds the wool combs, St. Catherine a wheel, and St. Sebastian the arrows

Michelangelo included pictorial references to Dante's Inferno from the The Divine Comedy. In the bottom right corner are damned soul and their sins: greed has a golden bag of money and keys around his neck; lust is dragged by his scrotum; pride is fighting the whole process. Some of the figures are recognisable: Charon, the ferryman who takes souls to the underworld, is holding up his oar to his passengers and pointing the way to hell. Minos, a judge, meets the damned with his donkey's ears and a serpent biting his genitals. In Dante’s poem, there were nine circles comprising Hell and Minos would wrap his tail, which looked like a serpent’s tail, around his body in the number that corresponded to the circle of Hell.

The 16th. century Renaissance art historian Vasari wrote that Da Cesena, the Papal Master of Ceremonies, complained about the painting's nudes saying that the work belonged in a brothel. Michelangel's reply was to paint Da Cesena as Minos with the snake coiled round him. Da Cesena complained but the Pope refused to change the portrait saying that his authority did not extend to Hell. 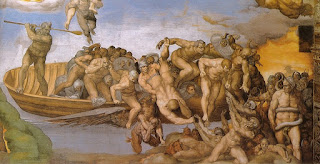 There were other contemporary criticisms about the mix of classical references and religious figures. The central figure of Christ is outlined by a golden yellow light from behind him. It reminded viewers of the Greek mythological sun god Apollo which they thought inappropriate. Christ was depicted as beardless and not seated on a throne, but standing. This was an innovative portrayal and did not conform to the standard biblical tradition.

In 1563 The Council of Trent decreed new rules on Church art, including nudity. Following this conservative Counter-Reformation stance, superstition and indecency were to be avoided and the images in the Apostolic Chapel were covered. In conformity with this decree genitalia were painted over in the fresco by da Volterra, nicknamed Il Braghettone (the knicker maker).

Other art critics have pointed out that Michelangelo chose to portray his figures in the nude through artistic requirements, not religious meaning, in order to impress the viewer through their effects. Muscularity, extending also to female figures, was characteristic of Michelangelo's style and his physical depictions are recognised for their anatomical precision.