Islam was founded in the 7th century AD. by a merchant from the city of Mecca named Muhammad. Prior to the birth of this prophet of Islam, Christianity had become the dominant faith in the Mediterranean and its message was reaching other regions through trade routes. (Mecca was off these routes and it is surprising, then, that Islam was influenced by the traditions of Christianity and Judaism.)

However, it is recorded that Muhammad said that he had been visited by an invisible angel named Gabriel who passed him messages from God. The same character appears as a messenger in biblical accounts. Abraham, Moses and Jesus are considered important prophets in both faiths.

It was in 613 A.D. that Muhammad began to declare that he received messages from Allah and that he was a prophet along the same lines as Jesus or Moses. At first the pagan Arabs of Mecca had an interest in Muhammad's monotheistic creed, but when Muhammad insisted that their ancestors would burn in hell for their worship of false gods they began to reject the new faith. Muhammad was punished with a trade embargo in Mecca. He decided to flee to the Medina in 622 where he was welcomed by the local Jewish and pagan tribes.

From this new base Muhammad organized attacks on the caravans of pagan merchants. In 624 Muslims attacked a heavily escorted caravan and captured many of the merchants. This incident, in Badr, was the first major battle in the Muslim conquest of Arabia.

Muhammad took control of Medina by expelling two of the Jewish tribes in the city and massacring the third. In the following years he took control of the territory north of Medina in battles with Judeo-Arab and pagan tribes. In 630 he conquered Mecca and in two years the conquest was completed by sending his armies across Arabia. 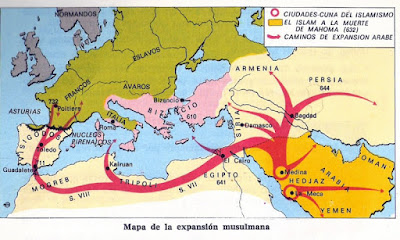 Muslims were ruled by a series of caliphs whose policies followed the territorial expansion begun by Muhammad. His father-in-law Abu Bakr was in charge of suppressing some rebellions against Islamism in the Wars of Apostasy, then began the fight against the two regional superpowers: the Byzantine and Persian Empires. The two had had armed confrontations for almost seven hundred years and were already too weak to mount resistance. The Persian empire collapsed in the face of the Muslim attack. Egypt and Levante also succumbed. Only Byzantium (Constantinople, today Istanbul) resisted.

The Islamist armies then put their efforts into conquering the Maghreb. The Berbers and the Byzantine empire, which Carthage occupied, put up strong resistance. Carthage was taken, then retaken and finally capitulated. In 702 the Berbers were defeated. North Africa was already Islamic.

The conquest was made in one generation. Speed ​​was aided by the Bedouin's preference for the horse instead of the camel, by the power vacuum left by the Romans in Egypt, Carthage and Iberia and later the codification of the Koran, in 653, which established literacy and the Arabian language. Abd al-Malik, Caliph of Damascus, proclaimed Arabic as the language of the empire in 685, a fact that reinforced the implantation of Arab culture in the conquered territories and this language as a linguafranca. The effect was to promote the conversion to Islam of those who wanted to maintain a status within the empire. Religion was not imposed, but adopting Arab culture became the best way to prosper in the conquered lands. Thus souls were conquered because the Islam religion was closely linked to the language. In any case, they preferred to be tolerant of the religious customs of the invaded peoples, but, like the Persians, they demanded tribute.

The caliphate continued its conquest by crossing the Straits of Gibraltar and invading the European continent. Visigothic Spain was dominated in a few years and the invaders reached Tours in 733 where they were rejected and progressively forced to retreat to the south until they surrendered in Granada in 1491. Then the border between Christianity and Islam was established by the Mediterranean Sea.

In 100 years the armed Islamic caliphate had conquered all of Arabia, North Africa and a territory from Spain in the West to Afghanistan in the East. It was the largest known empire and controlled some of the most important centers of civilization such as Jerusalem, Alexandria and Antioquia. Only Rome and Constantinople remained Christian. In future the ares of confrontation between the two faiths would be Jerusalem, Constantinople and the islands of the Mediterranean.

The Arab expansion, despite its bellicosity, was the source of a vast culture. Promoted by the encounter between civilizations on the east-west trade routes, improved and maintained since the time of the Persian Empire, the Arabs followed the Persian tradition of intellectual research. There were classical research and transmission centers in Edessa, Gundeshapur, Alexandria, Constantinople, Baghdad, and Damascus. Books written in Greek, Latin, and Persian in fields such as medicine, alchemy, physics, mathematics, and astrology were collected and translated into Arabic by Muslim researchers.

In 528 Justinian, emperor of the eastern Roman empire, decided to close the Academy of Athens in Constantinople that had served for centuries for the preservation of Greek texts. The writings and their thought moved to the Middle East to centers such as Nisibis and Odessa, where translations of Aristotle into Syrian had existed since the 4th century. The Republic of Plato was also translated into Persian and Arabic in the 5th century, and the Persians welcomed Neoplatonic texts. Such was the eagerness for knowledge that the Arabs in Damascus actively sought and bought transcribed copies of this material.

The interest of the Arabs in accumulating and studying Greek writings seems to have two aspects: the motivation was religious and cultural (to know the 'enemy') and their conquests supplied the materials.

A lucky historical event helped the Arabs maintain their empire and their commercial and cultural exchanges. Some Chinese were captured in Samarkand and they taught their captors to make paper. In the 790's paper mills were built on the rivers around Baghdad, and the material was shipped to all the imperial capitals. Civic literacy, spread by Koranic reading, along with the availability of paper, promoted the means of promoting Islamic libraries. Conversion to Islam and education in Arabic quickly followed. From the streets of Cordoba to the borders with China, the process of cultural transmission, exchange and translation followed the expansion of the new empire.
Ibn-Sīnā, Avicenna, (c. 970–1037) was a philosopher and physician of the Islamic world. He synthesised the different contents of philosophical and scientific thinking of Greek late antiquity and early Islam into a rigorous and consistent scientific system. It explained all reality, including the beliefs of revealed religion and its theological discussions. As a compendium of science and philosophy it is the high point of the 6th century Greek tradition and the beginning of Arabic practice in the 9th century.
Averroës (Ibn Rushd) was a Cordovan born in 12th century Muslim Hispania. After his death his comments on Aristotle had a great influence on the development of scholasticism in Europe where he was known as 'The Commentator'. In the Islamic world he defended Greek philosophy against theologians of Muslim orthodoxy.

For Averroës, contrary to Avicenna, there was no conflict between religion and philosophy and he argued that they were two ways to get to know the same truth. He dared to argue that reason and philosophy were superior to knowledge by faith. The Islamic authorities of Cordoba condemned him for excessive rationalism and he was exiled to a town outside the city. He believed in an eternal universe and a soul. He also adopted the radical idea that 'existence precedes essence', an idea that was developed by existentialism in the 20th century.

Moisés Maimonides (1138 - 1204) was a Judeo-Spanish philosopher born in Cordoba.  He foreshadowed scholasticism and influenced Thomas Aquinas, Duns Scotus and others. His aim was to reconcile Aristotle's Neoplatonic philosophy and science with the Jewish Torah.

His major works include various texts on medicine, commentaries on a religious code of Rabbinical Judaism, and A Guide for the Perplexed which harmonized and differentiated Jewish theology and Aristotelian philosophy. He claimed that we should only believe what can be supported by rational evidence, evidence of the senses, or reliable authority. (In this we glimpse a mix of Western ideology (reasoning and sensory evidence) and the Eastern tradition of trusting authority.)