In 1877 German geographer and historian Ferdinand von Richthofen named the ancient trade routes connecting the Euroasian continent from the Atlantic to the Pacific as The Silk Road. They were the first steps to global trading established well before those to the Americas.
This presentation of the trade routes' history favours maps with short explanations because the geography portrays the story better than words. 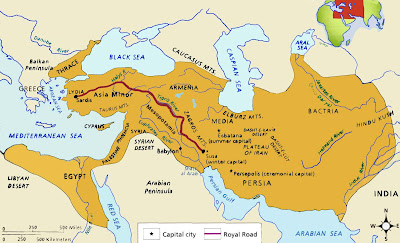 The continent wide routes began with the internal communications of the Persian empire founded in the middle of the first century B.C. Herodotus, the Greek historian, relates that the Royal Road communicated Persia's Mediterranean city of Ephesus to Babylon and the capital in Sousa, a distance of 1,500 km and linked by pony express in 7 days. This was the foundation route of the Silk road.

Persia added Egypt and the eastern Mediterranean border territories around 525 B.C. and by 580. the empire stretched from the Mediterranean to the Indus valley in the east. The Persians methodically connected their empire with a network of trade routes studded with guarded trading posts every 20km ensuring safe commercial exchange. These doubled as information links maintaining imperial order across the vast territory for two and a half centuries. The main threat came from the tribes on the northern steppes who were skilled horsemen but the Persians turned that in their own favour by trading for horses, needed to speed up commerce and protection.

Overlaying the Persian and Hellenistic empire maps it is notable that they fit almost exactly. This is because Alexander the Great invaded the Persian empire from Macedonia in 334 B.C. and conquered its territory by using the Persian's own communications network. He also used the Persian strategy of expansion and defense by placing staging posts along the routes which also encouraged trade. Alexander also took over the empire's breadbasket, Egypt, in 332 B.C.  However the Greeks added another weapon of power in Alexandria > information in the form of a great library which his successor Ptolomeo I built. The Greek language, koine, became the empire's linguafranca and the cult of Apollo  reached the Gundhara valley in India in the form of statues. This prompted the Buddhists there to reinforce their religion by making statues of Buddha. 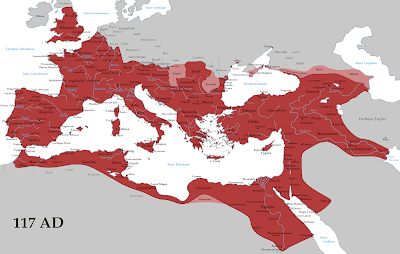 After taking the coastal towns in the Italian peninsula the Roman army moved East to invade Macedonia (197 B.C.) and annex Greece in 27 B.C. The next prize was the Mediterranean's chief grain producer Egypt captured from Cleopatra, the last of the Ptolomeic lineage, in 30 B.C. With Greek culture occupied and cheap food now available Rome looked West. However, there was not much of interest there except some gold and tin.  Gaul was colonised in 52 B.C. and England made a province in 43 B.C. and roman roads ensured their armies' control of the territories. However warring tribes and poor trade pickings made the western provinces much less  desirable compared to the luxuries that the East offered. Trajan turned to the Orient invading Mesopotamia in 113 A.D. Though the empire did not include the Indus valley like Alexander's or the Persians the Romans began trade with the East through shipping routes from their Egyptian province on the Red Sea. It is estimated that ships plied the Egyptian-Indian trade route at a regular rate of two  week. The province exchanged grain for topaz, tin, ivory, gemstones and spices. Roman income also depended on taxes. They exacted a poll tax on Egyptians and carried out a tax census in Judea at the time of the birth of Jesus of Nazareth as the gospel stories relate.
Faced with barbarian incursions in the west, in 324 A.D. Constantine moved the imperial capital east and established Byzantium (Constantinople), nowadays Istanbul, as the new capital with Christianity as the empire's religion. The move to the east was logical because the most lucrative trade cae from the orient, and China was still an unknown.
/ China > 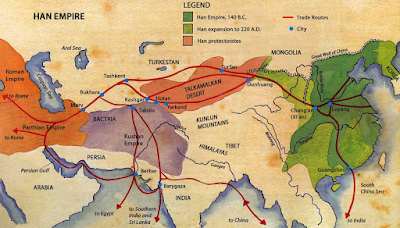 As early as the VII century B.C. the Chinese began building the great wall to keep out nomads from the north who were considered dangerous barbarians. At the time of the Hellenist empire China was still adding to the wall. Horse trading was carried on with these tribes and peace was bought through gifts. The Romans traded as far as India but did not reach China, though one roman embassy to Huan is recorded in 166 A.D. The Chinese maintained a belief in huaxia, a belief that outsiders were barbarians. Trade was local with land commerce outside the country beginning in the third century B.C.
It was the Han dynasty (206 B.C. to 220 A.D.) that determined to move west and defeated the tribes blocking western routes. In 119 B.C. the Gansu corridor was opened for trade and a passage of 600 miles to Dunhuang liberated. This marked the creation of the Silk Roads. From Dunhuang two routes were traced to Kashgar to the north or to the south of the Talkamalkan desert. Once again the route split. The southern road ran through the Hindu Kush mountain valleys where the Kushan empire acted as intermediaries between east and west. The northern way led through Tashkent and Samarkand. Thus the route to the former Persian capital Sousa Palmyra and Petra were further trading spots between Arabia and the Mediterranean. China also traded west through shipping routes to India and the Persian Gulf as well as to Egypt. These overland and sea routes connected the whole Euroasiatic continent and one of the main goods was silk.
After 1492 with the Spanish discoveries in America the economic centre of the world was displaced west to Europe and the overland Silk Roads declined, though the shipping trade routes remained.
Email ThisBlogThis!Share to TwitterShare to FacebookShare to Pinterest