- History of the Peloponnesian War by Thucydides 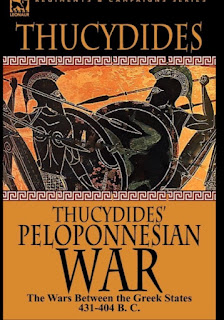 The only historian previous to Thucydides (c. 460 – c. 400? BC) whose work is extant was Herodotus (c. 484–c. 420 BC) who focused on the Greco-Persian wars (492–49 BC). Thucydides concentrated on a different, internal, war between Athens and Sparta. In methodology he compares to Herodotus as more modern since he emphasises research and excludes colourful anecdotes. He is also more abstract in concepts and expression and relies on objective evidence rather than personal reminiscences.

The historical context of the work is Athens' rise to power. After the final defeat of the Persians by the Greek fleet at Salamina in 480 BC, Athens began its golden age. They built the Parthenon, instituted government by direct democracy, promoted Greek drama and witnessed the growth of philosophy and rhetoric. It was the age of Pericles, the decades following the decisive naval battle.

The Greek dramatists Sophocles and Euripides were contemporaries of Thucydides and they also dealt with war and its problems. A generation previously Aeschylus had written The Persians, 472 BC, which is based on the battle of Salamis. Hubris and Nemesis (pride before a fall) is a moralising theme in the tragedy, as it was in the History of Herodotus. In Aeschylus it refers to Persian arrogance but spectators could also see a warning of the growing panhellenic leadership of Athens which would bring about a war with Sparta. This is indeed what Thucydides presented In Books 6 and 7 when the Athenians were defeated at Syracuse. The same theme is found in the Poetics of Aristotle a century before which represents Greek drama as downfall through hamartia (error). Thucydides' History can also be read as a tragedy since the Athenians blundered into the war with Sparta through violence, hubris and ambition.

The History of the Peloponnesian War, is an account in 8 books of the 431-404 BC conflict between the Delian League led by Athens and Sparta's allies in the Peloponnesian League. It was written by Thucydides at the outset of the war in 431 BC as an attempt to apply analysis and research to understanding current events. Indeed Thucydides had been an Athenian general until the capture of Amphipolis which he was blamed for and exiled. He used his banishment to travel round the Peloponese and view the conflict from both sides. The History ends abruptly in 411, seven years before the end of the war.

Book 1. Thucydides presents his method and introduces himself. He offers a synopsis of Hellenic history and the 3 key controversies leading up to the Peloponesian war which began just after the Persian war. He maintains that the basic causus belli was Sparta's fear of the growing Athenian influence in the Greek world. Book 1 ends with Sparta's declaration of war on Athens.

Book 2. Thebes invades Platea and Athens' involvement on behalf of its ally. It describes the initial three years of war and establishes Athenian seapower and Spartan power on land. Athens is struck by a plague which kills its leader Pericles.

Book 3 deals with the next three war years. There is a revolt in Lesbos and a debate on punishment for the instigators. Plateau surrenders to Sparta after a famine. There is civil strife in Corcyra over democratic rule. Sparta plans an attack on Athens which is cancelled due to earthquakes.

Book 4 follows the next three war years. The Spartans request a peace treaty after two defeats. The Athenian demands for the return of land leads to the talks breaking down. The Sicilian states gather in a peace conference as protection against Athens. Sparta and Athens agree a one year peace but it breaks down

Book 5 deals with the tenth to sixteenth years of the war. The Spartans win two important battles at Amphipolis and Mantinea. The two contending sides establish a peace treaty and an alliance. Athens demands that neutral Melos join the alliance. When Melos refuses the Athenian troops commit a massacre on the island.

Book 6 covers the 16th. and 17th. war years in Sicily which Athens decides to conquer and so sends a huge invasion fleet. They take Syracuse and the Sicilians appeal to Sparta for help which they accede to using Corinthian ships.

Book 7 is about year 18 when Athens is severely defeated in Sicily suffering a naval rout and on retreating by land they are captured and killed or enslaved.

Book 8 analyses the results of the Athenian defeat in Sicily. Sparta establishes an alliance with Persia. Democracy in Athens is overturned by an oligarchic coup in 411. The Athenians win a naval battle. There is an abrupt end to the book in mid sentence.

Thucydides sets out his method in Book 1. He discards opinions, poetic tales and romance narrative. His aim is to provide a useful history.

"... a permanent legacy, not a showpiece for a single hearing."

He intends to do this by selective arrangements of his information. He recognises that eyewitnesses often contradict each other depending on ideology or memory. The historian must discriminate between appearance and reality and between pretext and motivation.

One example of the author's method of reaching the truth of the matter was interpretation of the visit of the Persian Tissaphernes to Aspendus (Book 8). He analyses three theories: the satrap was trying to exhaust the Pelopenesian morale; he was out to make money; he was trying to change his image among the Spartans. After presenting these possibilities he states his own opinion based on evidence: Tissaphernes was attempting to contain both Athens and Sparta.

In Book 1 the Athenians falsely assert that their empire was not obtained through the use of force. However they admit that prestige, fear and self-interest were key motivations. On the other hand, Pericles states that they maintain their hold in a tyrannical manner. The Athenian politician Cleon also declares that the empire is a tyranny and they must forget equity. When Athens faced the Melians justice is discarded and the Athenians tell them clearly in Book 5:

"the dominant exact what they can and the weak concede what they must."

In the account of the expedition to Sicily in Book 6 Alcibiades voices the real reason, more power:

"we have no choice but to keep hold of our present subjects and lay designs on more."

The defeat in Sicily sets in motion a wave of more violence: Euboea rebels, there is civil strife in Samos and democracy is overturned in Athens. Thucydides implies that violence begets violence.

The Athenian cultural context included the Sophists who taught persuasive rhetoric for a living. They claimed to be able to teach anyone how to make a weaker case appear stronger. Plato analyses their methodologies in Gorgias. Thucydides tends to use sophist methods in his work by presenting ideas through contradictory debates. He also uses Gorgias' approach of tone and semantics to persuade, Prodicus' etymological technique and Antiphon's contrasts between actions and reality, word and appearance.

However, Thucydides recognises that rhetoric can have both favourable and disadvantageous results. Cleon and Alcibiades use it reprehensibly, while Pericles makes creative use of it.

Thucydides expresses a belief in chance as a key element in war, and indeed life. The outbreak of plague in Athens just after the beginning of war is presented as a prime example in Book 2. Apart from the physical effects the disease changed Athenian politics through the death of Pericles. His successors lacked his charisma and moderation.

The events at Pylos described in Book 4 are an example of misfortune. An Athenian fleet is forced to take shelter in Pylos due to a storm. General Demosthenes encourages his troop to fortify the post and because of the poor weather delay the soldiers have more time to fulfill the plan. The Spartans pay no attention to these events, but when they enjoin battle for the place in 425 BC the Athenians are able to defend it with ease. This was a decisive Athenian success at the beginning of the war.

In Sicily Athens is the victim of chance when a lunar eclipse influences General Nicias to postpone the retreat by a month. As a result the army was more exposed to attack and ended up defeated.

Thucydides uses the successors of Pericles to point out the negative effects of ambition. He writes that they:

"pursued policies motivated by private ambition and private gain, to the detriment of Athens herself and her allies."

Their error was to indulge popular impulses in order to maintain personal power. He accuses Cleon of demogogery.

The author blames Alcibiades for ambitious self-interest supporting the invasion of Sicily. His extravagant speech which contrasts with the moderate discourse of Nicias reveals him to be overly self-assertive in his quest for power.

The Athenian conquest of Sicily is shown to be flawed from the outset. Athens has little information on the topography of the island. Alcibiades is also dismissive of the population describing them as probably incapable of uniting despite there having been two instances of successful calls to unite, as Thucydides reports in Books 4 & 6.