- The Persians by Aeschylus 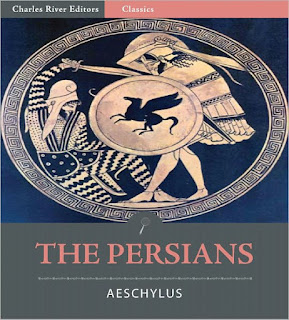 The tragedies of Aeschylus have a moral background. Some illustrate the idea that we cannot escape the evil deeds of our ancestors and the consequent divine retribution. Others stage the conflict between the individual and the state, between humans and the gods and the fight against the old enemy, Time. Another theme is the threat that violence can exert on reason and persuasion, in short rhetoric verses brute force. The Persians displays a strong traditional belief in the gods who appear as puppeteers with human emotions. Individuals with strong human sentiments also have main roles in the drama and the audience is invited to sympathise with them through dramatic catharsis. The philosophy of the play is a compromise between human morality in warefare, empathy for the defeated enemy and fear of the gods. It is a transition between the vertical and the horizontal worldviews.

The Persians is the oldest extant drama in Western literature. It is the only remaining play from a trilogy. It dates from its first performance at the Dionysia festival in 472 B.C. where it won an award.

It is based on the historical Battle of Salamis (480 B.C.). Xerxes, the Persian King, attacked the Greeks by land and sea to avenge the Persian army defeat at Marathon ten years earlier. The Spartans defeated the land invasion at Thermopylae; the Greeks won the sea battle at Salamis. It is probable that some in the audience may have participated in the battle, as the author had, since it had taken place only 8 years previously.

The play is outstanding for it's time since its theme is recent history. The usual topics for the period were myths about gods, heroes or the remote past.

A chorus opens the play in Susa, one of the Persian capitals. The Queen mother, Atossa, enters. While she is waiting for news of the invasion of Greece she recalls a nightmare about her son. (This is the earliest known dramatic portrayal of a dream.)

A breathless runner arrives on scene with the news that the Persian fleet has been defeated at Salamis and describes the gory details. He lists the names of the fallen generals and confirms that Xerxes is still alive and returning home. The messenger echoes the jingoistic Greek war cry:

Atossa journeys to her husband, Darius', tomb to ask his spirit for help. Darius appears and criticises his son Xerxes as foolhardy. He is angry that Xerxes has built a bridge across the Hellespont which will make Persia vulnerable and has irritated the gods. He prophesies that the Persians will suffer another defeat at Plataea.

The drama ends with Xerxes' return in a despondent mood for the defeat caused by his own hubris. The chorus ends the play performing a lamentation.

- The chorus is a group of wise men used to give state advice to Atossa while Xerxes is away at war. Their dramatic role is to act as narrators about the preoccupations of the Greek citizens and voice conclusions about the war.

- In his dramatic narrative Aeschylus suggests that human suffering is the result of divine punishment for transgressions. In The Persians Xerxes brings on his own downfall and sorrows by overstepping his human bounds through excessive pride. By narrating actions from the point of view of the defeated Persian enemy instead of the local national victors Aeschylus interprets the historical events as a drama of defeat in general. He also analyses its causes in hubris, its punishment in nemesis and the cathartic effect on the audience.

Xerxes ran into conflict with the gods through his arrogance. The initial chorus of the play describes the massive army of generals, horses and ships he commanded and the ruler himself as "glittering like a god his radiant state displays." He is compared to his father, Darius, who is described as a "god-like king." These divine attributes of the Persian leaders have aroused the jealousy of the gods and Xerxes' fate is thus sealed before the war begins. The gods will exact retribution from him in a vengeful nemesis.

The drama underlines the Greek belief that the gods were just as emotionally motivated as humans and so they would react negatively to any mortals who got above themselves. In Atossa's nightmare the playwright foreshadows the fall of Xerxes when one of the two sisters, symbols of the coasts at the Hellespont, smashes the king's chariot. His mother foresees his death in this episode in a warning of the gods' nemesis.

Xerxes builds a floating bridge over the Hellespont to provide a crossing between mainland Persia and mainland Greece. He uses the bridge to punish the sea gods for obstructing his father's invasion. The chorus describes this act as recklessness. It is interpreted by the divinities as hubris,  an arrogant defiance of the gods of the sea. Darius' ghost warns that his own success was frowned on by the gods and now his son Xerxes has angered them more by taking fate into his own hands:

“Although a mortal, he thought to have power over all the gods, but not with good counsel.”

The father also suggests that the gods favour the Greeks and tells his wife Atossa not to send another army against them. Xerxes' defeat is the will of the gods. He returns home in a dilapidated state, humbled by the gods who have, through nemesis, avenged themselves for the hubris of an upstart human king.

A chorus of old men narrate the story and represent the Athenian spectators' viewpoint. The audience see the suffering inflicted by war, especially the Persian losses which are dramatised by hearing the list of deaths and seeing a proud Xerxes returning home with his clothes in tatters.

The chorus is also used to encourage the Greek spectators to empathise with the Persian grief. In a dramatic cathartic effect: they are invited to apply the lessons of the drama to themselves. Aeschylus was a playwright and a soldier who had fought at the Battle of Salamis. He had experienced war at first-hand. It is possible that he had concluded that in the end there are no real victors in war but both sides lose. The author is saying to his countrymen that they are victorious but also that they shouldn't get overpresumptious or their country may end up with the same fate as Persia.

The Persians lists the many satraps, chiefs, cavalry, ships and infantry who marched to war with Xerxes. The play also records the names of the generals who died in the war and their territories and weapons.

There is a certain ambiguity in the play regarding imperialism. Athens can be seen in the drama as a saviour who defended the Greek mainland against the mighty Persian empire. The tyrant here is clearly Xerxes. However, there existed a panhellenic identity and Athens aspired to be its leader. This imperial desire would shortly create enmity between Sparta and Athens in their struggle for power in the Peloponesian war (431–404 BC).

It can be argued that The Persians is a forewarning of the dangers of all imperial expansions. Historically the Classical Age of Athens and its empire ended in 404 B.C by their defeat in the Pelopenisian War.

There is a Western narrative that had Greece been defeated and invaded by Persia in 480 B.C. Greek democracy, literature and philosophy would not have flourished.

History gives some pointers to the answer. 150 years later in the Macedonian conquest by Philip, Alexander and the succeeding warlords Athens was a pawn among competing kingdoms formed by the carving up of Alexander's empire: the Selucids in Asia, the Ptolemies in Egypt and the Antigonids in Macedonia. Wealthy citizens increasingly took over power in these new kingdoms. They had the ear of the rulers and so became the real powers within the kingdoms. This is the logic of imperial rule: power in the hands of a few. If the Persians had ruled in Athens it would probably have been the same, rule through cronyism, except that it would have occurred a century and a half earlier.

As regards tragedy it existed before the Persian invasion and in fact was born under the Peisistratid tyranny in Athens. Tragedy did not need democracy to flourish.