- The World as Will and Representation by Schopenhauer 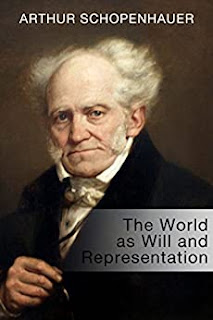 Arthur Schopenhauer, (1788-1860), often called the “philosopher of pessimism,” was primarily important as the exponent of the metaphysical doctrine of the Will in immediate reaction against Hegelian idealism. His writings influenced later existential philosophy and Freudian psychology.

Germany did not participate in the late 18th. century European movements for national unity motivated by liberty. It remained under the strict authoritarian rule of the Holy Roman Empire of German Nations. After the defeat of Napoleon at the beginning of the 20th. century the French occupied states in Rhineland and Prussia began reformist movements. A demand for national unification was motivated by resistance against French occupation.

In 1814 the political map of Europe was redrawn at the Congress of Vienna. The aim was to restore pre-revolutionary order: a balance of powers and princedoms in Germany. This system was effective in suppressing activists for some time and Metternich established a police state in 1819 which suppressed opposition. It was against this background that Marx and Engels, followers of Hegel, composed the Communist Manifesto arguing for a popular rise against oppression.

Thinking in Germany turned away from the reason based philosophies of Leibnitz and Kant towards the concept of reason as the Will to dominate. Life was conceived of as romantic, not rational. This pessimistic view of living favoured passion and subjectivity.

Schopenhauer's philosophy inverted that of Kant, turning reason into an expression of Will. The pessimistic bent of Schopenhauer's thinking focused on the frustrating abyss between his idealisations and reality. Kant's found objectivity in reason removed from sensation; Schopenhauer asserted that experience and sensation are basic, that we experience ourselves in the embodied Will. He criticised kantian philosophy for disdaining love, sexuality and artistic passion. He asserted that the freedom of reason was illusory. Thought may appear free, but freedom resides in recognising the Will.

For platonic thought eternal ideas are outside the caves and the shadows are the illusions that bind us. Schopenhauer sees the shadows as abstractions and the sun outside is the Will of the Cosmos. Reason is delusional; desire is reality.

Hegel argued that Kant's void between ideas and reality could be surmounted by reason and his dialectics. Schopenhauer disagreed completely. He also rejected Hegel's conception of the West as the summit of civilisation and argued that society is a struggle of Will which explains the constant human conflicts. He denied progress and asserted a cyclical conception of time.

In religion Schopenhauer was a declared atheist, though possibly influenced by Indian thought described in the Upanishads, in Vedanta and Buddhism. He recognised certain parallels between the Four Noble Truths of the Buddha and his own philosophy of existence as suffering and Will. The author believed that Will and desire, the essence of all things, cause thought. He also held, like the Upanishads, that there is a basic unity in the Cosmos, summarised by the saying: 'That is you'.

Regarding the opposition science/art Schopenhauer argued that science was dividing humanity; art was uniting humans with the Will, the whole, the true essence. Kant promoted reason as uniting humanity in the universal idea of self. Schopenhauer believed that this was accomplished by the Will, an idealisation of the world. Apart from this recognition of truth, human existence swings between pain and boredom.

There exists an escape from the self and Will: Art, which reunites us with the whole. For the author the highest form of art is music since it has no visual representation. The next greatest art is tragedy which is the unified Will in conflict with itself.

The world as will and representation (1818) is made up of four books: epistemology, ontology, aesthetics, ethics. (In 1844 Schopenhauer published a second edition adding clarifications and reflections on the first, though there was little change in his opinions.)

The opening line of the work is “The world is my representation." This is a succinct summary of Schopenhauer's epistemology: idealism.

He describes reality as ideas, the object of experience in the perceiver's mind. These ideas conform to the principles of sufficient reason: physical form(becoming); mathematical form(being); logical form(knowledge); moral form(action).

The author explains in another text that each principle refers to a category of possible objects in the perceiver's mind. Being refers to abstract representations and concepts. Knowledge determines a priori intuitions of space and time. Action guides acts of the Will.

This is a description of the world as Will. Schopenhauer asserts that there are two sorts of ideas: primary, which are perceptions and intuitions, managed by understanding; secondary, that include abstractions and representations connected to reason. Concepts are representations of representations, which means that all representations are objects of experience and viceversa.

All ideas are expressions of the Will which is a thing-in-itself (noumena), not an idea. The Will is the fundamental reality of the world and all phenomena are dependant on it. It cannot be studied and is thus outside the grasp of knowledge. The Will is the driver of action but it lies outside human awareness and so all actions are deterministic, not rationally programmed, so it may be irrational. It is independent of time, space, plurality, causality, reason or motivation.

This book is about aesthetics and reviews Plato's ideas on art and focuses on genius and music as the core of artistic theory.

Platonic idealism puts beauty at the centre of art. Schopenhauer argues that art is the direct objectivity of the Will. It is a means to obviate reason and see things differently. However, science is a way to view things following sufficient reason.

This section deals with ethics. Happiness, for the author, is impositive since it is not lasting. However art can relieve suffering by becoming eternal.

The Will is selfish and self-satisfactory. Egoism is individuals' interest for themselves. Altruism exists, but is temporary. Morality is a voluntary renunciation of selfishness, which is a negation of the Will to live. The author's moral asceticism is similar to Buddhist theory in its reducción of willpower, the origin of unsatisfied desires.

Suicide is considered by Schopenhauer as abandoning life, the will to live, since the Will is indestructible.

The human condition is pitiable for the author, since to avoid unhappiness we must deny the Will, but to do that is to deny reality and its representations. Happiness would be becoming nothingness, negating the world of phenomena.

The World as a Representation

Schopenhauer argued that there were two ways of viewing reality: - as Will, the fundamental thing-in-itself (noumena); - as Representation, how reality appears to us when processed by our brains.

The author followed Kant in his epistemology of transcendental idealism. Kant argued that empirical reality consists of appearances in the mind of mental representations. Schopenhauer accepted the existence of empirical reality but asserted that our knowledge of it was indirect.

The World as Will

Reality as Will (Wille) is Schopenhauer's formula for the world viewed in itself (noumena), its essence. This world-in-itself exists outside human norms of space and time. Human representation of reality depends for its interpretation on reason. Will, the essential reality behind human representation, has no final purpose and is illogical, conflicting with rationality and condemning humanity to a life of suffering.

According to Schopenhauer, there is a way out of this miserable life. It comes through the knowledge that individuality is an illusion. This is recognised by the great mystic saints (for example those of the Spanish Counter Reformation such as Teresa of Avila and John of the Cross). Each

"recognizes the whole, comprehends its essence, and finds that it is constantly passing away, caught up in vain strivings, inner conflict, and perpetual suffering".

The author recommends negation of the Will through ascetic practices which will result in a redemptive 'Will-less' state, free from exertion and suffering. (This is similar to Buddhist meditation to reach nirvana.)

Kant had reacted to Hume's sceptical attack on causality by openly demonstrating that it is a priori. Kant declared that the empirical content of our perception is fed to us from the exterior. Schopenhauer questioned the concept that sensorial input could be understood as the objective perceptions of exterior objects. He thus agreed with Kant, against Hume, that objective perception assumes knowledge of causality.

"Our own agency provides us with a full understanding of causation which then permeates and structures our experience of the world in general."

Schopenhauer emphasises the intellectual nature of perception. The sensorial input is the raw material with which the brain produces reality as a representation.

There is no freedom in human behaviours, according to Schopenhauer, because they are events of appearance and made necessary by the motives and character of the person. However, the Will, as a noumena, is not restrained by any necessity.

Schopenhauer asserts that ethics is not prescriptive but investigative. The task of moral philosophical is to explain what it observes, not set up theoretical rules.

The author's benchmark for ethical behaviour is compassion. The selfish individual insists on the difference between two people; the altruist feels the suffering of others as personal. The latter is moved by compassion and that is the foundation of morality. Schopenhauer extended this to animal welfare:

"The assumption that animals are without rights and the illusion that our treatment of them has no moral significance is a positively outrageous example of Western crudity and barbarity. Universal compassion is the only guarantee of morality."

For the author the cause of suffering is human 'willing': desires, longings, appetites... One way to escape this misery for a time is through contemplating art. It is a means of changing from observing things to understanding Plato's Forms which are liberated from the Will:

"it is as if the object alone existed without anyone perceiving it, and one can thus no longer separate the perceiver from the perception, but the two have become one, the entirety of consciousness entirely filled and occupied by a single perceptual image"

Object and subject are fused and the idea is brought to the fore. The perceivers are aware only of ideas, not objects, since they are both one. Art portrays the essence of reality, especially music which embodies the Will itself.

There was a pessimistic outlook among Schopenhauer and other German thinkers at the beginning of the 19th. century. This may partly be the outcome of contemporary Romanticism which encouraged a view of life as irrational, not reasonable as portrayed in the tradition of Kant and Hegel. Pessimism may also be a result of the social isolation of Germany, cut off from the political reforms of other Western countries. The populaces of the US, UK and France had won new rights during the previous century but the German principalities remained autocratic and oppressive.

Nietzsche, a follower of Schopenhauer, adopted his pessimism and the Danish philosopher, Kierkegaard, too. Sartre sustained that Nietzsche and Kierkegaard were the founders of Existentialism, though neither had used that word.

Schopenhauer at first influenced more artists than philosophers, though both Wagner and Wittgenstein recognised his importance. Freud and Jung also acknowledged his authority. The idea of the absurd in Camus and Tolstoy was attributed to the influence of Schopenhauer. Borges declared that he never penned his own philosophical system because Schopenhauer had already written it.