The Pantheon as its names suggests is dedicated to 'all the gods'.  Agrippa had it built in honour of Augustus during this emperor's reign (27B.C. - 14 A.D.) and both their statues may have stood outside. The building burned down twice and finally Hadrian replaced it with the present one c.126 A.D. and, confusingly, retained Agrippa's name on the pediment. Its use is uncertain but Hadrian occasionally held court there. 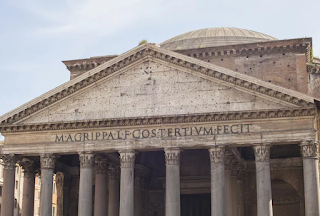 The spherical shape of the building suggests that it may have been dedicated to the planet gods since at the time there were seven known planets.  The Orb symbolised the world and the universe and was also an emblem of the Emperor's power. It has niches for 7 statues and altars around the inside of the temple where sculptures of deities probably stood. The round 'Oculus' gap in the roof also points to a cosmic effect in the structure. It allows in rain and so the marble floor is curved outward to allow drainage. It also permits light to enter and the sunshine throws a beam of light running through the interior like a sundial or upside down observatory. The central oculus is also surrounded by 5 rings of 28 recessed vaults. This may be an image of the heliocentric worldview with the sun as a centre surrounded by the Moon, Venus, Mars, Saturn and Jupiter. Standing below on the Earth the view upwards is that of a planetarium which can predict planetary positions.

The building has a classical structure in three sections made of bricks and concrete: a portico with Egyptian granite and marble columns in Corinthian style and a triangular pediment, the rotunda with a domed ceiling and oculus and a connecting rectangle part. The walls and flooring are of marble. The Pantheon has walls 25 feet thick so that they are able to support the massive weight of the concrete dome. The Roman builders used lighter and lighter stone mixed with the concrete as the dome rose and the upmost part is mostly pumice lightweight stone.  The dome itself is concrete and the brick and concrete walls contain brick 'discharging arches' which support the upper walls and the dome. The arches are added support for the niches inside the walls. The oculus is useful, too, because it means the dome weighs less. 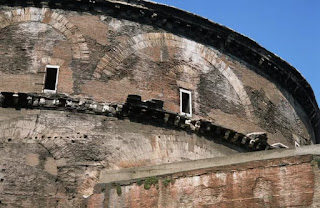 The dome rose through steps which ringed it in smaller and smaller series. Each ring resembled a small Roman wall. At the top there was a compression ring made of 3 horizontal upright rings place one above the other. This effectively distributes compression at the oculus level. 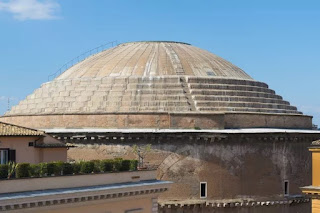 The dome structure has an interior shell butressed by mortar mixed with volcanic ash from Vesusius. This brickwork starts from stone pillars which interlock and work as coffering for the ceiling. On top the architects placed circular layers of horizontally placed concrete. The load was reduced at this point by using clay amphorae and light pumice stone. 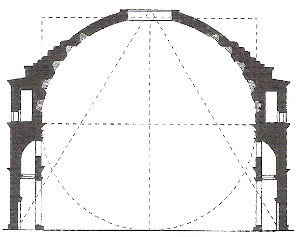 There are several modern buildings modelled on the 2nd. century Pantheon. They include the U.S. Capitol, the Jefferson Memorial, and the National Gallery in Washington, D.C., the library at Columbia University and the dome at MIT. The Manchester Central Library (1937) and the Paris Pantheon (18th. cent) are two more examples.