- Republic by Zeno of Citium

The principal source of information on Zeno of Citium (Cyprus 334 – c. 262 BC) was Diogenes of Laertes, in The Lives and Opinions of Eminent Philosophers, Book VII: The Stoics (3rd.cent AD)

Diogenes reports that Zeno was a phoenician merchant who was transporting purple by sea and was shipwrecked near Piraeus. He made his way into nearby Athens and read Memorabilia by Xenophon, a collection of Socratic dialogues. He then decided to learn more about philosophy.

Zeno studied under the Cynic philosopher Crates of Thebes and so he carried some of Cynic philosophy into his own Stoic model. Both Stoics and Cynics believe that a good life is defined by the state of the soul, rather than the luxury of the surroundings and that material possessions are not important to happiness. They valued discipline and clear judgement.

Zeno's vision was Socratic philosophy turned into dogma: the basis of human happiness was 'living according to oneself', later 'living according to nature'. Virtue is the only good necessary for a human and consists in the knowledge of what is correct, what must be tolerated, or not, and justice. The world is governed by the divine Logos, the reason that maintains order in the world.

After studying for many years in Athens Zeno established his own school and began to teach on the porches (the `stoa') of the arcade in the market place in Athens. From this his school took the name of the place of learning: Stoic. 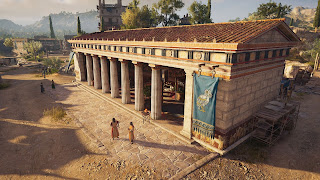 The Stoic school held reason above emotion. They believed that the path to happiness, eudaimonia, was discovered through Logos (Universal Reason) and living in accordance with reason was the purpose of human life. Living following passion and instinct was an animal life. Another Stoic tenet was that nothing is permanent or has lasting value.

Zeno had no time for the abstractions of metaphysics and focused on virtue. Physics and metaphysics were only valued by him in regard to virtue. He replaced metaphysics with common sense which meant materialism in Greek thought. He laid great store on the sensory which he exaggerated to an extreme.

There are some constants in Stoic thought:

- Determinism of the universe and human freedom. Zeno maintained that chance did not exist because Nature is ruled by rigid laws. At the origin only fire existed then air, water and earth emerged.

- A universal cycle. All elements will return to fire in a cosmic bonfire. This will be the end of one cycle and the beginning of the next. Everything that happens has happened and will happen in an eternal cycle.

- Providence. God was the fiery mind of the world for Zeno who describes the divinity as a bodily substance which is the material universe. (There is a zoriastrian tradition of fire as the essence of the universe). God, Mind, Destiny and Zeus, are the same thing. Destiny is a power which moves matter; "Providence" and "Nature" are other names for it.

Zeno taught that suffering came from the desire to retain something or the fear of losing it. He was critical of the Epicurean philosophy as the pursuit of pleasure and as impossible to satisfy. Once this is accepted the Stoic enters a state of enlightened apathy (apatheia) and is freed from the enslavement to passion. Awareness of self and others was the goal and that simplicity brought contentment.

Socrates was the eminent model for the Stoics due to his attitude at his trial, his refusal to flee, his calm faced with death and his belief that the unjust are victims more than judges.

Earlier Stoics followed Heraclitus in his view of the soul as composed of fire. However Plato's ideas on Forms were obviated by the Stoics as was his belief in immortality. Later stoicism, though, accepted Plato's thesis of the immortal soul.

Stoicism would eventually become one of the most influential philosophies in the Greco-Roman world and today is recognisable as similar to the basic beliefs of Buddhism.

While studying under Crates, a Cynic, Zeno wrote Republic, a utopia which differs from Plato's work on the perfect society. In Zenon's ideal state its citizens claim the universe as home and all live according to the natural laws and rationality. All citizens were equal and as all actions were reasonable there was no injustice. Indeed there were no laws because of the lack of crime due to the absence of greed and hatred. Love was the governing principle and nobody wanted more than their needs which were already covered.

Plutarch (46 – after 119 AD), was a Greek philosopher, historian, biographer, essayist, and priest at the Temple of Apollo in Delphi. He became a Roman citizen. He wrote of Zeno's utopia in these terms:

"It is true indeed that the so much admired Republic of Zeno, first author of the Stoic sect, aims singly at this, that neither in cities nor in towns we should live under laws distinct one from another, but that we should look upon all people in general to be our fellow-countryfolk and citizens, observing one manner of living and one kind of order, like a flock feeding together with equal right in one common pasture. This Zeno wrote, fancying to himself, as in a dream, a certain scheme of civil order, and the image of a philosophical commonwealth."

Diogenes of Laertes mentions Zeno's Republic several times in Book VII of his The Lives and Opinions of Eminent Philosophers.(3rd.centuryAD). He quotes Cassius the Sceptic, a critic of the Stoics, as saying that Zeno condemns as useless the system of education. This may be a reference to the sophist training in poetry and rhetoric which Zeno would replace with self-control in a more Spartan approach to education. Cassius also stated that Zeno viewed all those who were not virtuous as enemies, hostile among each other and to their relations. On the other hand the virtuous are the only citizens.

"That he does not think that men ought to coin money either for purposes of traffic, or of travelling."

He also asserts that Zeno wants both sexes to dress alike and cover all parts of their bodies. This may refer to the clothing worn by both Cynics and Stoics: a woollen wrap which left the shoulders bare and with no footwear.

The second century satirist, Lucian of Samosata, describes the Stoic Republic as follows in his dialogue Rival Philosophies:

"Lycinus: I conceive Virtue, then, under the figure of a State whose citizens are happy – as your professor, who is [a Stoic philosopher], phrases it,- absolutely wise, all of them brave, just, and self-controlled, hardly distinguishable, in fact, from Gods. All sorts of things that go on here, such as robbery, assault, unfair gain, you will never find attempted there, I believe; their relations are all peace and unity; and this is quite natural, seeing that none of the things which elsewhere occasion strife and rivalry, and prompt men to plot against their neighbours, so much as come in their way at all. Gold, pleasures, distinctions, they never regard as objects of dispute; they have banished them long ago as undesirable elements. Their life is serene and blissful, in the enjoyment of legality, equality, liberty, and all other good things."

This account of the Zeno's Republic is an utopian ideal which focuses on virtue:

- The citizens are all wise, just, courageous and self-controlled, imitating the ideal sage.

- There is no crime because of harmonious living.

- Private property, money and status are eliminated which removes theft and conflict. Citizens are equal and free.

- All citizens are immigrants to the utopian city. None are natives. (Zeno was an immigrant and died without citizenship of Athens.)

- There is no distinction in superiority, or freemen and slaves. The implications is that slavery is abolished and everyone has citizenship.

Abolishing the distinction between superior and inferior, bond and free, and the admitting slaves seems to imply that slavery is abolished in this state and everyone is granted full citizenship on entry.

Zeno's Republic (beginning of 3rd. century BC) is said to be a response to Plato's Republic (circa 375 BC). A thematic comparison between the two can be a useful guide to Zeno's meaning.

Zeno's utopia is composed of sages who are all wise, just, courageous and self-controlled citizens. All are fellow citizens with equal rights in a conception of Stoic cosmopolitanism. There is an emphasis on a community founded on philosophical principles and constituted for the common good, rather than that of an elite.

In Plato's Republic there are three divisions in society. The only wise citizens are a sanhedrin of philosopher rulers who decide on the regulations for the whole polis. This is clearly an elitist conception of society and indeed the top ruler would be the philosopher king.

Zeno seems to project his utopic state into the future. It is not a roadmap but a vision for a time to come. Plato's polis may be proposed as more achievable and indeed he appears to include himself as one of the philosopher rulers.

Zeno presents his city as one place, a cosmopolitan utopia, indeed a world state. The ideal polis in Plato is one city, the kallipolis, though several states are not excluded.

Plato offers guidelines to achieving his Republic by describing the way rulers should become philosophers in order to build the kallipolis. Zeno, on the other hand, presents his polis as a whole, giving no instructions as to how it is to be accomplished.

Plato's recommends controlling sexual relations in his state. The aim is power: to maintain the high intellrctual level of philosopher rulers. Zeno has no need for strict control in his utopia since all citizens are sages. Men and women, of all races, dress alike, probably in the traditional clothing of a Cynic or Stoic philosopher: a single woollen cloak wrapped around the body. Women are held in common and adultery is apparently not condemned, any laws against it being abolished, so that sexual relationships are not restricted by marriage.

The Stoic ideal excluded places of worship, law courts and gymnasia. Gymnasia were also used by sophists and philosophers for the education of young men. Women were prohibited from entering their grounds. Zeno was critical of the Greek education system so the abolition of gymnasia may be part of his general critique of traditional education in schools. Since the Stoics regarded the flesh as inferior to the spirit the citizen sages probably would have their mind trained on higher things than their physique. The Academy of Plato, which Zeno had attended, and the Lyceum of Aristotle were located in the grounds of gymnasia. So this may also imply the abolition of these. Courts of justice were not needed since there was no crime or civil conflict. Temples were unfit for the gods since they do not dwell in buildings made by humans. Temples are also abolished because of the Stoic belief in pantheism: Zeus is omnipresent throughout the whole of nature.

Plato retained gymnasia and indeed his Academy was on the grounds on one. The kallipolis probably also had temples since only worship of false gods was forbidden. The wise rulers would not need courts of law precisely because of their wisdom.