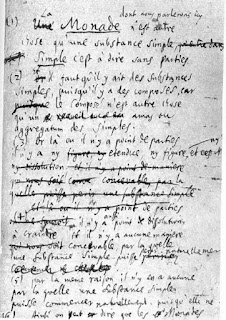 Gottfried Wilhelm Leibniz contributed to the metaphysical debate in his Monadology, originally written in French in 1714, a dualistic idealism programmed by God. The material world would consist of appearances of the real world. (It is similar to Plato's Forms and the modern idea of ​​the energy composite universe.)

In an attempt to explain Descartes' problem of mind-body interaction, Leibnitz denies causation because everything is prefixed by a God or Almighty Being. (This has a parallel in Spinoza's determinism and Lutheran predestination.)

God is also used in his Principles of Nature and Grace founded on Reason to argue that there was an explanation for everything and an answer to all questions. When asked about God, he replied that His existence was necessary and logical. (Hume and others would argue this claim.)

Monadology was composed in a succinct format of 90 paragraphs. It is structured in three basic parts: a description of monads, an explanation of their origin and an analysis of the world using monads and their creation. Monad derives from the Greek ‘μονάς’  meaning unit. The author defines it as an incorporeal, spiritual substance. Monads do not affect each other but work harmoniously together organised by God.

“There is also no way of explaining how a monad could be internally altered or changed by any other created thing, since it is not possible to rearrange anything in it or to conceive in it any internal motion that could be started, directed, increased, or diminished within it, as can occur in compounds, where there is change among the parts. Monads have no windows through which anything could enter them or depart from them. Accidents cannot become detached, or wander about outside of substances, as the sensible species of the Scholastics once did. Thus neither substance nor accident can enter a monad from outside.”

For Leibniz the universe is built of a unique element called 'monad' or 'entelechy' which is a simple, indivisible substance. They have a tripartite hierarchy and the higher include the lower. They are: created monads, souls with perception and memory, rational souls. They incorporate a body leading to a parallel hierarchy: living beings and animals which subdivide into unreasoning beings and rational beings. There are degrees of perfection which depend on cognitive capacities. The criterion for monad dominance is if it contains the reasons for others' behaviours. The dominant monad is the soul.

“From this it is evident that there is a world of created things — living things, animals, entelechies, souls — in the least part of matter.

Each portion of matter may be conceived as a garden full of plants, and as a pond full of fish. But each branch of a plant, each limb of an animal, each drop of its humours, is also such a garden or such a pond.

Thus there is nothing uncultivated, nothing sterile, nothing dead in the universe, no chaos, no confusions, except in appearance. This is somewhat like what is apparent with a pond viewed from a distance, in which we see a confused motion and swarming of the pond’s fish without making out the fish themselves.”

Leibnitz's argument is that there has to be something absolutely simple, otherwise there wouldn’t be anything composite. God is this simple substance uniquely necessary and with no body. The Divinity perceives all monads with total clarity. God creates permanently so monads are generated constantly. They are created perfect and imperfection is due to the limitations of Nature. Monads express themselves according to the will of God.

“Now this interconnection, or this accommodation of all created things to each other and of each to all the rest, means that each simple substance has relations which express all the others, and that consequently it is a perpetual living mirror of the universe.”

Matter is a substance which retains the properties of their smallest parts : "...each portion of matter can be conceived as like a garden full of plants, or like a pond full of fish. But each branch of a plant, each organ of an animal, each drop of its bodily fluids is also a similar garden or a similar pond." The whole is regulated by a pre-determined clockwork harmony.

Space, Time and substance are illusions in Leibniz's thinking and reality is composed of monads. Matter is made up of the perception of the simple monad perceivers. Thus substances are psychic rather than real in Leibniz's panpsychic idealism and do not have spatial reality.

Leibniz believed we lived in the best possible of worlds and supported this claim through monads. He argues that perception among monads tells us that all monads have their essence in one original monad. This, he says, is God who is the simplest of substances and cannot be reduced further. This ultimate monad dominates all others. Since all monads are created by the monad God and imitate the Divinity then there can be no more perfect world than the existing one.

"And one created thing is more perfect than another when what is found in it serves to explain a priori what happens in the other; and this is why we say that it acts upon the other.”

The Monadology attempts to answer two Cartesian problems : the nature of reality and mind/body dualism. Regarding reality Leibniz's solution is that God maintains a deterministic harmony between substances. In the mind/matter problem he argues that within this divine correspondence the body is a perception of the soul.

Leibniz equates the soul to feeling. If a living entity can feel than it has a soul which means that animals have a soul but not simple monads. Humans possess souls and reason which allow them to think of their own existence and that of God. Arguing from reason the author claims that there exists an original monad who transcends and harmonises all others.

Descartes thought that the body was an extension, a corporeal substance which is in motion and has size and shape. Leibniz criticises the idea of extension which means that matter is infinitely divisible and this suggests that there cannot exist a simple unity. It also signifies that it has no source of natural activity.

“Now where there are no parts, neither extension, nor shape, nor divisibility is possible. And these monads are the true atoms of nature and, in a word, the elements of things.”

Leibniz argues that God always acts for the best. From this he concludes that God has chosen this world out of all the other possibilities because it is the best.

“God is an absolutely perfect being”; power and knowledge are perfections, and, insofar as they belong to God, they do not have limits; Whence it follows that God, possessing supreme and infinite wisdom, acts in the most perfect manner, not only metaphysically, but also morally speaking…” Discourse on Metaphysics