- The Cure (al-Shifāʾ) by Avicenna 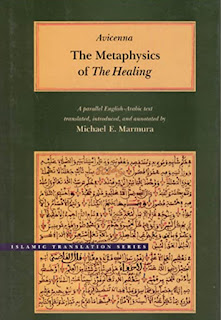 Ibn-Sīnā, Avicenna, (c. 970–1037) was a philosopher and physician of the Islamic world. He synthesised the different contents of philosophical and scientific thinking of Greek late antiquity and early Islam into a rigorous and consistent scientific system. It explained all reality, including the beliefs of revealed religion and its theological discussions. As a compendium of science and philosophy it is the high point of the 6th century Greek tradition and the beginning of Arabic practice in the 9th century.

He influenced Maimonides in his Arabic Guide for the Perplexed which sought to synthesise Jewish theology and Aristotelian philosophy. Translated into Latin in the 12th. century Avicenna's writings influenced Renaissance philosophers and his medical texts were the basis for instruction in Europe until the 17th. century.

Avicenna was educated in Bukara the capital of the Persian Samanid dynasty and later joined the educated elite of the city. The city was located on the highly commercial Silk Road and was known for its sophisticated level of knowledge in the arts and sciences.

In 999 Buhara was overrun by Turks and Avicenna fled the city. He spent the last years of his life in the court of ʿAlāʾ-ad-Dawla in Isfahan and completed The Cure there.

The Book of Cure/Healing is presented in 22 volumes and is based on the Aristotelian philosophical tradition. Its intention is to cure or heal the ignorance of the soul and so is not medical but philosophical.

The main sections are the following:

By the 10th. century Avicenna's system of logic had replaced Aristotle's in the Islamic world. They also influenced medieval western writers after their translation into Latin in the 12th. century.

He drew on the Stoic tradition to formulate his calculus and syllogisms. He also used inductive logic in the Aristotelian tradition which is crucial to the scientific method. His chapters on logic with their inspirations are the following:

In astronomy, the book proposes the theory that Venus is closer to Earth than the Sun.

On geology Avicenna advanced a radical hypothesis on the origin of mountain ranges.
On paleontology he explained how fossils became petrified:

"... the cause of this (phenomenon) is a powerful mineralizing and petrifying virtue which arises in certain stony spots, or emanates suddenly from the earth during earthquake and subsidences, and petrifies whatever comes into contact with it."

The chapters on physics:

On the heavens (Aristotle’s De caelo)

On the soul (Aristotle’s De anima)

Arithmetic (Nicomachus of Gerasa, Diophantus, Euclid, Thābit b. Qurra, and others)

Avicenna follows the Islamic tradition in differentiating between essence and existence. He argued that existence is caused by an agent that adds existence to an essence. The cause must therefore be something existing that coexists with its effect.

Using the priori proof from reason alone Avicenna argued for the existence of God. The reasoning relies on both cosmological and ontological arguments.

His chapters on metaphysics are:

Universal Science: the study of being as being, first philosophy, natural theology (Aristotle’s Metaphysics)

Prophetic legislation as the basis for the three parts of practical philosophy:

- Politics (prescriptions by the prophet legislator for public administration and political ruler to succeed him; [Plato’s and Aristotle’s books on politics])

- Ethics (as legislated by a caliph; [Aristotle’s Nicomachean Ethics])

In Book 8 of The Cure Avicenna considers God's attribute of Necessary Existent. He inherited the neoplatonic model of emanation in which the cosmos has no beginning but is a product of a good divinity who produced an ordered universe.

"God, the supreme being, is neither circumscribed by space, nor touched by time; he cannot be found in a particular direction, and his essence cannot change."

Avicenna proposed philosophical proof for God's existence. He argued that our experience of the world confirms that things exist since we notice their coming into being and their passing. Contingent existence needs to have a cause which can be traced back in logic to an included cause. (A basic tenet of Aristotle's thinking.) Existing things find their cause in a subsistent Necessary. This is the God of religion.

"That whose existence is necessary must necessarily be one essence."

Avicenna's method of logical verification was to examine Aristotle's writings and test the validity of each paragraph. He effected this by analysing the syllogisms they implied. Syllogisms are three liners: (example: "All men are mortal. Socrates is a man. Therefore Socrates is mortal.") Avicenna strove to understand the middle term which explains the relationship between the other two. This leads to certainty.

In Avicenna's logic all universal concepts were thought by the First Principle then by the intellects of descending spheres. Using his analysis Avicenna was able to integrate the acquisition of knowledge by celestial bodies and humans in a single syllogistic model of epistemology.

Celestial intellects are always updated since they belong to eternal bodies. They can understand the intelligible and distinguish it from its cause. Avicenna proposes an empirical theory to explain human knowledge. Humans know through their senses and in order to understand its causes they first need to perceive the intelligible's effects and then reason back syllogistically to the cause. However, if the soul learns to perceive intelligibles through training then after death it will be able to perceive them as the celestial spheres do. This is the state of philosophical happiness. Religion uses the Persian term for it: 'paradise'.

Avicenna details the ways in which the senses operate and how they can help or frustrate the perception of the middle term, the key to certainty. He understands the sensory system as external, the 5 senses, and internal: common sense, imagery of forms, imagination, estimation and memory. Intelligibles are stored in imagery and memory which have a base in the brain

He calls this learning a 'contact' in line with Neoplatonic epistemological language which theorises a divine flow of knowledge affecting both human and celestial intellects, though the former must arrive at certainties through striving to perceive the middle term.

“The active principle (intellect) lets flow upon the soul form after form in accordance with the demand by the soul; and when the soul turns away from it, then the effluence is broken off."

The analysis of the soul as rational allowed Avicenna to systematise his ideas on several aspects of religion: cognitive, social, mystical and social.

He approached the cognitive side by creating a metaphysics of the natural soul, named theological, which he added to he traditional metaphysics of philosophy and natural theology. This is included at the end of the Metaphysics section in The Cure. In Book 9 he describes the destiny of the rational soul in the afterlife of happiness and unhappiness. Happiness is defined as the perfection of the rational soul through knowledge. In Book 10 he outlines the celestial effects on the world: dreams, prayer, prophecy and others.

The social aspect of religion is dealt with in a subdivision to practical philosophy. As the prophet is able to verify knowledge syllogistically he can thus regulate social life and has grounds for leading society.

Avicenna's soul is independent of the body and able to abstract. His thought experiment of 'the flying man' illustrates this vision and foreshadows Cartesian cogito by 600 years. If someone were blind and suspended in the air would that person be able to assert the existence of self? There is an awareness of self but no sensory consciousness of the body. This means that the soul is a self-aware thinking subject and independent of the body.

Avicenna's work made a synthesis of the philosophies he inherited: the hellenic tradition with islamic theological and philosophical thought. His synthetic system aimed at explaining the whole of reality. It was based on the physics and metaphysics of Aristotle and topped with neoplatonic emanantism. His cosmology was drawn from the Ptolemaic model. This converted his research programme into a synthetic worldview.

The foundation of this system was Aristotelian ethics and rationality which guided his objective of knowing through reason in orden to gain happiness which is a unique feature of humans.

“...the activity of the intellect is thought to be distinguished by hard work since it employs theory, and it does not desire to have any other end at all except itself; and it has its proper pleasure... Complete happiness

The core concept of Avicenna's philosophy was the life of the rational soul. Our intellects have the same substance as celestial intellects and it is our moral duty to attain their maximum potential which is to think the intelligibles. Given our physical materiality we have an obstacle to thinking like the First and celestials, so as well as tending to our bodies medically we must prepare our rational soul for the afterlife where we will enjoy continuous intelligibility like the deity. Only those who prepare their intellects in this life will be able to enjoy divine knowledge in the next.

Avicenna's created a synthesis of neoplatonic and aristotelian thought which was taken up by medieval European scholasticism. This served as an excellent source of hellenistic learning for a Europe awakening from the lost tradition of the Dark Ages. The path to this re-encounter with its lost tradition came by way of Sicily, Spain and the Crusades. Avicenna was one of their main reference points.