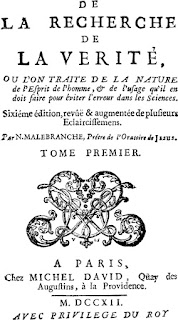 The 17th. century philosophical polemic in southern Europe was between belief (led by ecclesiastics and the scholastic tradition based on Aristotle) and reason initiated by Cartesian doubt. It was the traditional  conflict between two world views : the vertical and the horizontal perspectives. The fundamental debate was epistemological with the focus on how we know. Some responded by involving God in an upward vision and others took on the  level plane based on human reasoning. Malebranche attempted a synthesis between the Augustinian religious tradition and Descartes' rationalism.

Nicolas Malebranche initially followed Descartes and opposed the British empirical school. As a priest, he also wanted to synthesize Cartesian with Augustinian thought to demonstrate the active role of God in the world. Following Descartes, he believed that human knowledge came through immaterial ideas or mental representations. In 1660 he decided to enter the Oratory, founded by an Augustinian theologian, where he immersed himself in the work of Augustine of Hippo. Like him he argued that all ideas only exist in God. These ideas are independent of our finite minds and when we access them we understand objective truth.

Malebranche's philosophy survives in his two volume work De la recherche de la vérité. His innovation was the explanation of how universal divine ideas could also serve as immediate sensory objects in the individual human mind. It suggests that while the conception of ideas is pure and direct, their sensory perception will depend on each individual.

Recherche (1674-75) is a synthesis of the systems of Augustine of Hippo and Descartes. It was followed by Eclaircissements (Clarifications) which present his most well-known doctrines : the vision in God, occasionalism and theodicy.

It is composed of six books divided into two volumes. His concern is to demonstrate tat God has an active role in all aspects of the created world : material, cognitive and moral. The immediate focus of the work is on the main sources of human error and a method for gaining truth. Five books are dedicated to describing the errors based on the senses, imagination, pure understanding, inclination and passion. The third book, on pure understanding, argues that ideas which proceed from objects exist in God. The sixth book criticises the Aristotelian proposition that Nature has secondary causes different from God. It then demonstrates Descartes' method of concentrating on clear ideas through reason.

"I am not my own light unto myself."

Malebranche's synthesis was an attempt to bring together Augustinian theology and the contemporary mechanistic science in a renewed search for a method to determine truth. Knowledge was agreed to be a mediation between material objects and immaterial mental representations which Descartes called ideas. However the origin of theses ideas was a source of disagreement. Malebranche argued that the Christian-Platonic Augustinian interpretation was their source so that they were archetypes in the divine comprehension. Humans access these essences, which are eternal truths, through a process of illumination informing their power of understanding.

"We see things in this material world, wherein our bodies dwell, only because our mind through its attention lives in another world, only because it contemplates the beauties of the archetypal and intelligible world which Reason contains."

The author of the Recherche argues that sensory evidence is erroneous and we must rely on reason to ascertain truths. He bases his argument on a physiological analysis of the eyes comparing them to natural spectacles. The brain receives input through the eyes but it is the animal spirits which agitate the brain fibres to make sense. These are affected by the state of the body as well as prejudices and living conditions. Thus the imagination is a source of difference between the mind and it mental representations. Reason and clear ideas are the only origin of truth, not the senses or the imagination.

Ideas, for Malebranche, have their origin in Descartes' dualism : mind is thought and is not extended to matter. Material objects are measurable in size, shape and mobility but their sensory qualities (colour, temperature, taste, smell...) are mental sensations provoked by these external objects. This sensory information does not offer clear knowledge of reality, however representative ideas provide grounded knowledge of objects and their properties. (Malebranche's distinction between ideas and sensations corresponds to Locke's differentiation between primary and secondary quality ideas. The primary qualities of an object, such as the solidity and occupation of space exist independently of the perceiver. The secondary ones, like the colour, differ according to what he perceives. For example, if we jump in front of a red bus whose primary qualities are solid and take up space, it will cause injury and possibly death. The way the bus appears to us is a controlled hallucination; the bus itself is not.)

Ideas in the author's philosophy are not in the mind but permit us to represent external reality mentally. They exist in God and our finite minds access them through God's will. The proof offered for this explanation is that some ideas are infinite and a finite mind cannot have an infinite modification.

This causal doctrine affirms that everything that exists or happens in the universe is a direct effect of God's will. For example when a billiard ball impacts another it is God who moves the second ball. (Hume later refers to an empirical interpretation of causality using the snooker table. He holds that no matter how clever we are, the only way we can infer if and how the second billiard ball will move is via past experience. Coupled with Malebranche's vision the implication is that we can predict the will of God.)

"All creatures are united to God alone in an immediate union. They depend essentially and directly upon Him. Being all alike equally impotent, they cannot be in reciprocal dependence upon one another."

The Divinity is the cause of every natural event and finite beings are only occasional causes. However Malebranche still believes in the scientific task of discovering the regularities in Nature and describing its laws. His doctrine of occasionalism was not meant to prohibit scientific exploration but to offer a foundation for Cartesian physics. It purports to explain the causal ground for active forces. It is a logical extension of Descartes' vision of God as the ‘universal and primary cause of motion’.

For Malebranche free will is not eliminated by God's causal activity. In fact occasionalism preaches that the Divinity has a hand even in human will. God directs our inclination towards good but we have the power to refuse this determination and decide what is good for us. Sin is committed by willingly directing our attention away from God towards enticing but false choices stimulated by the senses.

"If we did not have freedom, there would be neither future penalties nor rewards, because without freedom there are neither good nor bad actions: So that Religion would be an illusion and a phantom."

Descartes distinguished between the idea of material things and their sensory qualities. He concluded that the mind and the body are two entities. Malebranche follows this Cartesian model and criticises Aristotelian and Augustinian thought which recognised sensible qualities in bodies. The nature of body is material and Recherche insists that it is the clear idea of matter which comes from the Divinity that reveals the nature of the body. The idea exists in God while sensations are only modifications of the mind. However, contrary to Descartes who believed that the mind is better known than the body, Malebranche is of the opinion that the nature of the body is better known than the nature of the mind.

"He has willed - He wills incessantly - that the modifications of the mind and those of the body shall be reciprocal. This is the conjunction and the natural dependence of the two parts of which we are constituted."

Malebranche's ideas had an influence on Berkeley's pure idealism because they made the last step toward denying the existence of material substance. Leibniz was also inspired by his correspondence with Malebranche to design the pre-established theory of harmony as an alternative to that of Malebranche himself. Hume agreed with Malebranche that there can be no causal relationship between different entities, but he tried to explain it based on human experience instead of looking to God.