- Critique of Pure Reason by Kant 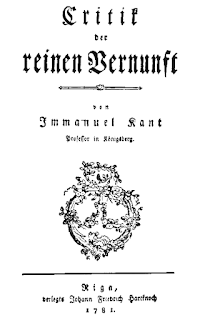 During the Enlightenment in 18th century Northern Europe physics proposed a deterministic reality as the approach to understanding nature, replacing Revelation. The traditional confrontation of thought  continued between the human and the divine, physics and metaphysics.

An empirical vision predominated in the British Isles and philosophers faced a culture of scientific materialistic perception of the world. In an extreme form of empiricism Berkeley argued that we cannot directly know anything outside our minds. Hume also adopted a more limited empirical approach saying that the brain constructs sense from an otherwise chaotic reality. Adam Smith's economic theory proposed a free market, which although it appeared chaotic was guided by an invisible hand. In Germany Emmanuel Kant proposed a vision, in the Homeric tradition of immanence, arguing that knowledge resulted from a synthesis of experience and concepts. He also placed limitations on human knowability stating that we could know appearances (phenomenon) but not the thing in itself (noumenon). Kant worked towards a synthesis of rationalism and empiricism arguing that knowledge resulted from a combination of experience and concepts. He distinguished between rational truths, explainable by words, and factual truths that need further explanation. He also proposed a priori concepts, rational deductions, and a posteriori knowledge that result from experience. Starting from the notion that it is not possible to know objects themselves, he theorized in an innovative way that the mind is creative in its representation of reality because it is stimulated by objects and is not subject to knowing them in themselves.

Kant published his book Critique of Pure Reason  in 1781. It is a theoretical work on the limitations of metaphysics and the understanding of experience in the same line as Berkeley and Hume who dealt with the question of how we know. Kant proposes that the way we think is what determines what we know. The mind manages reality through cause and effect and everything outside this logic is incomprehensible. In effect we do not simply absorb input from experience but actually organise it so that experience is controlled by the mind, not the opposite.

Kant's basis is causality. We experience the existence of the universe through our sensory systems and we theorise that it came into being through a chain of events. This causality principle explains existence.

The author distinguishes our thinking categories between a priori and a posteriori assumptions. A priori knowledge is that which we accept with or without experience, for example mathematical rules or the world. A posteriori affirmations can only be proven through evidence or through direct experience. The empiricists agreed with the second category and rejected the first one.

For Kant philosophy is a priori so in the Critique he focuses on that. He argues that despite not experiencing everything we can have knowledge and judge things by shaping input data to our experiences. We know that we can know and learn. Knowledge of the world comes from our shaping of our own experiences and from a collective fund of knowledge. This means that knowing reality is another way of saying that we create it.

Reasoning for Kant is 'understanding' and that allows us to form ideas about the information we receive about the world. Imagination helps us to put the ideas together. We know a chair is a chair because our imagination composes ideas made by our mind through its experience of chairs.

However, some things are simply unknowable yet it does not mean they do not exist. That is where Kant stands out from his contemporaries.

“Ours is an age of criticism, to which everything must be subjected. The sacredness of religion, and the authority of legislation, are by many regarded as grounds for exemption from the examination by this tribunal, But, if they are exempted, and cannot lay claim to sincere respect, which reason accords only to that which has stood the test of a free and public examination.”

Kant's approach to philosophy is not speculative but rather a criticism of how we think in order to ascertain what we can know, understand how we know and define the limitations of our knowledge.  He argues that the answers to philosophical problems lie not in metaphysical cogitations but in an examination of our mental abilities. One conclusion he came to was that the mind, far from passively receiving external data actively formulates our vision of reality through dynamic perception. Another is the emphasis on how we can know reality more that what we can know about it.

“Space and time are the framework within which the mind is constrained to construct its experience of reality.”

When forming our experiences mentally Kant distinguishes between phenomena and noumena knowledge. Noumena are 'things in themselves' which exist independently of our minds. We can never be certain of these realities and so we will never know what these external realities are.  Phenomena are realities created by our mental faculties while making sense of the world. This is the filtered data of which we know since it is what the mind presents us with. The author argues that noumena are unknowable and that all human knowledge is phenomena.

The philosophical claim that the world consists basically of mental ideas and not physical objects is named idealism. Unlike Berkeley Kant does not deny external reality but he establishes the limitations of human knowledge on the information offered by the mind and this cannot be transcended. We will only know reality which is provided by phenomena. (Thus the name: transcendental idealism.)

“The schematicism by which our understanding deals with the phenomenal world ... is a skill so deeply hidden in the human soul that we shall hardly guess the secret trick that Nature here employs.”

Hume posed the problem of how to infer generalisations from particular experiences in the sense that we have specific sensory experiences of tastes, smells etc..., but we cannot directly experience a physical law or a cause and effect. If we cannot see or hear causation through the senses how can we infer that one event causes another? Kant's expression of this question is to ask how synthetic a priori knowledge is possible. His answer that synthetic a priori knowledge is made possible through the ability of our mental faculties to organise experience into categories which then become general features of our experience. In short we cannot NOT find causation in Nature. This is the way our minds work - we perceive cause and effect everywhere. As such synthetic a priori is how we achieve essential knowledge of reality.

“Our knowledge springs from two fundamental sources of the mind; the first is the capacity of receiving representations (receptivity for impressions), the second is the power of knowing an object through these representations."

"All our knowledge begins with the senses, proceeds then to the understanding, and ends with reason. There is nothing higher than reason."

Kant distinguished between a moral an immoral act on the basis of the protagonist's motivation. Our actions can be judged as morally correct because we are able to think about and offer reasons for them. As reason is responsible for the approval or censorship for our behaviour only our actions and their motivation are liable to moral judgement.

As Kant argues that reason is the only moral reference and so good and bad should be decided by reason. Bad actions mean behaving against the tenets of our reason or advocating precepts which you reasonably would not wish as universal laws.

"There is, therefore, only one categorical imperative. It is: Act only according to that maxim by which you can at the same time will that it should become a universal law.”

Immorality then is a sort of irrationality. He adds that reason is what makes us human so that irrational behaviour dishonours our humanity. It is only by acting according to reason that we demonstrate that we are autonomous beings in control of our passions which lead us into immoral behaviours.

Kant also believed that human reason permits us to choose between biological impulses and other ways of behaving. The animal kingdom does not have reflective reasoning and so cannot choose to override their natural necessities but reason allows humans to exercise free will and select behaviours which cancel their biological appetites and are morally correct.

Critique of Rationalism and Empiricism

Kant aimed to extend knowledge through metaphysics yet not disregard physics. He avoided the Rationalist/Empiricist debate between the use of a priori or a posteriori concepts in seeking knowledge by adopting the synthetic a priori model. He agreed with the Rationalists that the mind classified knowledge and he also incorporated sensory experience. However he rejected the Rationalist concept of a priori knowledge as redundant, for example the proposition 'red is a colour', since it tells us nothing new. On the other hand he did not accept the Empiricists' synthetic a posteriori model, either, since he thought the senses could be deceived. He could not approve of counting solely on empirical evidence which could not be tested through a priori logic. The author's synthetic a priori proposition was both logically verifiable and also extended knowledge.