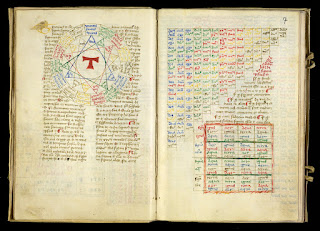 Ramón Llull (1235?-1316), a contemporary of Dante, was a Catalan from Majorca. The island at the time was a cultural mix of Christians, Jews and Arabs.

Llull's early life was carefree but he suffered a series of mystic grises and finally became a tertiary Franciscan. He decided that his mission was to convert the infidels and set about creating a system for the perfect conversion language. It was based on mathematics and consisted of a system of universal ideas supposedly held by all peoples. The concept of universal concordance was a recurring theme among the Franciscans.

Like his Renaissance contemporaries in Florence, Llull wrote his books in the vernacular so as to reach those who could not read Latin or Arabic:

(“so that one can demonstrate logic and philosophy to those who cannot understand Latin or Arabic.")

The Crusades were nearing their end with the fall of Acre in 1291. Llull, who arrived in Rome in 1290, took advantage of the ongoing fight against the Muslim faith to demonstrate that his mission and his Ars were relevant.

Llull's philosophy is different from scholasticism and Aristotelianism. He based his thinking on philosophers such as Augustine of Hippo, Dionysius the Areopagite, Anselm, and Bonaventure. The main feature of his reasoning is its synthesis. It proposes that philosophy, theology and mysticism are not contradictory sources of truth but aspects of the same process of knowledge. He aimed at converting infidels to the true faith and unifying Christians in one dogmatic system.

With this goal in mind Llull attempted to create a universal model of reality which would permit humanity to know God and recognise creation as the work of the Divinity. The dual purposes of Ars were to convert infidels through reason and to offer Christians the principles of their faith.

Llull was familiar with the Islamic intellectual tradition. His first work (1271-2) was a compendium of Al-Ghazali's logic. The Art's combinatorial mechanics resemble zairja, a device used by medieval Arab astrologers. The Art's references to divine attributes is also similar to the contemplation of the ninety-nine Names of God in the Muslim tradition.

The Ars Magna is divided into two phases: the Quaternary and the Ternary: the Quaternary gets its name from its organisation around four elements. It is made up of two main texts: Ars compendiosa (1274) and Ars demonstrativa (1283) plus some commentaries.
The Ternary is called after its Trinity structure:Ars inventiva veritas (1290); Tabula generalis (1293-4); Ars generalis ultima (1305- 8) including Ars brevis (1308).
Llull created The Ars as an instrument for missionary work in intercultural dialogue. It was not designed using Christian dogma as a reference but on principles common to the three religions: Judaism, Islam and Christianity.
The book includes Llull's criticism of Scholastic logic:
- syllogisms are insufficient to reveal new truths since they consign dialectics to opnion and not argument.
- syllogisms conceive objects as intentions within a proposition, not as realities.
The Ars offered a system of logic different to scholasticism by using logical and metaphysical relationships to discover new truths. It is structured to answer questions which appear in the final sections by using a combination of elements: terms, alphabet and figures:
- The terms are the fundamental ideas of the Ars like the Dignities (Goodness, Beauty, Greatness, Eternity) and the Principles (Difference, Concordance, Contrariety, etc.).
- The alphabet is formed of nine letters from B to K in representation of nine Principles with nine types of Questions, nine Subjects and nine Virtues and Vices. These are combinatorial and are represented on the Tabula Generalis: 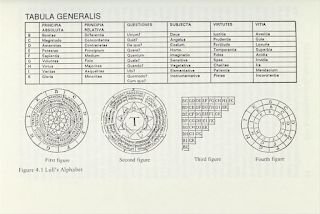 - The figures are visual graphs of the combinations:

In the First Figure of the Ars the combination of the nine principles with the letters to form 72 propositions of the style 'Goodness is great' or read in the opposite direction 'Greatness is glorious': 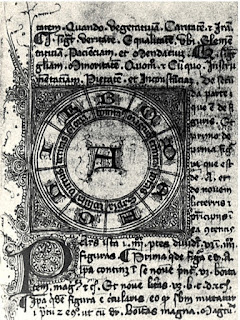 There follows a Second Figure with no reference to combinatorics.

The Third Figure deals with all combinations between letters. The reversal is not included but the total would give 72 pairs. The system permits questions such as “if goodness were great” or “what is great goodness?” This Figure allows 432 propositons and 864 questions: 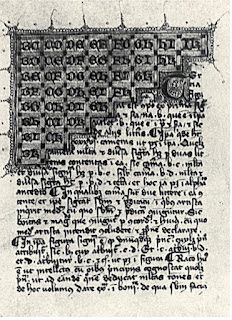 The Fourth Figure is mobile. There are 3 concentric circles, one on top of the other, and held at the centre by a rope. In groups of 3 nine elements permit combinations in threes yielding 84 possibilities. 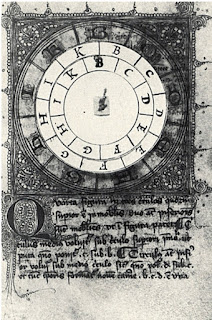 However, here appears the first limitation of the Ars. Many possible combinations are falsified by experience. This combinatorics would allow the question "if the world were eternal?" and the reply that that would imply eternal goodness and so no evil in the world. However, experience teaches that evil does exist. This contradicts the combinatory result and demonstrates that the world is not eternal.

The combinations do not generate new questions but serve as proofs of tested arguments. The Ars is less a mathematical tool than an instrumento of dialectics arguing for preconceived theses. This fits with Lllull's initial intention to offer reason-based dogma to Christians and as a tool to convert infidels.

It was Leibnitz in his Dissertato de arte combinatoria in the 17th. century who ended discussion on Llull's combinations by rejecting calculations based on symbolic forms, not on content.

However Llull insisted that the principles of faith and an ordered cosmology were to be prized above logical combinatorics. As he states in Logica Algazelis:

Llull believed in the existence of God as the root of all existence. He also held that humans were unable to understand the Divinity due to their limited nature. The author solves this problem by recognising Nature as the reflection of God's qualities so we can know the divine by studying its attributes. He named these the 'Dignities' and affirmed that their perfection was attained in God.

There are Dignities common to the Christian tradition: infinitas, aeternitas, unitas, sapientia Others correspond to normal human attributes: magnitudo, virtus, misericordia or simplicitas. Projecting these onto the Divinity is Llull's way of perceiving God's work.

The first principle is defined in Ars brevis as:

"Goodness is that whereby good does good."

The principles are axiomatic and based on the Dignities. They are defined as principles of existence and action. In reference to existence they allude to the Dignities. As regards action they apply to the particular forms of knowledge like law, navigation and astrology. They can be absolute on their own or relative when referring to a single subject. Llull views this ascending and descending as a ladder linking inductive and deductive thinking on the subject. (Heraclitus in presocratic times had already pronounced a similar idea: 'The way up and the way down are one and the same.' )

Creation is representative for Llull since it is a mirror that reflects divine perfection. A common notion in Christian, Jewish, and Arab cultures is the ladder of beings. This is an ascending/descending structure which organises creation according to a purpose. The ladder is divided into degrees:

1. Elementative, corresponding to the four elements;

3 Sensitive, those who have sensory perception;

4 Imaginative, beings who are capable of internally reproducing what they have perceived;

5 Humans as rational beings, and at the same time, participants of both the spiritual and the material;

7 Angels, pure spirits without a body;

8 God, the highest step of the ladder.

All beings depend for their meaning on the Divinity, except God for whom creation is an expression. The ladder of knowledge allows ascent and descent through sensory data to the comprehension of spiritual realities and vice versa.

According to the model of correlatives the nature of a being is based on its activity, its passion and its connection. These are correlative virtues which Llull distinguishes through suffixes: active -tivus (e.g., bonificativus), passive, -bilis (bonificabilis), for the connective, -are (bonificare). The correlatives are reproduced throughout the ladder from the inanimate to the Divinity. God is defined in intrinsic nature through the Trinity and through their extrinsic action of the Dignities they will produce creation.

("Man is a manifying animal.")

Humanisation occurs through the three principal activities of the soul, according to Llull: knowing, remembering and loving which have a correspondence with the superior faculties of the soul: memory, understanding and will.

The soul attains knowledge of the world through ascent and descent. Ascension begins with physical objects captured by the senses and transformed by the imagination. It is only then that the intellectual facilties of the soul change them into knowledge of external things. Descent moves from the general to the particular by taking the Principles as the initial points through which the soul can recognise them in humans.