- The Theogony by Hesiod 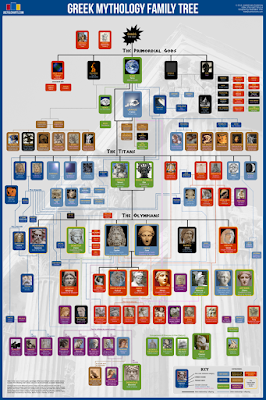 Overview
Homer and Hesiod's narratives represent a renaissance of Greek culture in the 8th century BC after the Dark Ages, lasting from 1100 to 900 B.C. Their tales from Greek mythology were a revival of Greek cultural traditions and self-identity. A similar phenomenon occurred in the Hebrew tradition among the Jewish tribes held in slavery in Babylonia. Their historical identity was being erased by the powerful empire which held them so the decision was made to write down their oral traditions in the Bible as a reaffirmation of their identity. From these small beginnings grew a strengthened self-confidence which led on the one hand to Alexander's empire and the later spread of Greco-Roman culture and on the other to Christianity, the two foundation stones of Western civilisation. Both traditions also played a part in the renewal of western thought after the European Dark Ages one in Renaissance Italy which harked back to the Roman empire and the other in the reconquest of Muslim Spain by Christians and the consequent discovery voyages which financed the beginnings of affluence in Europe's history.
The Greek myths remains pertinent today since they also offer an insight into the human condition. They were probably passed down orally from the Minoan and Mycenaean generations of the 18th. century BC. This meant that there may have been constant additions as the myth was told and retold. It is difficult to imagine that they were left intact and not mixed with local stories and changed by local cultures. Hesiod left us his Theogony a narration on the evolution of the Greek gods. It tells, (like the cosmologies of the neighbouring Middle East) that in the beginning there was only Chaos, a big hole. The first gods were powers more than anthropomorphic beings, but the genealogy links the generations to explain the entire panoply of the Greek sky. The cosmogonic structure of Hesiod’s Theogony is similar to NearEastern counterparts such as the Babylonian Enuma Elis and the poems of the Hurro-Hittite Kumarbi Cycle. Western philosophy tends to start with the ancient Greeks yet there is a growing body of scholarship revealing that the Greeks themselves owed many of their ideas to contemporary or previous Middle Eastern cultures, particularly Babylonia and Persia.
Historical context
When the  empires came to an end, between 1200 and 1150 B.C., the Dark Age of Greece began. It saw the Dorian invasion in the Peloponnese and the Ionic invasion off the coast of Asia Minor. The population was dispersed, fleeing from its palatial civilization to colonize small coastal towns on the Anatolian mainland and adjoining islands in the Aegean sea. It was there that around the 8th century BC Homer and Hesiod's poems were written down. Homer's Iliad relates the end of the Trojan war, perhaps based on the tales of conflict between the Greeks and their neighbours to the east during the late Bronze Age (1800 - 1200 BC). Homer's Odyssey narrates the long voyage home of Odysseus after the Trojan War. The Theogony by Hesiod recounts the genealogy of the gods and he describes the creation of man in Works and Days.

From the 8th century BC onwards myths were also used to decorate pottery  and so the stories spread to a bigger audience through trade. Sculptures adorning major public buildings like the Parthenon, the Temple of Zeus at Olympia and the temple of Apollo at Delphi also celebrated mythical scenes.

In the 5th. century BC myths took on a new format in theatre, particularly in the plays of Aeschylus, Sophocles and Euripides. At the same time Herodotus and Thucydides documented a less subjective historical viewpoint.

In a parallel movement from the 6th. century BC the pre-socratic philosophers spread scepticism about the traditional myths and promoted a more objective explanation for natural events. However, they retained the basic dialectic code which guides the Theogony.

In his Theogony, written around 700 BC, Hesiod sets out to describe the origin of the Cosmos and the genealogy of the gods. He binds together both Nature and the Divinities who are not transcendent beings but forces of nature with human characteristics, except for their immortality.

Heroic mortals too are binary since they have one divine parent and a mortal one thus linking them with both the human and divine worlds. Hesiod's quest was to find a beginning, the ultimate reality which caused everything and he found it in the dialectic nature of the gods.

The gods were divided into three main categories : The Protogenoi, The Titans and The Olympians.

Chaos was at the origin of the universe and the first thing to exist. It was a void from which everything was created. It was a state or a place that existed in the primordial emptiness similar to that redacted by the Hebrew Priestly tradition around 500 BC : 'In the beginning God created the heavens and the earth. Now the earth was formless and empty, darkness was over the surface of the deep...' (Genesis 1/1 -2).

In the Greek tradition according to Hesiod's Theogony (6th cent BC) the creative process follows a dialectic path where Chaos created Gaea (mother earth and life) and her opposite Tartarus (the land of death and torture).  The next births were the couple Erebus (darkness) and Nyx (night), and the union of darkness and night gave birth to their contraries Aether (Light) and Hemera (Day).  Gaea gave birth to her opposite, the male God Uranus, the Starry Sky, and together they produced twelve mutated monsters, and twelve perfect Titans – biological opposites.

Ouranos coupled with Gaia to create three types of children >

- The 3 Cyclops who were one-eyed giants > Brontes, Steropes and Arges

- 3 Hecatonchires > Kottos, Briareos and Gyges who were giants with a hundred hands. However these offspring digusted Ouranos and he pushed them back into Gaia's womb so she asked the Titans to punish their father. Kronos castrated Ouranos with a sickle and his blood fell to the earth producing the Furies (vengeful goddesses), the Giants and the Meliai (tree nymphs). Kronos then and threw his father's testicles into the sea which foamed and gave birth to Aphrodite (goddess of love).

After Ouranos’s castration, Gaia married Pontus and they went on to produce a line of sea deities, nymphs and monsters, including Nereus (the Old Man of the Sea, also known as Proteus and Phorcys in his other aspects, from whom were descended the Nereids, the fifty nymphs of the sea, the best-known being Thetis), Thaumas (who later married the Oceanid Electra, and bore Iris, or Rainbow, and the two winged spirits, Aello and Ocypetes, known as the Harpies), Eurybia and Cetus (a hideous sea monster).

The sea monster Cetus and her sibling Nereus had children including the Graiae (the three grey witches with one eye and one tooth shared among them), the three Gorgons (the most famous is Medusa, mother of Pegasus) and a family series of monsters such as the Chimera, the Hydra, the Sphinx and Cerberus.

The Titans intermarried and had children such as the nymphs  Electra, Calypso and Styx, Helios (the sun), Selene (the moon) and Eos (dawn), Zephyros, Boreas, Notos and Eurus (the wind gods), Nike (victory), Atlas and Prometheus.

Kronos became the Titan leader and married his sister Rhea but, afraid of being overthrown by one of his children as the prophecy foretold, he swallowed each one at birth. However, helped by Gaia and Ouranos, Rhea saved baby Zeus (god of the sky and thunder, and later king of the gods) by wrapping a stone in swaddling clothes and giving it to Kronos who swallowed it. Rhea then brought up the child. Then she tricked her husband into vomiting up the others who were Hestia (goddess of the hearth), Demeter (goddess of the earth and fertility), Hera (goddess of women and marriage), Hades (god of the Underworld), Poseidon (god of the sea)  These were to be the Olympian gods.

The offspring of Rhea and Kronos chose Mount Olympus as their home and hence their name. Together with the Cyclops, Prometheus and Epimetheus the Olympians waged a 10-year war on the Titans to gain control of the Cosmos. The Titans were defeated and thrown down into the hell of Tartarus. It was now the task of Zeus to bring order to the chaotic rivalries of the previous generations of gods. 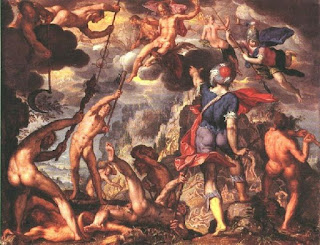 Prometheus had helped the Olympians and so was not sent to Tartarus but he stole fire which he gave to the  mortals and this earned him the eternal punishment of being chained to a cliff and having his renewed liver eaten out every night by an eagle. Following Prometheus' theft of fire Zeus asked Athena and Hephaistos (the lame blacksmith) to create Pandora who opened a jar (later called a 'box' by Erasmus) which released all the evils of humanity except Hope.

Zeus first married Oceanid Metis but then swallowed her to prevent her having children who might become greater than him according to the prophecy. But Metis had already begun to nurture her child Athena who birthed through Zeus' forehead.

Zeus then took another wife, the Titan Themis, who gave birth to the three Horae (the Hours who contolled order in life), Eunomia (Order), Eirene (Peace), Dike (Justice), Tyche (Prosperity) and the three Fates > Klotho (the Spinner), Lachesis (the Alotter) and Atropos (the Unturned).

His fourth wife was his sister Demeter who gave birth to Persephone who married Hades and bore Melinoe (the goddess of Ghosts), Zagreus (the god of Orphic mysteries) and Macaria (goddess of the afterlife).

Titan Leto, a second generation Titan, was Zeus' sixth wife and she gave birth to Apollo (god of music, poetry and oracles) born on Delos, the floating island because Hera had prohibited Leto from having children on earth, and also Artemis (goddess of hunting, childbirth and fertility).

Zeus' last wife was Hera, his sister, and they had children > Hebe (the gods' cupbearer), Ares (god of War), Enya (goddess of War), Hephaistos (the lame blacksmith and craftsman) and Eileithyia (goddess of childbirth and midwifery).

Zeus also had many extramarital affairs with mortals like Semele, mother of Dionysus or Bacchus (god of wine and ecstasy), Danae, mother of Perseus, Leda, mother of Helen of Troy, Clytemnestra and the twins Castor and Pollux, and finally Alkmene, mother of Hercules.

Poseidon, Zeus' brother, was betrothed to Nereid Amphitrite and they had Triton (messenger of the deep). Theseus, son of Aethra, was jointly conceived by Poseidon and Aegeus.

Zeus gave Aphrodite in marriage to his son, Hephaistos who was lame and ugly. in order to circumvent rivalry and jealousy over her beauty. However, she had an affair with Ares and conceived Eros (love), Phobos (fear), Deimos (cowardice) and Harmonia (harmony). Harmonia married Cadmus, founder of Thebes, and their children were > Ino, Semele, Agaue, Poldorus and Autonoe.

Homer (900 B.C.)
The Iliad
The Odyssey
Hesiod (700 B.C.)
Email ThisBlogThis!Share to TwitterShare to FacebookShare to Pinterest