In 480 B.C. the Persian king Darius was defeated at Marathon by the Greeks. Darius' son Xerxes decided to take revenge by attacking the Greeks 10 years later. The Persians opted to make a stand at a mountain pass. This poor strategy restricted the movements of their huge army used to battling on wide, level plains. Spartan troops entered the battle and defeated the invading army at  Thermopylae while the Athenian fleet defended the sea.

Having defeated their biggest enemy, Athens entered a golden age (480 - 404 BC). Democracy emerged as the political practice.  Drama, philosophy, literature, art and architecture flourished. Athens had been captured by Xerxes during the Persian war and the temples on the Acropolis had been destroyed by fire. Pericles devoted himself to their reconstruction. The total maximum population of Athens around 430 BC can be estimated at around 230,000 and the rest of Attica probably had less people. Hiwever, the city's economic influence stretched from the Mediterranean to the Black Sea making it very wealthy. This paid for huge public buildings masterminded by Pericles which included the Parthenon.

The Parthenon temple was constructed on the Athens Acropolis between 447 and 438 B.C. The architects were Iktinus and Kallicrates and the administrator was the sculptor Phidias who also carved the huge gold and ivory statue of the goddess Athena Parthenos (Athena the Virgin) which stood within the building. 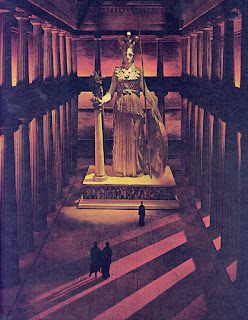 The temple is regarded as a monument to democracy, the political system inaugurated in Athens, and to the victories in the Greco-Persian wars (492-499 B.C.). The religious purpose of the building is disputed since there is no 5th cent. altar but it is agreed that it acted  as a treasury.

The Parthenon is the high point of Doric architecture but it also includes Ionic elements such as the interior frieze. Several smart architectural refinements were employed in order to correct for distortions  in human vision. One example of this is the  slightly convex upward curve of the columns as their diameter lessens towards the top. Another is how the four corner columns  were  thickened so that they did not look thinner against the sky. The Parthenon was not built according to the golden ratio but it did incorporate another harmonic proportion so dear to Greek culture. The building is 30.8 meters wide and 69.51 long. This is a 4:9 ratio which is also found in the front columns and in the height-to-width proportions of the facade. This means that the apparent visual perfection of the Parthenon is an intelligent optical illusion.

Building the Parthenon presented several technical difficulties since the builders had to cut, transport and elevate large marble blocks from Mount Penteli to the Acropolis, a distance of 17 kilometres.

Thousands of craftsmen built the temple. Goldsmiths, coppersmiths, sculptors, carpenters, rope makers and ox owners worked on the construction site. It is said that among the workers was the philosopher Socrates, a stonemason.

At least 20 thousand tons of Pentelian marble were used for the construction of the Parthenon. In order to transport the marbles, the ancient craftsmen built "Lithagogias Street". The road started from the quarry in the cave of Davelis in Penteli and ended at the south side of the Acropolis. The journey took about 6 hours. It is estimated that there were about 20 carriages that covered the route ten times a day.

When the marbles arrived, the workers had to lift them on to the Acropolis. They built makeshift cranes with huge pulleys to which slides were attached on either side to serve as counterweights. In addition to this method, craftsmen also made wooden cranes. Archeologists estimate that 8 large cranes and other smaller ones worked around the Parthenon, mainly inside the temple under construction. They were so well made that they could lift a ten-ton marble slab to a height of 15 metres in twenty minutes.

Although completed in 438 B.C., work on the exterior of the Parthenon continued until 432. Marble sculptures decorated the building with scenes from Athenian mythology and cult. The Ionic frieze of low relief  carvings ran all around inside the colonades. The high relief Doric  metopes topped the columns on the outside of the building. The pediment sculptures filled the gables at each end.

- The freize is a depiction of an annual procession celebrating Athena's birthday. It occupies a continuous external band around the top of the building. The procession begins in the southwest corner then moves west and up the north side. On the south band the cavalcade runs parallel to the north side. They converge at the east to perform a ritual. Both bands show ranks of cavalry preceeded by chariots. Several charioteers are practising the approbates' competition jumping on and off their moving chariots. Further along both bands there are also groups of men carrying different festival objects.

The East side shows a representation of the continuation of the procession and its end. There appear groups of women, heroes of the Attic tribes and gods. Centred over the front porch there is an arrangement including an elderly man, probably a magistrate, a priestess and two girls. The frieze is innovative in that it represents historical scenes as well as references to mythology.

The naturalism portrayed in the freize with its character groupings and the sensation of movement was how the sculptors of the Greek classical age introduced expresivity. It is, however, an idealised expression which displays archetypes, not realistic individuals, though each one looks different and is dressed differently. The classic reliefs are more naturalistic in Phidias' freize sculptures through his technique of wet drapery that allowed the clothing to have a more fluid and flowing look. This "flow" helped to show movement and shape beneath the clothes on the sculptures. This innovation was characteristic of Phidias'  craftsmanship and became an established technique in later Greco-Roman artwork

- The metopes, which are insertions in the  outer Doric frieze, depict ninety-two scenes of mythical battle. Each side of the building had its own subject: 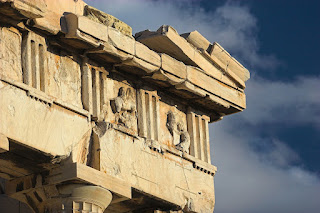 On the West the items show the Greeks versus Orientals, possibly the Persians or Amazons, a mythical tribe of warrior women.

On the North the scenes are of the Greeks  versus the Trojans. There are several gods and goddesses acting as witnesses to the procession. The apparent end of the narrative scenes is Menelaos chasing Helen who is seeking sanctuary.

The East band metopes themes are Gods versus Giants. The scenes progress towards the centre but without a narrative relationship.

On the South side the topic is Centaurs versus Lapiths (a legendary people of Thessaly). The story of the Centauromachy is that of the disruption of a wedding. The Lapiths made the mistake of giving the Centaurs wine at the marriage feast of their king, Peirithoos. The Centaurs attempted to rape the women and their leader Eurytion tried to carry off the bride. A general battle ensued, with the Lapiths finally victorious.

- The pediment sculptures are the two sets of fifty statues in marble initially located on the east and west facades of the Parthenon.

The East pediment, which was above the temple entrance, told the story of the birth of Athena. The sculptural arrangement showed the moment of Athena’s birth from the head of her father Zeus. Only some sculpted figures of the main group survive today.

The West pediment illustrated the contest between Athena and Poseidon during their contest for the honor of becoming Athens’ patron. The binary distinction between gods and humans is blurred in the interaction between idealism and naturalism represented on the sculptures. This is a first step to expressing in architectural terms the the cultural shift towards a more horizontal worldview later evident in the presocratics.