- The Odyssey by Homer 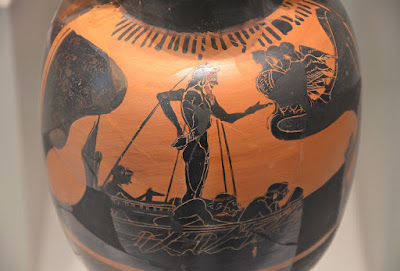 "Tell me, Muse, of the man of many ways,
who was driven far journeys,

after he had sacked Troy’s secret citadel.
Many were they whose cities he saw, whose minds he learned of, many the pains he suffered on his spirit on the wide sea, struggling for his own life
and the homecoming of his companions. Even so he could not save his companions, hard though he strove to; they were destroyed by their own wild recklessness, fools,

who devoured the oxen of Helios, the Sun God, and he took away the day of their homecoming. From some point here, goddess, daughter of Zeus,

speak, and begin our story."

The Dark Ages of Greece began in 1100 and lasted to 900 B.C. The population was dispersed, fleeing from its palatial Mycenaean civilization to colonize small coastal towns. The growth of these micro-states eventually laid the foundation for rivalry, individualism, and the sense of independence that distinguished the Greek outlook compared to its neighbours in Asia.
Three literary works of the time tell us about two different aspects of this culture:
- Hesiod's Theogony, a transcendental view of humanity as dependent on the gods.
- Homer's epic The Illiad, a synthetic vision of the relationships between the divine and the human incarnated in Achilles with a clear tendency towards a vertical interpretation where the immortal gods manipulate humanity.
- His contrasting horizontal vision is seen in the self-made man epic, The Odyssey.
The Odyssey begins with the word "ἄνδρα" (man) in the original text. It is a story about the human condition. Homer narrates Ulysses' journey home from Troy, avoiding all obstacles along the way by his own wits. He is the independent man, not mentored by the gods, the paradigmatic hero as an example for the Greek renaissance to follow.
The Plot
Troy fell ten years ago and Ulysses, the Greek hero, is still returning to his home in Ithaca. His wife, Penelope, is patiently waiting for him in the kingdom but she is surrounded by a mob of suitors who have taken over his palace and lands. Their son, Telemachus, would like to throw the suitors out but lacks the experience and self-confidence to do so. Besides there is a conspiracy afoot to assassinate the prince and take over the kingdom.

Meanwhile Ulysses has been captured and imprisoned by the nymph Calypso who has fallen in love with him. The Olympian gods debate the plight of Ulysses and Athena decides to help Telemachus. She adopts the disguise of Laertes, the prince's grandfather, and suggests that he call an assembly to reproach the suitors. She also puts him in touch with his father's war comrades the kings Nestor and Menelaus in Pylos and Sparta. There Telemachus learns that of his father's plight on Calypso's island prison. Then Telemachus sets sail for home where Antinous and others are planning to kill him on arrival.

Zeus decides to send Hermes to rescue Ulysses and he persuades Calypso to allow him to build a ship and set sail. Poseidon, the sea god, has other ideas. To take revenge on Ulysses for blinding his son the Cyclops earlier in his travels the god stirs up a storm to sink Ulysses' vessel. Athena save his ship and he makes land at Scheria where he receives a warm welcome from the royal family who practise traditional Greek hospitality to strangers. When they hear that he is the famous hero of Troy they promise him help but entreat him to recount his adventures.

Ulysses passes the night relating the events which led to his imprisonment by Calypso. He tells of being blown off course and ending up on the Land of the Lotus Eaters. If you eat the lotus plant you lose your memory and your ambition. Ulysses must fight to pull his men away and continue the voyage. In an act of curiosity they decide to explore the land of the Cyclops, cannibalistic one-eyed giants. As they scout the territory they are trapped by the Cyclops Polyphemus but Ulysses blinds his captor and they escape. The friendly wind god, Aeolus, captures adverse winds in a bag and they are thus able to sail close to Ithaca. However, the crew think that the bag contains treasure and open it so that the winds blow them back to Aeolus. The god suspects that they have a divine curse and helps them no more. The next peoples, the Laestrygonians who are also cannibals, sink the fleet, except for Odysseus' ship which sails to Aeaea the home of Circe, an enchantress who turns some of them into pigs. The god Hermes aids Ulysses to defeat her and they begin an affair. She reverts the spell on his men and helps the group to depart telling them that they should make for Hades, the Land of the Dead.  It is there that Ulysses' mother visits him and he receives a prophecy from Tiresias, a seer. After surviving the temptations of the Sirens' songs and a fight with Scylla, the six-headed monster, the sailors arrive at Helios, the island of the Sun god. They were warned not to eat the cattle on the island but do so while Ulysses is absent.
This enrages Zeus and he destroys the ship as it is sailing away. All the crew are killed, except Ulysses who floats to the island of Calypso where he remains for seven years.
On finishing his tales the kings return Ulysses to Ithaca. There Athena dresses him as a beggar and he goes to the cabin of Eumaeus, his faithful swineherd, where he is well received and fed. When he meets Telemachus Ulysses reveals his true identity and they plot together to retake Ithaca from the suitors by massacring them.

Homer (900 B.C.)
The Iliad
Hesiod (700 B.C.)
The Theogony
Email ThisBlogThis!Share to TwitterShare to FacebookShare to Pinterest