- The Canterbury Tales by Chaucer 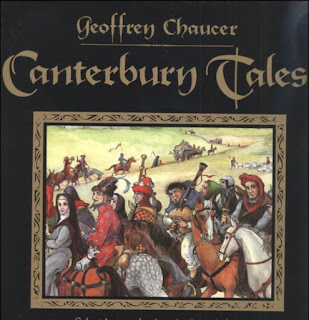 The Renaissance in the North of Europe followed on that in Florence. However it was not influenced by classical Rome and Greece but by religion. The Italian literary Renaissance wrote in the vernacular rather than traditional Latin; the Northern European writers did the same.

Medieval society was composed of three estates: the church, the nobility and the peasantry. The church consisted of those who prayed but did not work for a living. The nobility were a class ruled bound by chivalry and courtly traditions. The remaining population were the peasants. This strict social division was crumbling during the Renaissance. There was a rising merchant class and a secular intellectual class outside the Church. As a wine merchant's son and clerk to the king Chaucer was part of both of these new classes.

In the late 14th century this social structure was breaking down. John Gower wrote three major works in French, English, and Latin with themes of religious ethics. He blamed the English social structure for the great peasant revolt in 1381. In towns and cities a new middle class of merchants, lawyers and clerks was coming to power.

The times were chaotic in England with the Catholic Church going through changes and the Lollards rebelling against ecclesiastical power. The bubonic plague also saw many begin to question religious beliefs. The Canterbury Tales describes and satirises these unsettled times.

Boccaccio's Decameron (1348-1353) possibly influenced Chaucer's Tales (1387-1400). Both books are similarly structured as frame stories incorporating tales told by the different characters. Both are also written in the vernacular instead if the traditional Latin.

Novelle (1390-1402) by Giovanni Sercambi may also have influenced Chaucer. Its frame narrative presents some people escaping from the plague, as in Decameron. They travel across Italy telling stories on the way in inns and in gardens.

The Prologue is the story by the narrator who sets the frame for the other characters' narratives. He introduces and comments on 27 of his companions, representatives of the society and its tensions. He is at the Tabard Inn, London, to join the group pilgrimage to Thomas Becket's shrine in Canterbury. The innkeeper promises a banquet to the best storyteller on the trip.

There follow the narratives of each character in their own voices. Their stories tend to balance out each other. The Knight's tale of chivalry is followed by the Miller's lewd story involving deception, adultery and flatulence. The Reeve then retorts with the tale about a cheating miller who gets his comeuppance. Many of the fables are familiar stories with a personal spin. They are all portraits which compose a picture of the contemporary society.

The personal narratives can be grouped thematically. Several refer to women's roles in marriage. The Wife of Bath argues for female independence by subverting courtly norms. The Clerk tells a tale which counters that by affirming that marriages are most happy when the wife is obedient. The Franklin treads a middle path in his tale of power sharing in a young couple's marriage.

The Church comes in for criticism due to corruption. The Friar tells the tale of a corrupt summoner, while the Summoner narrates the story of a friar who cheats his parishioners. They illustrate the abuses in the Church and the conflicts among the religious orders. The clergy are parodied for their hypocrisy.

The book ends inconclusively as regards the many conflictual themes it raises. The final tale is that of the Parson, an honest cleric, who gives a moralising sermon to his fellow pilgrims. Chaucer concludes the book itself by apologising to his readers for any of the extreme content in his work which might offend morality.

- Genre. The many stories in the Tales can be grouped into styles of narrative.

The Romance tales have refined stories of love and war as their content. The chivalrous Knight's tale and the Wife of Bath's narrative are examples.

Tragic stories were told in poetry, not theatre, in the Middle Ages. Drama was linked to 'the wheel of fortune' which spun in the sky. You could have good or bad fortune but couldn't choose. The Monk's tale is a story of fortune.

Fabliau was a comic tale. It was usual among the lower social classes. The Miller's Tale is an example.

The sermon had a clear structure in 3 parts: a biblical reading, a development on the theme of the passage then stories illustrating the theme. The final tale by the Pardoner fits this genre.

Moral literature whose aim was to teach examples about living the perfect life as in The Monk's Tale, and The Knight's Tale

- Structure. The frame narrative told by the narrator encompasses and lends structure to the characters' individual tales.

All the characters and their tales are presented according to their social rank. The first estate is represented by the Knight, the second by the Church and the third by a a motley of characters who extend from the rich to the poor.

The characters are also grouped round relationships: the Knight, his son and the yeoman. The Prioress is travelling with a companion and 3 priests.

The frame narrative is religious since all the characters are on a pilgrimage. However, as we hear from their tales some are pious travellers and others are tourists.

Among the religious pilgrims several are obviously corrupt, reflecting the Church in the Middle Ages which became immensely wealthy through selling religion. The Monk supposedly worships in a monastery but is an excellent huntsman with an array of hunting tools at his disposal. Friars vowed poverty and relied on charity to live. However in the The Friar's tale the teller is shown to be hypocritical and greedy. He attacks the Summoner through his tale of a summoner who ends up in hell. Ironically a Summoners job was to bring sinners to the ecclesiastical court for punishment. Pardoners were those who sold indulgences for the forgiveness of sins and in his tale he admits to also selling false relics. For her part the Prioress wears a rosary which resembles a piece of fine jewellery more than a religious object.

The pilgrims are a motley crew who come from different backgrounds such as the court, the Church, villages and feudal farms. However they are mostly of the working professions like the Franklin restaurateur or farming Plowman. They are also representatives of the new non-aristocratic social class, just as Chaucer himself.

Theirs is an informal company held together by the pilgrimage and by storytelling, though some personal barbs are also aimed through their narratives. However, most of the characters end their tales wishing their companions well, like the courteous Knight: “God save al this faire compaignye”.

Telling lies is a technique used by Chaucer to show the real natures of his characters. The drunken Miller tells a tale of adultery scheme designed to expose John's stupidity. It also show infantile cruelty when the protagonists make fun of his broken arm. The Pardoner admits to selling false relics but at the end of his story offers to sell counterfeit relics to his fellow pilgrims. His lack of shame is well exposed. The author uses the storytellers' own deceit to satirise their morality.

The General Prologue sets the scene for social satire which continues throughout the Tales. Courtly love is satirised in the Nun's Priest's Tale by setting chivalry in a barnyard. When the fox and the rooster play out an animal version of the conflict between the peasants and the nobility there is also a veiled satirical reference to the 1381 Peasant revolt.

Clerical characters are caricatured as corrupt and hypocritical. The Wife of Bath parodies religion by interpreting the Bible to contradict itself and support her idea that the only real authority is experience. Chaucer also mocks himself in the book as an inept nitwit.

The hierarchical estates of Medieval society are subverted in the Tales when the pilgrims respond directly to each other. The Millar does not wait his allotted rank but butts in after the Knight to tell his story. They are all levelled, too, by the fact of the pilgrimage: all pilgrims walking together to Canterbury.

This kind of love is chivalrous and exists on an idealised, spiritual level. The Knight's Tale is the example where two knights contend for a maiden. The Squire is characterised in the image of a courtly lover wearing elegant clothes, careful with his appearance, musical, a dancer and a jouster. He is also so passionate in love that it renders him insomniac.

Courtly love is also satirised in The Miller's Tale where it is parodied through a joke about flatulence and its central theme is sexual rivalry. The fox and the rooster set courtly love in a henhouse where Chanticleer is tricked by a hungry fox. The Wife of Bath speaks frankly about her five husbands. She asks the courtly knight in her tale what women really want.