- The Six Enneads by Plotinus 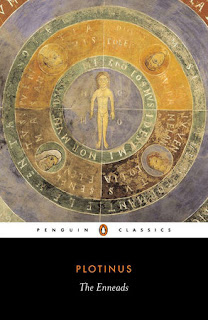 Neoplatinism was the dominant philosophy among the Greco-Romans from the 3rd century to the Arab empire in the 7th century. It was a comprehensive theory of the universe and the place of the individual in it, a synthesis of the Hellenistic tradition until then (except for  Epicureanism which it rejected). It was also a mystical philosophy that believed in the domination of the mind over matter. Its second principle was monistic and argued that there is a single cause, considered divine, that could explain everything. This principle is believed to be a conscious Being.

Plotinus (205 - 270 A.D.) is credited with the revival of platonism in the third century. He was born in Egypt and studied philosophy in Alexandria which was part of the Roman empire. He settled in Rome where he decided to recover hellenic philosophy based on Plato and the theories of Ammonius Saccas.

He became a friend of the emperor Gallienus and they planned to build a city near Rome based on Plato's Republic. However, the project fell through and Plotinus turned to writing.

Plotinus is the link between the long Greek philosophical tradition and the beginnings of christianity. His biography was written by his disciple Porphyry who also edited Enneads after his death.

His writings are inspired by Plato but also based on his own mystical thinking. In the 19th century the term neoplatonism was coined by German scholars to designate the ideas which replaced the old materialist thought such as Epicureanism and Stoicism. This neoplatinist ideology lasted from the crisis of the Roman Empire around 350 A.D. to the Arab conquest in the 7th. century.

Porphyry edited Plotinus' texts into six sections subdivided into nine treatises which gives the opus its name from the Greek ennea meaning nine. They consist of an inquiry into the soul and its relationship with the divinity.

The First Ennead deals with virtue, happiness and beauty and shows how Platonic dialect is able to discover reality.

The Second Ennead analyses matter and the link between potentiality and actuality.

The Third Ennead examines Providence and free will and gives a description of time and eternity.

The Fourth Ennead considers the relationship between body and soul and the immortality of the latter.

The Fifth Ennead considers the three principles of reality: the One, the Intellectual and the Soul.

The Sixth Ennead analyses Being, the Intellectual Principle and the ideas within the Intellect. It ends discussing the moral nature of the One, the Good.

There are 3 basic principles to Plotinius' metaphysics: the One, the Intellect and the Soul. They are all explanations and realities of existence:

"The First, then, should be compared to light, the next [Spirit or Intellect] to the sun, and the third [soul] to the celestial body of the moon, which gets its light from the sun."

This is the first cause of itself and everything else's existence in the universe.

"Those who believe that the world of being is governed by luck or chance and that it depends upon material causes are far removed from the divine and from the notion of the One."

The arguments for the necessary existence of the One are based on the presocratic scientific tradition. This posits that the complex evolves from the simple. Following the logic of this line of thought the basis of all existence must be the uniquely uncomplex. In the Republic Plato called it the 'Idea of the Good'.

This is the first derivation from the One. It is the site of all Forms which predict the properties of all things. In describing the Intellect Plotinus supposed that he was following Plato who declared that the Form of the intelligent animal was continuously contemplated by an intellect called The Demiurge. Plotinus' interpretation of this contemplation was that it only reflected an image of eternal reality, that is, itself. Plotinus also thought that Aristotle had argued in favour of the eternity of the Intellect when he referred to the Unmoved Mover and stated that it operated through self-contemplation.

Plotinus contended that the Forms must have a superior virtual principle: the One, to ensure that they were always unified and that there existed a necessary truth. He offers the analogy of the body where three-dimensionality and solidity are both necessary aspects. Both are also virtual aspects of the body.

The Intellect is an account of the differences in the many Forms which are united in the One. 5 and 3 have different forms but they can be virtually united by = in the statement : 5 + 3 = 8. In the same way the Intellect can encompass all that can be thought about the One. Intellect is the intelligibility principle while the One is that of being.

This is the third fundamental principle. Soul is the principle of desire for something outside the desirer. All life acts to satisfy desire, from plants to humans, for example for food, knowledge or procreation which Plato says is a desire for immortality. (The Soul's desire is distinguished from the Intellect's desire because this is satisfied by the eternal contemplating of the One.)

"The soul in its nature loves God and longs to be at one with Him in the noble love of a daughter for a noble father; but coming to human birth and lured by the courtships of this sphere, she takes up with another love, a mortal, leaves her father and falls."

This is identified with evil by Polonius because it lacks form and so intelligibility. Matter explains the lack of clarity in the sensory world for Nature is made up of Forms in matter.

"When the soul has descended into generation (from its first divine condition) she partakes of evil, and is carried a great way into a state the opposite of her first purity and integrity, to be entirely merged in which, is nothing more than to fall into a dark mire. …The soul dies as much as it is possible for the soul to die: and the death to her is, while baptized or immersed in the present body, to descend into matter, and be wholly subjected by it; and after departing thence to lie there til it shall arise and turn its face away from the abhorrent filth."

The cause of all things is the One so it also causes matter and thus evil. Sensory reality is made up of images of the intelligible world. Matter allows the formation of ithese images of Forms in the world of the senses. It is evil in an abstract way only when thought of as the opposite of the Good. When humans choose to attach to the bodily senses they are moving in an evil direction since they have a corrupt desire for the unintelligible.

Plotinus disagrees with Plato's conception that art imitates appearances and is thus twice removed from reality. The author views art as directly emanating from the One. In fact the more beautiful a thing is the nearer it is to the One.

But Beauty is not conceived simply as symmetry.

"Beauty addresses itself chiefly to sight, but there is a beauty for the hearing too, as in certain combinations of words and in all kinds of music; for melodies and cadences are beautiful; and minds that lift themselves above the realm of sense to a higher order are aware of beauty in the conduct of life, in actions, in character, in the pursuits of the intellect; and there is the beauty of the virtues...."

The artist for Plotinus is a creator who takes incomplete Nature and reshapes it. Beauty is this new form imposed by the artist. It is an insight into the One because it introduces new forms. In fact the artist participates in the three basic metaphysical principles of Plotinus: artists shape their materials using intellectual knowledge and the emotion of the soul to lift their material up to the One. Plato presents art as slavish imitation whereas Plotinus claims the artist is a creator.