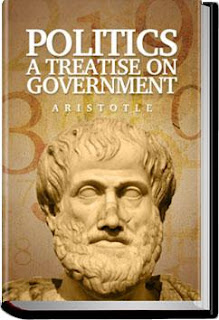 In the final chapter of Nicomachean Ethics (c. 350 BC) Aristotle establishes a relationship between individual morality and civic ethics. He charges the polis with the education of virtuous citizens. Politics (c. 335–323 BC) offers details of how to achieve these goals.

Plato's Republic provided a utopian outline of how to manage the affairs of State but Aristotle proposes a more realistic blueprint drawn from the people and societies of his time. Politics is a commentary on the Greek political state and the most efficient way to govern.

Aristotle (384–322 B.C.) was born in Stagira in the Kingdom of Macedonia where his father was court physician to Amyntas III, grandfather of Alexander the Great. However the author lived most of his life in Athens and expounded the idea that the polis was the highest system of human association. His basic political premise is that the city state is the only sensible political organisation.

The polis of Aristotle's time was made up of citizens, slaves, non-citizen manual labourers, children, women, and immigrants. The citizens were the governors of the city state and the rest of the population provided for their upkeep. The system was exploitative but produced a cluster of philosophers, dramatists, artists, and architects. Ironically, though he considered Athens a political model, Aristotle never became an Athenian citizen.

Another irony was that Aristotle had a close relationship with the powers in Macedonia, serving as a tutor to the 13 year-old Alexanders the Great who finally unified all of Greece and rendered the independent Greek poleis obsolete.

For Aristotle humans are naturally political animals. They achieve their goal to create a good life for themselves through working in the city-state.

At the beginning of Politics the author considers human relationships in life: husband and wife; parent-child; master-slave. He briefly analyses slavery and wonders if it is always bad, or ever good. He concludes that there are two types of slavery - one is imposed legally, the other is natural. If natural slaves exist then they are not like humans but similar to beasts. All of nature is a system of rulers and ruled so slavery makes sense since these are good at basic tasks. The slave/master relationship is likened to the monarch/subject one. It is not unjust, though, to enslave someone who is not a natural slave.

Survival is another discussion and deals with how people get the necessities of life. The basics of life, food and shelter, are 'natural' for the author but he rejects the accumulation of more than essential needs.

Other relationships in the household are then considered. That of a man and his children is similar to a king's. The connection between man and wife is political, although only men are fitted to be rulers. Relationships develop and change depending on roles and circumstances.

Aristotle then reviews different types of regimes. The ideal regime does not exist but there are three positive ones: constitutional government, aristocracy and monarchy. These political systems are good because they are egalitarian: the privileged all get the same treatment and the underprivileged receive equal treatment at their level. The privileged contribute more to society and so receive advantages.

The constitutional government is optimum because it has a fixed set of rules. Although a monarchy and an aristocracy may be beneficial if they find good leaders. The negative regimes are: oligarchy, tyranny and democracy.

The author analyses the dangers in different governmental forms. When a monarchy is perverted it falls into tyranny where the ruler is unjust. A corrupt aristocracy turns into an oligarchy. A degraded constitutional government becomes a democracy, the least terrible perversion. Successful societies rely on the middle classes who bridge the gap between rich and poor. The most appropriate system of government will depend on the society. If there is a large middle class a constitutional government is appropriate; if there are more poor people a democracy. The philosopher's conclusion is that the best form of government lies in the middle ground between rich and poor. This stimulates participation, if there is a qualification for governing like owning property. In a civic government there are three factions: deliberative which creates laws, executive which decides and judicial which enforces the law.

Governmental change is now dealt with. This usually comes about because of unhappiness in the way a government is run. Aristotle offers advice on how to maintain a stable government. His basic recipe is to keep those not in power happy. They should have educational opportunities and be treated with respect. Aristotle's ideal goal is for each citizen to achieve his peak of happiness. Happiness comes from the freedom to reason and everything else in the polis is aimed at encouraging happiness. The ideal city would be not too large but big enough to remain autonomous. Citizens should be able to participate in all aspects including government, military, religion and land owning. Labouring should be left to slaves. A education programme is needed which would include art, literature, music and physical exercise. Anything that stimulates the mind is to be valued.

Teleology is the philosophical interpretation of natural phenomena as showing purpose or design. Aristotle appears to assume that there is a purposeful activity in nature just like that we see in human behaviour. His premise is that everything has an intention and the world is rational and ordered. Human purpose is fulfilled through our faculty for reasoning. This view of the Cosmos is questioned by quantum physics nowadays where the subatomic world is ruled by chaos summed up in the Heisenberg's 'uncertainty principle': chance rules the universe.

In his Nicomachean Ethics Aristotle explains that human purpose is happiness and this is achieved through reason which is humanity's defining faculty. When they manage their actions and feelings according to reason they live according to virtue and experience happiness and fulfilment. The happy life is the virtuous life.

The goal of Politics is to define the perfect state using the same assumptions. Using these premises Aristotle determines what kind of political association is most conducive to individual happiness.

“If then nature makes nothing without some end in view, nothing to no purpose, it must be that nature has made all of them for the sake of man.”

The author argues that humans are naturally sociable and so political. The State must then meet their physical needs, their desire to be sociable, their aspirations to justice and to lead a full and happy life. He believes that the interests of the individual and the State coincide. This clashes with the modern view from the Enlightenment in which the individual needs to be protected from the power of the State. Aristotle's theory is totalitarian in conception since he argues that the individual can only be fully human when completely involved in the affairs of State.

In book 4 Aristotle addresses the question of the possible dangers of the State for individuals. His solution is to advise that the law acts as a defence against tyranny. The totalitarian State has one omnipotent leader who claims to reflect the will of the people. However, the idea of a totalitarian state is a misnomer since there is no State, just the will of the supreme leader who is accountable to nobody.

On the other hand in chapter 8 Aristotle suggests that there is no clear distinction between private and public life and that individual and State interests coincide. The State, not parents, should educate the young because they are the future rulers and the education system should serve the interests of the State. The explanation may lie in the difference between the ideal and the deviant State. In the utopian State leaders are virtuous and govern following the law. The are chosen on merit as part of an aristocracy. The primary function of the State is to make sure that that citizens can lead virtuous lives and so achieve happiness. This can be accomplished efficiently through education thus ensuring the State's own stability.

On the other hand deviant regimes give power to those who have wealth or are popular, not to virtuous leaders chosen for their merit. This is the danger of tyrannical power which pursues personal not common interests.

In books 3 and 4 Aristotle suggests that an effective classification of regimes is their economy. Tyranny appears as a form of control where the monarch controls citizens for his own ends like the master manages his slaves who are his property. Oligarchy occurs when the constitution is in the hands of an elite who control great wealth. Democracy happens when those who have no wealth have power.

“…it is a democracy whenever the free are sovereign, oligarchy when the rich are sovereign; but what actually occurs is that the former are many, the latter few: many are free, few are rich.”

He also uses a class argument in putting forward a case for the group in society who possess moderate means and only wish for stability. In book 5 he claims that absolute oligarchy and total democracy are unstable in the long run so he suggests a compromise. The constitution would be created around the middle class which would mean a system nearer to democracy than a constitution of the few. It would thus be more stable. This can be related to his thesis that the 'middle way' is the best, the most virtuous and the happiest. The most successful States are probably composed of moderately successful citizens who do not pursue wealth for its own sake. Happiness is achieved through good character and intellect with only a moderate amount of possessions.

Aristotle maintains a certain meritocratic concept in justice when he suggests that honours and wealth should be distributed according to merit. However, non-citizens, like himself, women and slaves have no opportunities. They are condemned to the lowest level of society by defining merit in terms of qualities that their low states denies them. This aristocratic stance, on the other hand, is balanced by his sense of the possible abuse of power. In Book 3 he affirms that all citizens are accountable.

Aristotle's Ethics and Politics are interwoven.

- One major theme that connects both books is virtue. In Ethics the author presents virtue as an important basis for achieving happiness and the best possible life. In Politics Aristotle writes:

“...the association which aims in the highest degree and at the supreme good is the one which is the most authoritative and includes all the others. Now this is called a ‘state’ [polis], and it is a political association.”

Both the State in Politics and the individual in Ethics aim at the highest good which is related to virtue.

In Ethics Aristotle views virtue as vital in achieving happiness. A person must strive to be virtuous in order to be happy:

“... for he will be engaged always or most of all in actions and studies of things done according to virtue, and he will bear the fortunes of life and to be ruled as a citizen so that the polis will prosper."

- A second relationship between the texts lies in the roles fulfilled by slaves, women, farmers and artisans. These groups are not part of the political polis and so they cannot pursue the ideal life. However, they do help the city State to improve.

- Rulers are important in the polis since they make decisions about living the best life and who is admitted to citizenship. In Ethics the author argues that the leader of the State must improve the lives of the citizens and make sure that they obey the law. In Politics a citizen should have the ability to rule.