- On the Crown by Demosthenes 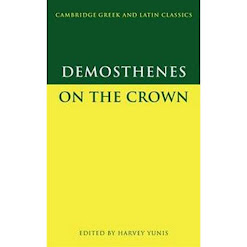 The Greek city states finally put an end to invasions by the Persians by their victory at the battle of Plataea in 479 BC. Using its powerful navy, Athens now dominated the Greek city-states along the coast of the Aegean Sea, as well as on the many islands. They soon formed part of an Athenian empire which lasted until 404 BC.

During the last 3 decades of this period the Spartans competed with the Athenians over the panhellenic empire. This engendered the Peloponnesian wars (431–404 BC) in which the Spartans were victorious, so ending the Athenian golden age.

During Athens' imperial power drama, philosophy, literature, art and architecture flourished. The city's economic influence stretched from the Mediterranean to the Black Sea making it very wealthy. Democracy emerged as the political practice of the State. The democratic system relied on persuasion rather than force and this engendered the sophist movement. These were itinerant teachers of rhetoric such as Gorgias and Protagoras who coached aspiring youths on how to influence public opinion through speeches.

After the demise of the Athenian empire Sparta and Athens continued to vie for power over the Greek city states and both enlisted their former enemy, Persia, in attacking each other. Meanwhile the kingdom of Macedon was rising to power to the north of the hellenic polis. When the Macedonian ruler, king Perdiccas, died in 359 BC, Philip became regent then took over the throne for himself. He began an offensive against Athens which controlled Thrace. Thebes and Thessaly then revolted against Athens and asked Philip for help. He intervened and then annexed Thessaly threatening Thebes, too. His territory now stretched to the Danube in the north, Thrace in the east and to central Greece with Thessaly in the south. On his death in 336 BC his expanded empire looked like this: Demosthenes (384 —322 BC) saw Philip II of Macedonia as a threat to the Athenian city state. In his first Phillipic he put forward a plan to stop Philip by military action but was voted down by the Assembly. In 349 BC when Olynthus requested help against Philip the orator gave three more speeches advising armed combat against the invader His advice went unneeded and the next year the Macedonian razed the city and enslaved its inhabitants.

In 346 BC Demosthenes headed a diplomatic effort for peace negotiations between Athens and Philip. This resulted in a 6 year peace but both sides continued to seek alliances in preparation for war. This ensued and in 338 BC Macedonia was victorious over the Athenian allies at the battle of Chaeronea. Philip did not intervene further in the hellenic city states but turned his attention to invading Persia.

In 336 BC Ctesiphon had proposed that Demosthenes should be awarded a golden crown for his services to Athens. This was approved but Aeschines opposed the idea declaring it unconstitutional. However the crown was awarded to Demosthenes. Further arguments on the matter were set aside because Phillip was assassinated and replaced by his son Alexander who not only put down a revolt in Thebes with brute force but carried through his father's plan and invaded Persia.

Despite the interim Aeschines had not forgotten his litigation on Ctesiphon's proposal to acknowledge Demosthenes with the golden crown prize. In his 330 BC speech directed against Demosthenes, Aeschines presented his opponent's career very unfavourably underlining his offenses against the law, in particular having accepted bribes from Philip of Macedonia. (The same charge that Demosthenes launched against him.) As a witness for the defense Demosthenes delivered a response to Aeschines’ accusations in his speech On the Crown.

The speech comprises 324 sections and 38 additional documents of evidence introduced during the discourse. The latter have not survived.

Demosthenes follows the chronological order which structured Aeschines previous lecture: before 324; 326-340; 340-338; after the defeat at Chaeronea in 338. However he addresses the first three periods and passes over the last one.

The orator introduces his address by reminding the 500 jurors of their oaths to maintain the law. He then criticises Aeschines' allegations about his private affairs encouraging jurors to dismiss them.

He then talks of the charges levelled against his public career noting that his opponent delayed a long time before bringing them to court. He also asserts that the charges are laid against Ctesiphon, not himself.

“It is a fair inference that all his accusations are equally dishonest and untruthful.”

Demosthenes then discusses the first part of his career centering on the Third Sacred War (355-46 BC) when Philip took the side of Thebes against Phocis, an ally of Athens. He accuses Aeschines of accepting bribes from Macedonia.

The orator then proceeds to the second phase of his public life. He declares that several cities had voted to award him the crown.

In On the Crown Demosthenes assumes that his Athenian audience looks back with nostalgia and pride on the defeat of Persia and the imperial age that followed it. He plays to these sentiments in justifying his longstanding opposition to the more recent Macedonian campaign to conquer Greece.

In conclusion Demosthenes assails Aeschines with a series of rhetorical questions, demanding to know what accomplishments he has achieved, what public awards he has won, what policies of his have been put in place, what alliances he has created, what successful projects he has ever undertaken. Calling Aeschines an “incorrigible knave,” Demosthenes further accuses him of refusing to contribute financially to Athens’ defense even though he had inherited a fortune from his father-in-law. Aeschines had compared Demosthenes unfavorably with Athens’ great leaders of the past. In response, Demosthenes accepts the comparison (with pretended modesty), but asserts that the jurors should really compare him not with the great heroes of another age, but with politicians of his own age—and especially with Aeschines and his friends.

In a final prayer, Demosthenes hopes that the gods:

“...implant even in them [his opponents] a better purpose and a better spirit” and “to us who remain grant speedy deliverance from the terrors that hang over our heads, and a salvation that may never fail."

Demosthenes finally defeated Aeschines by an overwhelming majority of votes. As a result, Ctesiphon was acquitted and Aeschines fined and forced into exile.

At the heart of Demosthenes' speech is his use of key elements of rhetoric as outlined by Aristotle: Ethos, integrity and moral authority; Pathos, emotional appeals; Logos, logical appeals; Lexis, style.

Demosthenes makes use of direct appeals to his listeners through attention calling procedures which establish a direct relationship with the audience. Second person pronouns are used to address Aeschines and the listeners directly and also to draw the attention of the audience. He sprinkles his speech with rhetorical questions: "what should the city have done?" This is sometimes backed by hypophora, an artificial dialogue of questions and answers. This triangular set-up isolates his opponent and serves to involve listeners' empathy and maintain their concentration at the same time.

"And now, when I am about, as it seems, to render an account of my whole private life and public career, I would once more invoke the aid of the gods; and in the presence of you all I pray, first, that the goodwill which I ever feel towards this city and towards all of you, may in equal measure be vouchsafed to me by you at this trial; and secondly, that whatsoever judgment upon this present suit will conduce to your public reputation, and the purity of each man's conscience, that judgment they may put it into all your minds to give."

He moves his audience through nationalism when alluding with nostalgia to Athenian pride on the defeat of Persia and the imperial age that followed it. He plays to these nationalistic sentiments in justifying his longstanding opposition to the more recent Macedonian campaign to conquer Greece

This deals with the speaker’s character or authority. Demothenes uses invective to undermine Aeschines' worthiness as a responsible speaker calling him a contemptible, self-deluded charlatan. He also attacks his opponent personally using irony. Adopting an Olympian self-assurance, he looks down on Aeschines' attempt to impugn his own illustrious record of public achievement.

Eliciting national pride by describing Athens' grandeur he suddenly moves the subject to Aeschines' deficiencies which appear all the more pathetic.

He excels at inviting the audience to draw strong moral inferences. By depicting the protagonists in action — Aeschines colluding, he resisting — Demosthenes forms the support for his judgments condemning his opponent as a traitor and defending himself.

"I call you the hireling, formerly of Philip, and now of Alexander, and so do all who are present. If you disbelieve me, ask them--or rather I will ask them for you. Men of Athens, do you think of Aeschines as the hireling or as the guest-friend of Alexander? You hear what they say."

Demosthenes' argument derives its flow from the historical narrative of events in which it is embedded. His storyline comprehends a core of indisputable, commonly accepted facts despite the fact that Demosthenes does not aim at objectivity or disinterested truth.

Everything Demosthenes says about the conflict with Macedonia is subordinated to his polemical purpose. He distorts the facts where he can, casts them in a light favorable to his case and omits them if they are inconvenient. In this way he builds up a story of absolute good versus absolute evil, in which he and his audience are the heroes who faced down Philip while Aeschines, and his party were traitors.

He uses amplification: the use of two words instead of one to underline the importance of a concept: "chosen and preferred". This is a frequent ploy used by Demosthenes :

Demosthenes wants to be perceived as a spontaneous speaker, though his speech is actually well thought out. To achieve this he uses parenthesis, sudden breaking off of thought or sentence and self-correction.

He uses long lists of rhetorical questions to demonstrate the little service his opponent has given to the city:

"For what alliance has the city gained by negotiations of yours? What assistance, what fresh access of goodwill or fame? What diplomatic or administrative action of yours has brought new dignity to the city? What department of our home affairs, or our relations with Hellenic and foreign states, over which you have presided, has shown any improvement? Where are your ships? Where are your munitions of war? Where are your dockyards? Where are the walls that you have repaired? Where are your cavalry? Where in the world is your sphere of usefulness? What pecuniary assistance have you ever given, as a good and generous fellow citizen, either to rich or poor? 'But, my good sir, 'you say, 'if I have done none of these things, I have at least given my loyalty and goodwill.' Where? When?"

In 322 BC Alexander's successor, Antipater, advanced on Athens. Demosthenes and other orators fled the city. To avoid capture by the Macedonian troops Demosthenes committed suicide by taking poison.

In Roman times Cicero's speeches against Mark Anthony, also called the Phillipics, were inspired by Demothenes.

In the Middle Ages and Renaissance Demosthenes  was the most widely read author, next to Cicero.

In the modern age he inspired the writers of The Federalist Papers, which argued for ratification of the U.S. Constitution, and major orators of the French revolution. Frederich Nietzsche was also said to imitate the style of Demosthenes' speeches.