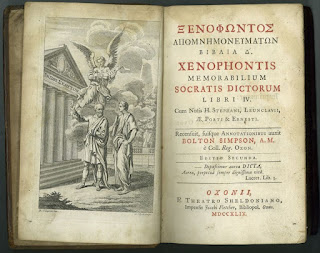 Xenophon (440-354 BC) was as disciple of Socrates, like Plato. Both chronicled the master's life and philosophy from different perspectives, although Xenophon's picture of Socrates is more practical. Plato's interpretation of the socratic epistemology: virtue as knowledge, is also absent from Xenophon's account. Both agree that Socrates was a critic of the Athenian social and political system.

The Memorabilia, written before 371 BC, is structured round conversations with others and some speeches. The interlocutors are diverse: a prostitute, an aspiring politician, Pericles' son, a malcontent...

The aim of the work is to refute the charges against Socrates at his trial by using his behaviour and tenets to demonstrate their falsity. Xenophon's arguments are based on the socratic ideal of the true good, but it is more Xenophon's interpretation than a reflection of socratic thought on the question.

There are historical errors which suggest a work of fiction, not fact. Indeed Xenophon, unlike Plato, was not actually present at Socrates' trial.

Book 1 Xenophon lays out a defense of Socrates against the legal accusations against him at his trial. He recounts the philosopher's piety and respect for fortune-telling. He did not speculate about the Kosmos but centred his attention on human affairs such as justice, godliness, prudence, courage, cowardice, statesmanship, and governance.

In his dialogue with Aristodemus the philosopher offers the religious argument. He presents God as a monotheistic designer in touch with nature.

On the charge of corrupting youth Xenophon's defense of Socrates is to reaffirm his moral self-control:

Book II is made up of 10 sections. Xenophon asserts that his maestro always promoted moral virtues among his associates by advocating self-discipline. He recalls a conversation with Aristippus as an example where Socrates asserts that suffering caused by free action is more tolerable than unimposed pain.

Another example is tale of the choice of Herakles. This young man is approached by Vice and Virtue who try to entice him. The story ends before Herakles chooses.

Human relationships such as parent-child and friendships come under discussion as part of the good life. In a conversation with Aristarchus the philosopher recommends him to put his numerous family to work since they will he happier because work brings virtue.

Book III demonstrates how Socrates helped those with virtuous intentions to further their aims. He advised the general, Dionysodorus not only to teach commanding to his students but also attend to them and their needs personally as well as acquiring virtue himself. The philosopher argued that to be a good military leader you need to ensure the happiness of the troops and make them better human beings.

Understanding human nature must be combined with practical knowledge in order to be a good leader. Exercising self-control and moderation are also necessary traits.

Socrates visits a well-known prostitute to talk about friendship. The story is told with humour and double meanings and is an unusual example in contemporary Athens.

“…(t)here is no kind of struggle, apart from war, and no undertaking in which you will be worse off by keeping your body in better fettle.”

Book IV Xenophon develops the theme of Socrates helping others. Euthydemus thought himself wise because he had found the works of poets and sages. Socrates initiated a dialogue with him to convince him that his righteousness and pride actually required more instruction. The philosopher insists that prudence, moderation and good habits are the moral qualities needed.

Socrates is described by Xenophon as on a mission to make his contemporaries more law-abiding, prudent, moderate and self-controlled. This final quality is necessary for freedom because nobody is free who is governed by bodily pleasures. As a leitmotif he offers an interpretation of the Delphic oracle inscription "Know thyself". To help others you should:

“…consider what sort of a creature he is for human use and get to know his own powers.”

This book ends with a eulogy on Socrates by his disciple:

"All who knew what manner of man Socrates was and who seek after virtue continue to this day to miss him beyond all others, as the chief of helpers in the quest for virtue. For myself, I have described him as he was: so religious that he did nothing without counsel from the gods; so just that he did no injury, however small, to any man, but conferred the greatest benefits on all who dealt with him…To me then he seemed to be all that a truly good and happy man must be."

Xenophon's main aim in Memorabilia is to disprove the legal charges laid against Socrates whch were: not worshipping the State gods and corrupting the youth.

The author presents his teacher as a role model of self-control and insists that he through his own good behaviour he had always taught the Athenian youth how to live properly. In short that Socrates walked his talk and instead of professing his teaching set an example.

Xenophon expresses astonishment that Socrates might be thought impious since he knows his devotion to the gods. He declares that the philosopher not only did not dare to intervene in affairs regarding the gods but that he argued with people who wanted to do so. He describes his maestro not as an explorer of all questions but as a thinker who concerns himself only with social behaviours. He writes that Socrates perceived the deities as the ultimate authority and did not question that.

"He did not even discuss that topic so favored by other talkers, "the nature of the universe": and avoided speculation on the so-called Cosmos of the sophists, how it works, and on the laws that govern the phenomena of the heavens: indeed he would demonstrate that to trouble one's mind with such problems is sheer folly."

Socrates is not presented as a fan of the sciences. Xenophon's account portrays him as saying that basic geometry was acceptable but that he could not see the use of the more complicated figures. It was the same with astronomy where the philosopher could not understand the useful purpose of all those calculations and preferred to spend his time on other types of study.

Xenophon exempifies Socrates' attitude to science in his reaction to the analyses of Anaxagoras:

"For that sage, in declaring the sun to be fire, ignored the facts that men can look at fire without inconvenience, but cannot gaze steadily at the sun; that their skin is blackened by the sun's rays but not by fire. Further, he ignored the fact that sunlight is essential to the health of all vegetation, whereas if anything is heated by fire it withers. Again, when he pronounced the sun to be a red-hot stone, he ignored the fact that a stone in fire neither glows nor can resist it long, whereas the sun shines with unequalled brilliance for ever."

Socrates may claim to be following the scientific method, but as an amateur he is over-confident and assumes that the natural laws are obvious. However Xenophon does not hold this against his teacher. As a soldier and historian himself he was more interested in the practicalities of life than metaphysics.

Dialogue is another way Xenophon presents examples. Some of the basic advice Socrates offers is that practice makes perfect:

"No, Critobulus, if you want to be thought good at anything you must try to be so; that is the quickest, the surest, the best way. You will find on reflection that every kind of excellence that people recognize is enhanced by study and practice."

Recognition by others is a priority in this discourse. This denotes interest in practical, not abstract, ideals.

Socrates' advice to Aristarchus on how to feed his large femake family shows an idea of rigid roles in society:

"... but if you exert your authority and make them work, you will like them when you find that they are profitable to you, and they will be fond of you when they feel that you are pleased with them."

The patriarchal decision is clear and the social reasons for the solution. However, we don't know how the women reacted.

The socratic method of dialogue is also exemplified in his advice to Euthydemus (the handsome one) whose pride led him to assume that he was wise because he had collected the works of famous poets and philosophers. This is based on a dialogue in which Socrates leads his interlocutor to reflect on his own assumptions. The guiding line is to achieve the Delphic ideal: "Know thyself."

"Isn't it clear, too, that through self-knowledge men come to much good, and through self-deception to much harm ? For those who know themselves, know what things are expedient for themselves and discern their own powers and limitations."

Xenophon offers several examples of the socratic approach to encouraging his conversationalists to reflect on their own assumptions.

However in Memorabilia Socrates's mostly rhetorical questions usually only have one answer and so debate is excluded. The final word is always left to the interrogating philosopher himself since, in Xenophon's version, nobody dares challenge him. Socrates' belief in absolutes might appeal in cases of truth and justice but the lack of debate in Xenophon's rendition is limiting.

There is a certain socratic conservatism in the philosopher presented by Xenophon. His beliefs are too solid and unchanging. He is open to learning but no new ideas shake the foundatons of what he already believes. He is shown as set in his ways with a surprising absence of curiosity on many questions of science and with an overdeference to the gods. His interlocutors always find the 'right' answer to the master's questions and that might appear unconvincing to the reader. It also presents a portrait of Socrates as presumptuous.