- Jesus of Nazareth by the 4 Evangelists 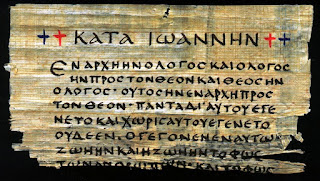 The world of the early Christians was Hellenistic and thus the evangelical tradition that tells us about Jesus of Nazareth is highly influenced by Greek philosophy. Palestine was an integral part of the empire and could not escape Greek influence. All the texts that we have of the New Testament are written in koiné, the lingua franca of the Hellenistic empire. This does not mean that the writers of these texts were determined in their thinking by Hellenism. However, their expectations, problems, and responses were shaped under Greek cultural influence. The mixture of Greek thought with Hebraic religiosity is evident in the Prologue to the Gospel of John with its abstract references to the Logos but its Hebrew religious spirit. Greek philosophy has influenced the way Christianity discusses theology. It has not, however, been the origin of Christian belief nor a source of Christian religious ideas. It influenced how Christian beliefs were expressed, not what they said. It is still curious, however, to reflect on the fact that the two pillars of Western culture, Judeo-Christianity and the Greek tradition, were already mixed in the New Testament, the Western reference book.

The gospel of Matthew was an anonymous text which circulated until the second century A.D. when it received its present name. It was composed around 85-90 in Antioch, Syria. Mark's gospel is an interpretation of Peter's teachings and was written around the year 70 in Syria or Rome. Luke and the Acts are a unit and were composed by an anonymous Christian circa 80-125. The gospel of John has an unknown author and may have been composed around the year 90. They are all narratives based on memories or traditions about Jesus' teachings.

Jesus in the gospel of Matthew

It was in the second century that this text was placed at the beginning of the New Testament though it dates from the years 80 or 90. It concerns itself with presenting the relationship of Jesus to the Jewish tradition of the Old Testament and strives to demonstrate that he is the awaited messiah, a new Moses.

It is structured in seven parts >

- The introductory is the miraculous birth story and the beginning of the ministry,

- The conclusion is the narration of the Last Supper, the trial, crucifixion and resurrection.

This gospel presents Jesus as the new Moses who fulfils all the Old Testament prophecies. Like Moses the young Jesus hides in Egypt from an envious king. Just as Moses brought the tablets of the law down from Mount Sinai Jesus preaches his new law in the Sermon on the Mount: both wandered in the wilderness for a period of 40: Moses in years, Jesus in days. Jesus is also linked to Abraham, father of the Jews. However, he also criticised tradition Jewish teaching by demanding obedience to the spirit, not the letter of the law. “You have heard that it was said ‘You shall love your neighbour and hate your enemy.’ But I say to you, Love your enemies and pray for those who persecute you” (5/43).

Jesus in the gospel of Mark

This text is divisible into two parts:

- Jesus predicts his own crucifixion and resurrection. (8/27- end)

Mark's gospel is full of secrets about the kingdom of God, riddles in the miracles, the imminent end of the world and misunderstanding by the apostles. In the end Jesus appears to his disciples who begin their missionary work. “And they went out and proclaimed the good news everywhere, while the Lord worked with them and confirmed the message by the signs that accompanied it.” (16/20).

Jesus in the gospel of Luke

Luke's gospel narrates the birth, ministry, death and resurrection of Jesus. In the Lucan genealogy of Jesus his parentage is traced back to Abraham, symbol of Old Testament universality. This emphasis on the inclusive human side and the fewer references to the Old Testament tradition probably means that the gospel was directed to a non-Jewish audience.

- The first section of the text, up to chapter 8, relies on the healing stories of Mark and emulates Matthew's story of the Sermon on the Mount. Chapters 7 and 8 introduce specifically Lucan material on Gentile faith and the role of women.

- The next part of Luke deals with the journey to Jerusalem (chapters 9-14) and subsequent crucifixion, resurrection and ascension. This section contains parables only told in Luke: the Good Samaritan, Mary and Martha, the mustard seed and the rich fool.

- Chapter 15 narrates three parables about loss: the lost sheep, the lost coin and the prodigal son. The lost are returned to welcoming arms and reinserted in their rightful places.

“Sovereign Lord, as you have promised, you may now dismiss your servant in peace. For my eyes have seen your salvation, which you have prepared in the sight of all nations: a light for revelation to the Gentiles, and the glory of your people Israel.”

Quotations from Isaiah and calls from John the Baptist emphasis this vision of Jesus as the saving messiah. The healing miracle stories in Luke also underline the concept of Jesus as saviour. The blind see salvation, sins are forgiven and the oppressed hear the good news. Jesus is also the Son of Man meaning the divine one who has come to redeem that which was lost in Eden.

Jesus in the gospel of John

This text is concerned with revealing the mysterious divine identity of Jesus. It does include his ministry, miracles, death and resurrection, however they are both related and interpreted here.

John is structured in this way >

- A Prologue presenting an overview and the essential point of the gospel: the Incarnation.

- The first part concerns the 7 important miracles and their meaning.

- The second part relates Jesus' glorification through the crucifixion and resurrection.

- The epilogue was probably added by a redactor and narrates the post-resurrection appearances.

The Prologue is a poetic hymn which relates Jesus' origin, mission and place in the divine scheme. He is presented as a new beginning, , the incarnate word mirroring the creation by word in Genesis 1 and also the replacement of Moses' law.

The Book of Signs is the first narrative section which starts with John the Baptist's fulfilment of Isaiah's prophecy to prepare the way. On hearing the Baptist's prophecy two disciples decide to follow Jesus. The missionary work then starts in Judea. The miracles worked are not magic actions for John but interpreted as signs of divine presence. The author uses the anecdote of the Samaritan woman at the well for Jesus to elaborate on his gift of everlasting life symbolised by water, words, bread and light.

The Book of Glory is the second section of John's gospel. The resurrected Jesus appears to Mary Magdalene and identifies himself. He then presents himself to his apostles and breathes his spirit on them. In these stories John emphasises the personal relationships with people, not the social structure of a church.

This gospel develops an interpretation of the nature and origin of Jesus. It omits references to the conception and birth and concentrates on his dual divine/human nature. His followers will attain insight into this mystery through faith because the final message is not 'seeing is believing' but 'believing is seeing' :

"Jesus performed many other signs in the presence of his disciples, which are not recorded in this book. But these are written that you may believe that Jesus is the Messiah, the Son of God, and that by believing you may have life in his name." (John 20/30-31)

Jesus as fulfilment of the Old Testament

The gospel of Matthew was written for a Jewish audience and emphasises the link between the Old and New Testaments to convince them that Jesus is the promised Messiah. Jesus is portrayed as someone reliving the experience of Israel. This gospel makes Jesus comprehensible to its readers and listeners through referring his actions to Old Testament prophesies. The other gospels refer briefly to Old Testament links but Mark emphasises the apostles' misunderstandings of Jesus' identity, Luke focuses on Jesus as universal saviour for his Gentile audience and John highlights his identity as divine and human nature.

Jesus brings a new message of salvation for sinners who are reflected in the miracles such as the diseased, widowed, orphaned, ostracised and marginalised. The good news (in Old English godspell) is that the 'poor' will enter the kingdom of heaven. This is a theological rather than an economic reference and recalls the Old Testament's repeated concept of the 'anawim' the 'poor ones' who remain faithful to God in times of difficulties. It is the spiritual attitude that the gospel of Luke described in the Good Samaritan story and in Matthew's first beatitude : “Blessed are the poor in spirit, for theirs is the Kingdom of heaven." (Mt 5,3)