We could say that western philosophy and science began on the islands of Miletus and Samos, near the Anatolian coast, with a new Greek vision. This has shaped European thought.

Greek culture traditionally had conceived humans as puppets in the hands of the gods. At the time of the Persian invasion of the Aegean islands in 547 B.C. philosophers, probably highly influenced by Persian ideas, began to speculate on the composition of the universe, the geometry of nature, the role of humanity and the existence of the gods. The novelty of their perception was that humans were independent of the gods and could project their world without them. The Greeks were also original in their belief that the universe formed a harmonic unit, what they called Cosmos. This implied the concept of the universe as a system that could be analysed and understood. This was the scientific vision that established the foundations of our western perception of the universe.

Starting on the island of Miletus with Thales, his student Anaximander and his student Anaximenes, three basic questions were asked about Nature : its substance, its diversity and its maintenance. The answers were sought, not from the heavens as had been traditional, but from rational thought and the analysis of empirical data.

This quest for a first cause (arche in Greek) inspired the 6th century presocratic philosophers. No longer hidden within the creation myths of a world of gods, binary was grasped as the code governing the existence of the real world. As such, it became the conscious object of rational analysis. Milesian philosophy in general was based on a binary law which postulates existence: objects either fully exist as completely identical to themselves or do not exist at all.

Heraclitus, living in Ephesus within the Persian empire, was influenced by this train of thought to write his treatise On Nature (circa 500 BC) of which only fragments have survived quoted by other authors. He argued that existence can be both off and on. There are two states, 0 or 1, as in today's computer binary encoding. He also suggested an everlasting Word or Logos in which Nature, the human and the divine are unified.

'The way up and the way down are one and the same.'   Heraclitus

(This completed the schema later enunciated by Hegel > thesis > antithesis > synthesis. This 19th century philosopher would dedicate his life to showing us how this dialectic shapes human consciousness and thought, religious beliefs, human social relations, the state, philosophy and the structure of Being itself.)

According to Heraclitus the Cosmos is comprehensible since it is ordered through logos, a rational structure and so we can understand it through reason. It mirrors the divine logos which inhabits our souls and is akin to reason. The author links reasoning with observation in order to understand the world since one without the other is useless. This means that the logos is his synthesis between reason and experience.

Heraclitus argued that empiricism should be tempered with rational thought. Observation is important but reasoning allows the observer to look beyond the material data. His paradoxes appear difficult to interpret but they become comprehensible when related to the logos.

Though Heraclitus recognises that we all have our own logos individual which allows us to make sense of our experience, he also admits that most people do not recognise it. These people are the sleepers who cannot understand the world because they cannot receive information from it due to not comprehending their own logos. According to the author it is like being a barbarian who does not understand Greek so that all he hears are noises but cannot understand the meaning. Similarly the logos is the language of nature and observing it is just noise. Facts must be related to the logos in order to understand them.

" 1 It is wise for those who hear, not me, but the universal Reason, to confess that all things are one.

2 To this universal Reason which I unfold, although it always exists, men make themselves insensible, both before they have heard it and when they have heard it for the first time. For notwithstanding that all things happen according to this Reason, men act as though they had never had any experience in regard to it when they attempt such words and works as I am now relating, describing each thing according to its nature and explaining how it is ordered. And some men are as ignorant of what they do when awake as they are forgetful of what they do when asleep.

3 Those who hear and do not understand are like the deaf. Of them the proverb says: "Present, they are absent."

4 Eyes and ears are bad witnesses to men having rude souls.

5 The majority of people have no understanding of the things with which they daily meet, nor, when instructed, do they have any right knowledge of them, although to themselves they seem to have.

6 They understand neither how to hear nor how to speak." (Heraclitus: Fragments)

- All Things are One

Heraclitus starts from an supposition > that the Cosmos is a unity. Just as his contemporaries sought the basic substance of the physis, the physical world, and came up with different answers such as water, numbers or air, Heraclitus appears to see fire as the fundamental substance of Nature. For him it is the principle of wisdom and the material sign of the logos. On the other hand fire could be simply a metaphor for the logos rather than its material manifestation.

The concept of unity in the Fragments is also presented as paradoxical opposites. For example sea water is both undrinkable for humans and forms the living conditions for fish. The road up and the down road are the same, just as night and day cannot exist one without the other. God (the logos) is simultaneously summer and winter, war and peace, hunger and filling. It is this identity of binary opposites that the author means when he says they are united in the logos. It is this divine law of nature that maintains unity despite diversity. This is why we must understand the logos if we want to make sense of our experience. Logos is the unity of an apparent conflict of opposites. 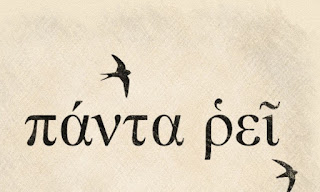 (panta rei > Everything flows)
The Pre-socratics all believed in a natural equilibrium in the Cosmos. Unlike others Heraclitus thinks that this balance is a state of constant flux. The metaphor of fire fits this concept well because it constantly changes. In the same way, the metaphor of the river suits him since both the Cosmos and running water are never the same though appear the same. The Danube is still the Danube though its waters are never the same >

"One cannot step into the same river twice,
nor can one grasp any mortal substance in a stable condition,

it scatters and again gathers,

it forms and dissolves,

Anaximander saw occasional conflict in the Cosmos then a return to balance through justice. Heraclitus, however, was of the opinion that strife between opposites was the universal norm which continued endlessly. He thought that justice and equilibrium owed their existence to conflict. Anaximander saw oppositions as abnormal with the need to be rectified by justice. Heraclitus viewed change and strife as the norm.

"We must recognize that war is common, strife is justice, and all things happen according to strife and necessity." (Fragments)