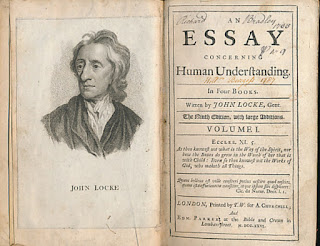 17th. century UK was convulsed by clashes in politics between Parliament and the monarchy, in religion between Catholics and Protestants and in science between Aristotelianism and mechanical motion. Locke wrote in favour of synthesis through religious toleration, rule by contract with the separation of powers and the contemporary mechanistic science.

The author presented the fundamental principles of his epistemology in An Essay on Human Understanding (1690). He argued for empiricism: all our ideas, simple and complex, are based on our experience and sensory stimuli. Our knowledge is, then, severely limited in scope and certainty. We cannot know the inner nature of things, only their behaviour and the way it affects us. It is a modified scepticism.

However, it does not mean that everything is unreal. Locke already distinguished between 'primary' and 'secondary' qualities of reality. The primary qualities of an object, such as the solidity and occupation of space exist independently of the perceiver. The secondary ones, like the colour, differ according to what he perceives. For example, if we jump in front of a red bus whose primary qualities are solid and take up space, it will cause injury and possibly death. The way the bus appears to us is a controlled hallucination; the bus itself is not.

Locke published his Two Treatises on Civil Government (1690) anonymously to avoid controversy. The first presented arguments against the divine right of kings (root cause of the civil war of the 1640s). The second treaty supported Hobbes' 'social contract' by underlining majority rule. However, unlike Hobbes Locke ruled out absolute power and supported the separation of powers.

Book 1 "Of Innate Ideas", attacks the Platonic and Cartesian idea of knowledge that humans start life with innate knowledge. Locke sustains that the mind is a tabula rasa at birth > "Let us suppose the mind to be, as we say, white paper, void of all characters." He then insists in his empirical philosophy that knowledge comes from teaching and learning from experience. His goals are to discover where our ideas come from, to examine faith and opinion and to set out a reasoned path for deciding when knowledge is limited.

"For I imagine anyone would easily grant, that it would be impertinent to suppose, the ideas of colours innate in a creature, to whom God had given sight, and a power to receive them by the eyes from external objects: and no less unreasonable would it be to attribute several truths, to the impressions of nature, and innate characters, when we may observe in ourselves faculties, fit to attain as easy and certain knowledge of them, as if they were originally imprinted on the mind."

In Book 2 Locke argues that our ideas come through experience. They arrive by two routes : through the senses and through reflexion. He classifies ideas into two types : simple and complex, the complex ones being built on the simple ones. Further classification analyses subcategories of ideas. It is in Chapter 8 that he explains the different qualities of our relationship with the outside world. Our senses capture the primary qualities of size and shape but our ideas of secondary qualities (colour, odour etc...) are a mismatch. Nothing in the outside world is exactly captured in our sensations.

"Pound an almond and the clear white colour will be altered to a dirty one and the sweet taste into an oily one. What real alteration can the beating of a pestle make in any body, but an alteration of the texture of it?"

Book 3, "Of Words", deals with language. Words, for Locke, refer to internal ideas not to the external world. This leads to a long discussion of whether classifications are conventional or natural. Locke remains unconvinced that names mirror the real essence of things.

"Thus we may conceive how words, which were by nature so well adapted to that purpose, came to be made use of by men, as the signs of their ideas."

Words refer to mental conceptions not to external objects. The word "gold" is not a reference to the metal but to an idea of that metal you have in your mind. His thought experiment on this word exemplifies the different essence and qualities when the same word is used by a child, an adult and a chemist.

Book 4, "Of Knowledge and Opinion", offers his theory of knowledge which amounts to certainty beyond a doubt. To qualify other views he uses the word "probability". (This is strikingly similar to the modern Quantum Mechanics theory.) Knowledge, for Locke, is the perception of strong internal relationships among internal ideas. There are four relationships between ideas that are considered knowledge: identity/diversity, relation, coexistence, existence. There are also three grades of knowledge: intuition is highest, demonstration is middling, sensitive is pseudo-knowledge. He concludes that belief or opinion is the best we can expect from our thinking and we must be conscious that our opinions will never reach the level of Knowledge. He is not a sceptic and believes that science is useful and underlines that reason is the way to truth. However, he argues that humanity is also overoptimistic about what it can achieve since he believes that the human capacity for knowledge is limited.

"Our knowledge in all these enquiries reaches very little farther than our experience."

The research he refers to includes all of natural science and his belief in our limitations derives from his strict definition of knowledge. Certainty for Locke is only achieved if we can predict with absolute certitude that B will follow from A. If not, we are left with opinion or belief.

Locke's theory of power is that the natural power of each person forms the political power and that government is a social pact. He has a similar position to Hobbes on government believing that society gives up part of its natural power to governors in exchange for better protection. However governments which break the pact should be replaced and in fact society has a moral duty to revolt against governments which do not benefit their people. This social pact was based on God's gift of reason and so proper government is fulfilment of the divine purpose of moral order.

For Locke we come to know through experience. At birth our minds are tabula rasa and we fill our minds through experience using the five senses. Knowledge comes from the connection of our ideas which implies that we make models of the world but do not know it. We only know our ideas. Even though we have limited knowledge some things are certain. We know of our own existence, intuitively, though we can't know the essence of our souls. We also know that God exists though we cannot fully grasp the divine essence. We also know that our ideas come from realities since we know them through experience.

Locke argues that God's gift of reason is to help us in searching for truth. Nobody is better able to discover truth than another so politicians have no right to impose their beliefs. Subjects should not follow their governments blindly since that would be a surrender of their reason and so violate natural law (God's law).

Humans have a right to self-preservation and so they have a right to help themselves survive through the possession of natural resources. When humans transform these resources they become their owners and the farmer who works the land and produces food is the owner of both. The limitation to this ownership is if it harms another person or if the owner wastes resources by taking over too many and depriving others. (This appears to be a reference to the recent feudal order.) The social pact will bring the community together, enforce laws and afford protection of property and freedoms.

The Nature of Man

Locke believes that the natural state of every human is freedom and he argues from this that people are equal. However, government is necessary but only in order to preserve as much as possible the personal natural states of freedom and equality.

Any form of government will tend to curtail the freedom and equality of its people. The legitimate government is that which uses its authority justly and it is the governed who have the right to decide what is just and what not, that is, rule by consent. This implies that the absolute monarchs of his time, The Stuarts, who were restored to power in 1660, were not legitimate leaders. Absolute monarchy was finally abolished in Britain in 1688.

Locke argued against Rober Filmer's biblical justification for absolutism. Filmer argues that some are born more equal than others and Locke sees this as a denial of equality. This led to efforts to separate the church interests from those of the State. However the British Constitution still recognises the Sovereign as head of the Church of England and the Church of Scotland.