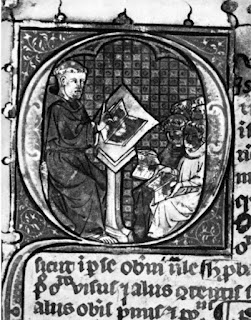 From 1100–1500 philosophical thinking in medieval universities was characterised by scholasticism. It arose out of the texts the Arab invasion brought to the Iberian peninsula and its objective was to reconcile the ancient classical philosophers with Christian theology. Scholaticism was not a philosophy in itself but a tool for learning which relied on dialectical reasoning. It was a combination of religious doctrine, the ideas of the Church fathers and philosophical and logical analysis based on Aristotle and his commentators.

Some themes from Plato were also included. This was a continuation of the Patristic tradition's emphasis on platonic thinking which had been the dominant influence on the Fathers of the Church. It used reason to support revelation and relied on spiritual intuition to establish the truths which became dogma in the Church.

Aristotelianism and Platonism represented two traditionally different approaches to the search for truth, one more rational and inductive, the other tending to mysticism and deductive thinking. During the eleventh and twelfth centuries conflict arose between rationalists such as Roscelin, Abelard, and Peter Lombard, and Christian mystics such as St. Anselm, St. Peter Damian, St. Bernard, and the Victorines, who felt that they were threatening the Christian faith. Gradually the rationalists reconciled their scholastic methods with the orthodoxy of the Church and accommodated the mysteries of faith.

By the end of the twelfth century, rationalism was dominant in the Christian universities, but coexisted with mysticism. The leading scholastics were Thomas Aquinas, Jean Buridan, Duns Scotus, and William Ockham.

In the XIV century theological debate heightened between the Franciscans, led by Duns Scotus (c. 1265–1308) following Augustine of Hippo, and the Dominicans led by Thomas Aquinas (1225–1274). Duns Scotus criticised the Dominicans and developed a new form of Scholasticism, Scotism, which gave primacy to the will over the intellect.

Aquinas and Scotus offered answers to the principal question of the day: how much can we learn about God? Both philosophers took an empirical approach to the question by using reason to answer it and saying that revelation was not necessary. Aquinas maintained that we have confused knowledge of the Divinity; Scotus affirmed that our knowledge of God is accurate.

Aquinas and Scotus disagreed over how we can know the nature of God. Aquinas argued that we can only guess about God through analogy with humans. When we talk of goodness God's goodness can be understood through goodness in humanity, but only analogically. Both goodness are essentially different. Scotus argued that goodness in both God and humans refers to a common concept of being in both Beings. However their modes are different: God's is infinite; humanity's is finite.

Perhaps the difference between the two philosophers comes down to their point of departure. Aquinas argues from essence in a platonic model; Scotus debates from existence following an aristotelian pattern.

The Four Books of Sentences (Libri Quattuor Sententiarum) is a book of theology written by Peter Lombard in the 12th century. It is a systematic compilation of theology which derives its name from the sententiae or authoritative statements on biblical passages that it gathered together. It is not a synopsis but a compilation of sources for further discussion.

Every master of theology had to write a commentary on the Sentences so as to apply for the status of bachelor in theology. Scotus passed this exam and became professor of theology first at Oxford then in Paris where he commented on the Sentences as part of his teaching. This is one source of information on Scotus' thinking. Another provenance is the Ordinatio in which Scotus arranges his own commentaries on the Sentences into a theological compendium.

"Nothing however is more perfect than a being having necessary existence of itself."

Scotus posits that there exists a first efficient cause and that effects are produced by a cause other than themselves. Through a series of arguments he arrives at the conclusion that there must be a first cause caused by a first agent. He then argues that a being who is pre-eminently causal will have intellect and will be finite and unique.

(Ockham (c.1280—c.1349) maintained that belief in God is a matter of faith rather than knowledge. He insisted that theology was not a science and rejected all proofs of the existence of God.)

" 'Being' cannot be explained by anything better known than itself. "Infinite" we understand by means of finite. I explain "infinite" in a popular definition as follows: The infinite is that which exceeds the finite, not exactly by reason of any finite measure, but in excess of any measure that could be assigned."

Aquinas affirms the Divinity's simplicity. (The principle of simplicity is also the central tool of Ockham’s approach: the simpler theory is more likely to be true.)

However as there is no language to capture divine simplicity there is an obstacle to describing God's nature which is the main aim. Scotus argues for God's infinity which, he states, is ontologically central to the divine nature and also its best descriptor. Univocity means is that you can know what it is to affirm something only if you know what would count as its negation. In practice the syllogistic argument would follow the statement: If the divinity is infinite and God is infinite then God is the divinity. It is valid since the middle term 'infinite' has the same sense when related to the two extremes.

The importance for Scotus of the concept of 'infinite being' is that it contains all other infinite perfections of the Divinity. It is both a simple concept and a fruitful descriptor.

"As for the object of the science in this sense, we have indicated above that this science is about the transcendentals. And it was shown to be about the highest causes. But there are various opinions about which of these ought to be considered its proper object or subject. Therefore, we inquire about the first. Is the proper subject of metaphysics being as being, as Avicenna claims, or God and the Intelligences, as the Commentator, Averroes, assumes."

For Scotus metaphysics is about 'being as being'. He further defines it as real, theoretical and a science. Its reality lies in its interest in things rather than concepts. It is theoretical since it is studied for it's own sake not for guiding action or making things. He calls it a science since it proceeds deductively from principles to conclusions. Its study is 'being' itself.

In this study of 'being' Scotus analysed it into transcendentals which mark the division between the finite and the infinite. The finite are then subdivided into the 10 aristotelian categories. The first of these is substance which is independent in that it does not exist in something else. The other 9 categories are accidents since they exist in substances. They are: quantity, quality, relation, action, passion, place, time, position and state.

However Scotus embraces 3 theses on matter and form which distinguish him from his contemporaries:

- Matter can exist without form. Though matter is usually created through form the Divinity has the power to create matter without form: "prime matter".

- Not all created substances are made up of matter and form. Bonaventure argued that even angels could not be immaterial but are compounds of spiritual matter and form since matter is potentiality and form is actuality. Only God is pure actuality. However Scotus affirmed that "prime matter" could be actual without form and that an immaterial Being could also have potentiality.

- The same substance can have more than one substantial form. The logic behind this affirmation is that Aquinas and others argued that the soul is the only substantial form of the human being. This means that when the body dies and the soul stops informing its physicality there would appear a new substance since what made it that body was its substantial form, the soul. For Scotus this conclusion is due to a metaphysical incongruity.

To solve the metaphysical problem. Scotus posited a plurality of substantial forms. These were a body form which defines the organism and an animating form, the soul, which makes the body alive. At death the soul stops animating the body which finally decomposes. Scotus goes further by treating each organ of the body as a substance.

The suggestion behind Scotus' logic is that the soul survives the body's death and lives on as an immaterial substance. However, after investigating a number of philosophical arguments in this sense he concludes that this is only knowable through faith.

This is the question of how far we can generalise on individuals. Realists think that there exist universals outside the mind; Nominalists, like Ockham, deny extra-mental universals. Scotus was a realist concerning universals. This raises two questions: What are the universals: natura communis? and How do we explain the principle of individuation: haecceitas.

Natura communis is indifferent to its existence in individuals. It exists outside the mind in particular things through haecceitas. The natural communis of humans exists in Peter and Mary and is made individual in each person through their particular haecceitas. Their individual humanities are unrepeatable, their humanity is common and repeatable and is ontologically previous to individualistion.

"There are two senses in which things are said to be maximally knowable: either [1] because they are the ﬁrst of all things known and without them nothing else can be known; or [2] because they are what are known most certainly. In either way, however, this science is about the most knowable."

Following Aristotle matter and immateriality are also applied to knowing by the medieval philosophers. Human are believed to have two cognitive powers: the sensory system and the intellect. The senses have physical organs and the intellect is immaterial. The intellect makes use of incoming sensory information by taking the raw sensory material and transforming it into intelligible material. The process is called abstraction. Once received and processed by the active intellect the sensory experience material (phantasms) is stored in the receptive intellect. In order to reproduce the stored memories Scotus insists that there must be a sensory context for any act of intellectual cognition. However in the afterlife we will not need phantasms to comprehend.

Intuitive cognition has two inputs: sensible external objects and the soul's own acts. Extramental objects are known to us through concepts which form intellectual cognition. However the input is sensory and that is why Scotus refuses to admit knowledge of non-sensible inputs, like angels, in this life. Self-knowledge is also intuitive in the sense that it involves thinking about thinking, the heart of epistemology.

(Ockham defended direct empiricism, according to which human beings perceive objects through “intuitive cognition,” without the help of any innate ideas.)

Scotus argues that scepticism is demonstrably false. He names four kinds of knowledge where infallibility is possible. Knowledge of first principles is sure because they are formed by the intellect. Many causal judgement derived from experience are certain. Many of our acts are as certain as first principles. Some propositions about direct sense experience are known with certainty.

The rivalry between the Franciscan school with Scotus and the Dominicans with Aquinas absorbed Scholasticism in philosophical disputes. This concentration may be one of the reasons why this movement failed to adapt itself to the incipient evolution of scientific ideas in the modern era.

Scholasticism's dominance of western philosophy was replaced by humanism, rationalism and empiricism from the Renaissance onwards.