- The Philosophy of World History by Hegel 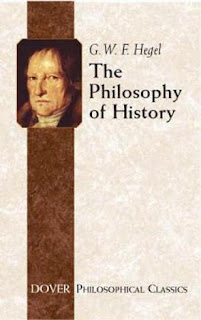 Context
The evident advances of science stimulated the philosophers of the period to found their theories on solid ground. Some like Bentham, Marx, and Engels based them on social transformation, others, like Fichte, Mill, and Ayer on an empirical approach to philosophy; others, like Hegel, on philosophical systematization.
A majority like Husserl, Kierkegaard, Nietzsche, Russell, Wittgenstein, Heidegger and Schopenhauer were in favour of a skeptical approach as a starting point. All were looking for certainties but most found themselves facing a question of identity .
Georg Wilhelm Friedrich Hegel (1770 -1831) lived through several political upheavals: The American Revolution, the French Revolution and the Naploeonic Wars. The Philosophy of World History purports to demonstrate that these historic disruptive changes make sense in a rational progression toward true human freedom. It is the groundwork for his basic concept that reason rules history.
The most significant political event of his time was the French Revolution. At first Hegel was an advocate but the destructive turn of the revolution saw him criticise its concept of freedom. Hegel grew suspicious of all efforts to invent a new world from scratch without taking into account the way the world already is. However much the world needs improvement, he argued, reform should take a more gradual course. He did express great admiration for Napoleon, however.
The significant philosophical event of the time was the “Pantheism Controversy.” A century earlier Spinoza had argued that there existed only one self-enclosed, self-determined, and self-sufficient substance and nothing else. This substance was identical with the world as we know it, but it was also identical with God. Spinozism was accused by his contemporaries of being a form of atheism, and more importantly, of excluding any space for human freedom. This intellectual event left a mark on the next generation, which saw as its task to reconcile Spinoza with Kant, who was then regarded as a champion of freedom. Hegel understood his own project as the solution to this problem: he described it as an effort to unify “substance” and “subject”, and its freedom.

"The History of the World is nothing but the development of the Idea of Freedom."

The Philosophy of World History was originally composed for lectures at the University of Berlin in 1822, 1828, and 1830. The text was first published in 1837, after Hegel's death from cholera in 1831. It presents world history in terms of the Hegelian philosophy to show that history follows the dictates of reason and that the natural progress of history is due to the workings of Absolute Spirit.

"Spirit is the “nature” of individuals, their immediate substance, and its movement and necessity; it is as much the personal consciousness in their existence as it is their pure consciousness, their life, their actuality."

Much of Hegel's work is spent defining and characterizing Geist or spirit. The Geist is similar to the culture of people, and is constantly reworking itself to keep up with the changes of society, while at the same time striving to produce those changes through what Hegel called the "cunning of reason". In the lectures, Hegel claims that cultural awareness of Geist originated in ancient Judaism; he thus ties his history of Geist to a narrative of disenchantment and a decline in pagan polytheism. Another important theme of the text is the focus on world history, rather than regional or state history. Thinkers such as Johann Gottfried Herder (1744–1803) and Johann Gottlieb Fichte (1762–1814) had written on the concept and importance of world history and nationalism, and Hegel's philosophy continues this trend, while breaking away from an emphasis on nationalism and striving rather to grasp the full sweep of human cultural and intellectual history as a manifestation of spirit.
Theodicy
Hegel explicitly presents his lectures on the philosophy of history as a theodicy, or a reconciliation of divine providence with the evils of history. This leads Hegel to consider the events of history in terms of universal reason:

"That world history is governed by an ultimate design, that it is a rational process... this is a proposition whose truth we must assume; its proof lies in the study of world history itself, which is the image and enactment of reason."

The ultimate design of the world is such that Absolute Spirit, understood as God, comes to know itself and fully become itself in and through the triumphs and tragedies of history. Hegel is clear that history does not produce happiness and yet the aims of reason are accomplished:

"we must first of all know what the ultimate design of the world really is, and secondly, we must see that this design has been realized and that evil has not been able to maintain a position of equality beside it."

To see reason in history is to be able to account for the evil within it. He argued against the professional historians of the day such as Ranke. Hegel points out that the understanding and consequently writing of history always relies on a framework. Hegel chose to openly admit and explain his framework.
History
According to Hegel,

"World history... represents the development of the spirit's consciousness of its own freedom and of the consequent realization of this freedom."

This realization is seen by studying the various cultures that have developed over millennia, and trying to understand the way that freedom has worked itself out through them. Hegel's account of history begins with ancient cultures as he understood them. His account of the civilizations relied upon 19th century European scholarship, and contains an unavoidable Eurocentric bias. At the same time, the developmental nature of Hegel's philosophy meant that rather than simply deprecating ancient civilizations and non-European cultures, he saw them as necessary steps, though incomplete or underdeveloped, in the workings of absolute spirit. Hegel's lectures on the philosophy of history contain one of his most well-known and controversial claims about the notion of freedom:

"World history is the record of the spirit's efforts to attain knowledge of what it is in itself. The Orientals do not know that the spirit or man as such are free in themselves. And because they do not know that, they are not themselves free. They only know that One is free.... The consciousness of freedom first awoke among the Greeks, and they were accordingly free; but, like the Romans, they only knew that Some, and not all men as such, are free.... The Germanic nations, with the rise of Christianity, were the first to realize that All men are by nature free, and that freedom of spirit is his very essence."

In other words, Hegel maintains that the consciousness of freedom in history moves from despotism, to a sense that freedom is a privilege of a few, to a robust notion that humanity is free in and of itself. Hegel believes that the spirit of human freedom is best nurtured within a constitutional monarchy in which the monarch embodies the spirit and desires of the governed, and his reading of history locates the rise of such forms of government in the Germanic nations of, for example, the United Kingdom and Prussia after the Protestant Reformation.
Hegel follows a basic geographical metaphor throughout his philosophy of history: "World history travels from east to west; for Europe is the absolute end of history, just as Asia is the beginning." When referring to the east, Hegel generally has in mind the historical cultures of Persia, though at times he does reference China and spends a great deal of space discussing India and Indian religions. However he also said that the view of history (including his own) should be open to change based on the empirical facts available.
Email ThisBlogThis!Share to TwitterShare to FacebookShare to Pinterest