- The Iliad by Homer 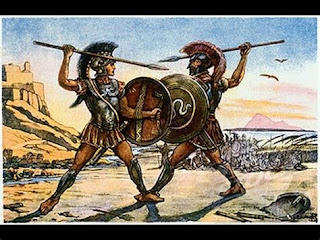 Homer's narratives represent a renaissance of Greek culture in the 8th century BC after the Dark Ages which lasted from 1100 to 900 B.C. These tales from Greek mythology were a revival of Greek cultural traditions and self-identity.

The first ideological opposition can be traced to the homeric poems, The Iliad  and The Odyssey, dated before the VII century B.C. The Illiad  recounts the relationships between the human and the divine represented by Achilles. It tells the tale of divine interventions and manipulation of human lives. It is a story based on a vertical view of the world where the gods are puppeteers of humanity.

The Trojan War was in its ninth year when the Mycenean army sacked a town allied with their enemy, Troy. Two beautiful maidens were captured from the town and given to the Mycenean king, Agamemnon and the warrior Achilles. One of the sequestered maiden's father, Chryses, a priest of Apollo, offered a ransom but Agamemnon refused to return her. Chryses then appeals to Apollo who sends a plague on the Mycean army.

The plague kills many Myceneans and Agamemnon is forced to consult a prophet to find out the cause of the plague. Learning that the kidnapping of Chryses' daughter is the reason he returns her to her father. However, he demands that Achilles give him his captive maiden. Achilles' first response is to think of killing King Agamemnon but Athena intervenes to prevent this since it would conflict with the Natural Law that kingship is sacred. So Achilles bows to the king's demands but is outraged and refuses to continue to fight in the war. In Book 9 He ponders whether to return home following the prophecy that he could either remain in Troy and kill Hector only to die shortly thereafter, or instead, return home to a long but forgotten life :

"Cattle and fat sheep can all be had for the raiding,

tripods all for the trading, and tawny-headed stallions.

But a man’s life breath cannot come back again—

the immortal goddess Thetis with her glistening feet,

that two fates bear me on to the day of death.

If I hold out here and I lay siege to Troy,

my journey home is gone, but my glory never dies.

If I voyage back to the fatherland I love,

Achilles chooses a glorious and memorable death over a long but forgotten life at home. Meanwhile as revenge he asks his mother, the sea nymph Thetis, to plead with Zeus to turn the war against the Myceneans.

There is a cease-fire between the feuding sides in the war but now, with Zeus at their side they break the truce. This turns the tide in favour of the Trojans despite duels between Paris and Menelaus and Hector and Ajax and heroic efforts by Diomedes. The Myceneans take refuge behind the protective wall guarding their ships but the Trojans break through and set fire to one of the ships. If the fleet were destroyed there would be no escape for the Myceneans and so the situation is desperate.

Achilles still refuses to fight but lends Patrocus his armour to wear in the counterattack. But this fails when Apollo knocks Patrocus down and Hector kills him. A fight for his special armour ensues which is carried away by Hector but Menelaus manages to recover Patrocus' body and return with it to the Mycenean camp. On discovering that Patrocus is dead Achilles is furious and decides to rejoin Agamemnon's forces in the war. His mother, Thetis, asks the blacksmith god Hephaestus to make him a new suit of armour and the next morning he leads the Mycenean army to battle.

The Trojan army is camped outside the walls but flee in terror when they see Achilles leading the attack. The hero slays every Trojan he sees and even has an encounter with Xanthus, the river god, who complains of so many corpse in his stream. Hector and Achilles meet outside the Trojan walls and Achilles chases him round the walls three times but Athena tricks Hector into stopping to fight his pursuer. In the duel Hector is killed and Achilles drags his body back to the Mycenean camp. The army celebrate Patroclus' funeral by staging athletic games in his honour and Hector's body is paraded round the funeral bier for nine days.

The gods intervene to give Hector a proper funeral and Hermes brings King Prim, Hector's father, to the Mycenean camp. He pleads with Achilles to allow a decent burial for Hector and finally Achilles hands over the corpse to the Trojans. There is a truce and Hector is given a hero's funeral.

The first word in the poem is a summary of its content: "Rage".

Black and murderous, that cost the Greeks

Of heroes into Hades' dark,

And left their bodies to rot as feasts

For dogs and birds, as Zeus' will was done.

Begin with the clash between Agamemnon--

The wrath of Achilles is stirred in the first book by Agamemnon's imposition of choice when he demands that Achilles hand over his kidnapped maiden. Agamemnon is leader as King but Achilles is also leader as first warrior. Both claim to be number one and the result is "stasis" which translates as civil strife. It is Athena who intervenes to avoid Achilles killing the King which would be against the Natural Law, the same force which caused Zeus to send a plague to the Mycenean army when the princesses were kidnapped. One of the subplots of both the Odyssey and the Iliad is how the law should deal with conflict. The Iliad takes a simple authoritarian view and the Odyssey a more complex one.

Another theme in the poem is that of pathos. Achilles as an archetypal warrior and impulsive personality directs his rage against only one objective: towards his own city or towards the enemy. The city has an interest in ensuring that he is treated justly by themselves but unjustly by the enemy. His rage turns away from the Myceneans to the Trojans when Patrocus is slain by Hector. His emotional revenge on Hector transcends the limitations of law and war.

Achilles' refuses to allow King Priam to take his son Hector for burial even when Odysseus and Ajax try to reason with him. Priam realises that to reach Achilles through reason will be useless and that he needs to touch him emotionally. He does this by evoking Achilles' own father Peleus and breaking into a tearful pleading. This is effective because it is the language impulsive Achilles can understand.

The Iliad also presents two contrasting heroic values in Achilles and Hector. The latter is a social being and holds to family values in relationships with his mother, his wife and his son. Achilles has no family, only a captive concubine with whom he shares no emotions. He is an individual acting on a personal code and selfish emotion.

Hector is moved by duty. He wishes to remain within the city walls with his family but chooses to fulfil his duty on the battlefield. He escapes from Achilles but Athena makes him face up to his enemy by showing him his obligations. He is a social hero who decides through reason and sense of duty. In fact both reason and duty help him conquer his sense of fear. In contrast Achilles decides not to fight motivated by inner wrath. When he returns he is moved by revenge. He is an individual hero who fights for his own ends spurred on by impulse, not rationality.

Hector is human and he wonders about his capabilities in battle. He wants peace and fears his enemy's wild rage. Achilles is superhuman in the fight and cares little for his own safety only fearing an unheroic death at the hands of the River god. He chooses a short but heroic life over a long and peaceful one.

The contrast between the two characters is that of reason against emotion and social values versus individualism. Hector would be a better friend; Achilles a better warrior. In the circumstances there is a need for both of them.

The final verses of the poem describe the burial of Hector :

"Next day, when rosy-fingered Dawn appeared, the people gathered at glorious Hector’s pyre. Then when all had assembled they worked together, quenching the embers with red wine, wherever the fire had reached. Then Hector’s brothers and his friends collected his ashes, still mourning him, their cheeks wet with tears. They placed the ashes, wrapped in a purple robe, inside a golden urn, and laid the urn in a hollow grave, covering it with large close-set stones. Then over it they piled the barrow, posting sentinels on every side, lest the bronze-greaved Greeks attacked them before the promised time. When they had heaped the mound, they returned to Troy, and gathered in Zeus-beloved Priam’s palace for the glorious funeral feast appointed. And such were the funeral rites of Hector, tamer of horses."

The final line refers to Hector as a "horse tamer". Hector is a foreshadow of Odysseus, an archetype of the family man who tames the natural strength of the horse which helps mankind to farm the land, extract its fruits to survive and frees humanity from a part of hard labour so that they can build civilisation. Achilles, on the othe hand, is a furious destroyer who is consumed rapidly while still young. Achilles evokes suffering, terror and fear and uses his strength to destroy. Hector dometicates strength for his own use using wit and intelligence as Odysseus will do in the sequel, The Odyssey.

Homer (900 B.C.)
The Odyssey
Hesiod (700 B.C.)
The Theogony
Email ThisBlogThis!Share to TwitterShare to FacebookShare to Pinterest