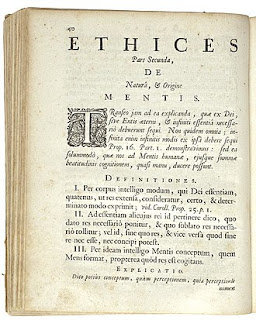 Baruch Spinoza's Jewish family had emigrated from Portugal to Amsterdam to avoid the Inquisition. He was born in that city in 1632.

He was a bright student and was being groomed to become a rabbi. However, in 1656 he was excommunicated from the Sephardic community of Amsterdam. In all probability the reasons for this, although not clear at the time, appear in his later philosophical writings. He denied the immortality of the soul, rejected the idea of a transcendent and providential God and claimed that the Torah was not literally given by God and neither was it binding on Jews.

He composed Treatise on the Emendation of the Intellect, which is an essay on philosophical method. His Short Treatise on God, Man and His Well-Being, is a first effort to expose his metaphysical, epistemological and moral visions. In Principles of Philosophy (1663) he offers a criticism of Descartes. His Theological-Political Treatise (published anonymously in 1670) was his reaction to an attack on the Dutch principles of toleration by political groups and the Dutch reformed Church.

Ethics, Demonstrated in Geometrical Order was composed between 1661 and 1675 and published posthumously in 1677. It is a work about moral living and shows that reason, not passion, religion or material things, is the path to happiness.

He postulated a deterministic pantheism that left no room for free will or spontaneity. We are only free to know that we are determined. (There is a parallel with the predestination of Lutheranism.)

His Ethics demonstrates points in common with stoicism because both philosophies teach how to reach happiness. He disagreed with the stoic idea that reason could dominate emotion. He argued that only one emotion can be dominated by another emotion and that knowledge of passive (not understood) emotions could transform them to active (understandable by reason). (Freud would work with this same hypothesis 200 years later.)

Ethics is divided into five parts:

Part 2 deals with the human mind which Spinoza argues is included in the mind of God. This means that human feelings, actions and thoughts are predetermined by the natural order which has its origin in God's mind. For the author there are 3 types of knowledge : that which originates from sense experience, that which  emanates from reason and that from intuition.

Part 3 analyses human emotion on the understanding that we are part of Nature neither above it nor in control of it. This is evident because we have experiences and do things that are not within our control. He includes a review of such emotions like joy or sadness.

Part 4 Is an explanation of how emotions lead to unhappiness because we are controlled by something we do not comprehend. Happiness depends on developing our knowledge so as to better control our lives.

Part 5 offers a path to happiness. We can gain this by following our self-interest in an intelligent way and making others happy. The optimum happiness is acting according to virtue, which has its own rewards, and knowing and loving God.

God is central to the self-creating universe, according to Spinoza. The divinity is the point of origin which must be singular since there cannot be two origins. He concludes that God is unique and self-defining. If another god form were to exist it would be within the pre-existing Divinity and would survive attached to it.

“By God, I mean a being absolutely infinite, that is to say, a substance consisting of infinite attributes, each of which expresses eternal and infinite essence.”

Following a reasoned discourse Spinoza proves that God is infinite, necessary and is self-caused. God is the only substance so everything else exists in God's attributes which Spinoza calls modes. The author conceives of God as immanent, a universal cause of existence. The infinite modes are governed by God directly. They include the laws of physics, geometry and logic.

Nature is seen by Spinoza as a whole, without cause and substantial. Everything that exists is part of Nature and this is Spinoza's God. All is determined by the order of Nature/God.

Spinoza has a simple answer for the general 17th century problem of mind/body dualism. He denies that humans are a union of two substances as Descartes holds. He sustains that the mind and the body are different modes of the same entity : the person. However that also implies that if only God is substance then humans cannot self-determine which means there is no free will. We are subject to certain laws, the body to physical causality and the mind to logical relations.

Knowledge appears in three stages in Spinoza's thinking. The most primitive stage is knowledge through perception and since it has little information is considered worthless and inauthentic. The next stage comes through science which offers rational and citable information. The highest stage has its origin in scientific intuition and it comes after mastery of of the two other stages. It is then that your intuition can take over as the principal path to discovery.

"I make this chief distinction between religion and superstition, that the latter is founded on ignorance, the former on knowledge; this, I take it, is the reason why Christians are distinguished from the rest of the world, not by faith, nor by charity, nor by the other fruits of the Holy Spirit, but solely by their opinions, inasmuch as they defend their cause, like everyone else, by miracles, that is by ignorance, which is the source of all malice; thus they turn a faith, which may be true, into superstition."

God is the universe and vice-versa. The laws of the universe are based on rationality and are guided by reason. It is these laws themselves that prevent humanity from understanding the extent of the universe. This is part of their design since we must come to accept that it is beyond our capacities to comprehend reality. However in order to transcend these limiting laws humans can believe in life's purpose and a mission to achieve that purpose.

"Nothing in the universe is contingent, but all things are conditioned to exist and operate in a particular manner by the necessity of the divine nature."