The distinction between pre-Socratic and Socratic is based on the interests of their protagonists. The former were interested in cosmology and speculation about the physical world . The Socratics looked for answers to moral and coexistence problems. This vision was inaugurated by the group of Miletus, Samos and Heraclitus who influenced Socrates, Plato and Aristotle.

An original Socratic contribution was the belief that the human being is political by nature. Thus they built their civilization on the 'polis', the city. This new rationalist vision was also the catalyst, in Athens, of a political evolution in civilization: democracy.

For Greek philosophers the essential quality of civilized life was humanism: the human is the measure of all things and fulfilling the potential of the individual was the goal of the civilization. Freedom and destiny are the themes of all their art. They also understood that civilization is fragile and that maintaining an open society is difficult because the irrational constantly threatens to break it down.

Socrates is known to us, not by his own writings but by those of others like Xenophon and Plato, both students of the teacher. They offer us the essence of the questions that their teacher asked and the general orientation of his philosophy.

Xenophon is the author of Memorabilia, which offers the most complete portrait of his teacher. The first part of the work makes an explicit refutation of the charges against Socrates at his trial. It is similar to Plato's dialogues in his Apology. The second part of Memorabilia seems be greatly influenced by a similar work by Plato called the Symposium.

The portrait of Socrates that Plato leaves us, especially in his Apology, is of a scholar who is not interested in natural phenomena, but dedicates his life to a single question: how can you come to kindness? It also describes his teacher's methodology and guidance on ethical issues.

Socrates' political questions fit well with the fundamental question of his time: How to manage coexistence in society? Sparta found the answer in militarization Social; Athens found her in the democratic discussion. Europe is heir to both cultures.

Plato followed his teacher Socrates on the idea that ethical experts did not have the understanding necessary to lead a good human life. Plato argued that these errors were due to their ignorance of the ‘Forms’: Justice, Beauty and Equality. These were not accessible to the senses but only the mind. In his metaphysics he imagined a rational treatment of 'forms' and their interrelations. However, contrary to Socrates, he believes that the good life you need not only knowledge but also getting used to positive emotional reactions.

It is in his work The Republic the character Socrates discusses on the character of justice applied to the polis and the individual. The idea of ​​the philosopher king arises, he who has more knowledge than the others to govern (an oligarchic conception, not a democratic one).

In Book VII appears The Allegory of the Cave. The text is so finely spun that the interpretation forms a unit with the content. Form and background coincide and make up a great metaphor: Plato does not appear as a narrator, but invents two characters who reveal his message in a dialogue. We already have the first metaphor: two people communicating within a fiction theatrical. The meaning is in the hands of the author Plato, out of the picture. Within the play Socrates describes the second metaphor: the allegory of the cave. This even takes cartographic form when the teacher shows the cave drawing to his interlocutor, Glaucon. The metaphor is transformed into topographic art in this third movement. The dialogue format is an integral part of the message of the allegory because it deals with promotion from ignorance to knowledge. It is the education of Glaucon by Socrates through a Socratic dialogue imagined by Plato. In the same way that a prisoner of the cavern has then to make a painful effort to reach the light of truth, Glaucon is brought to the new knowledge by his teacher through a series, not of information, but of rhetorical questions closely linked to the metaphorical cave.

If prisoners in the cavern only see shadows of external events, Glaucon too only glimpsed the shadowy reflection of the new knowledge. And the reader, immersed in the thread of Socratic questions as if in a thriller, is included in the plot. We readers are another level of this enveloping metaphor. The prisoners "... are like us." says the disciple, and this includes us as readers.

It is remarkable that there are constant references to the visuals in the teacher's speech: sun, fire, light, shapes, sight, the map, see ... The prisoners see shadows, Glaucon sees the prisoners seeing shadows and we see Glaucon seeing prisoners seeing shadows. Socrates sees the rest and Plato sees them all. So it is with the development of the whole story, for example, when a chained escapes and creeps into the light or when he returns to recount his discovery. The reader sees both the viewpoint of the disciple and that of the prisoner. Both are learning. The reader too. We are caught and then released into a narrative socratic vision led by Plato.

The highest revelation is that of the Forms. It is the sunlight that clarifies everything. These ideas are the explanation and the liberation from the darkness where we only saw reflex forms: the empirical. The sense is in ideas.

I think we may or may not agree with this Platonic epistemology. However, what draws attention powerfully is how the story of the road from ignorance to knowledge moves through allegorical visions, overlapping metaphors.
Diogenes of Sinope (412 - 323 B.C.) was the most famous cynic. The origin of his tradition is in Socratic thinking. Like Socrates his primary concern was ethics, not as doctrine but as a way of living. For the Cynics virtue was a life in conformity with nature (an idea that the Stoics took up later). This good life was characterized by the use of reason and being self-sufficient and free. However, they thought that conventions could compromise the good life by hindering freedom and imposing a code of conduct opposed to nature and reason. Cynics used to scoff at traditions like the Olympics, the rulers of the temples, fashion or prayers asking for fame and fortune. They believed that only when one was released from the restrictions that hinder an ethical life can one be considered really free.

Diogenes proclaimed that society was an invention created by humans but that it did not correspond well to truth or virtue and was not capable of forming a virtuous human. He believed that humans were trapped in a fictional world that they believed to be real but in fact they lived in a dream. (Plato had dedicated his Allegory of the Cave to this very subject.) Diogenes lived his beliefs inside a barrel in the middle of Athens, like a tramp, turning extreme poverty into a virtue. He said he emulated his hero, Socrates, but some believed that he was mentally ill.

Aristotle, as a disciple of Plato and a biologist, appreciated the importance of logical thought based on science, and was convinced that it was possible to reach an understanding of the universe, the Cosmos, using this method.

He worked as an educator of the future Alexander the Great. When his disciple was crowned king
Aristotle returned to Athens and opened his Lyceum whose members were called the Peripatetics. He soon began to distance himself from Plato's theory of Forms and to elaborate his theoretical arguments and formal analysis. These influenced his works on logic. According to Plato, individual things are imperfect copies of perfect Forms. Aristotle pointed out that all human beings develop from an imperfect state to a more perfect one (basically 'evolution') as he explained in his Nichomachean Ethics. 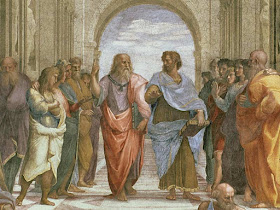 Demosthenes was the prototype of the lawyer. He knew how to speak in public and convince with his arguments. Good rhetoric was a necessity in the Athenian democratic culture where the best speech won the day. Demosthenes had that gift. He used his skills as a speaker in particular against Philip the second of Macedonia, in the Philippics, who seemed determined to conquer all of Greece.

As men of the Axial Age, all of these philosophers were concerned with individual conscience, an ethical life, and questions of social justice. They investigated the principles of existence based on the belief that humanity can understand and decide on its own without reference to the gods.

To try to solve the problems of coexistence in cities, politics and legislation appeared in Asian theocratic societies. The problems were projected onto the authorities and the gods. In Athens the problems were solved in the agora. In tyrannical regimes, such as Sparta, the solutions were military.