- Treatise on the Principles of Human Knowledge by Berkeley 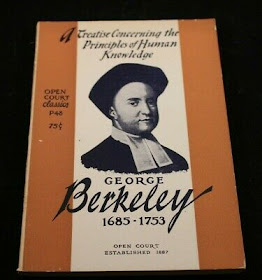 The Northern European philosophers of the 18th century had to face a more and more physical conception of Nature. Empirical science (experience with reasoning) was replacing faith (traditional systems of belief) in the understanding of Nature. Philosophers returned to a basic question: how do we know? It was the era of epistemology.

George Berkeley, an Irish Bishop of the Anglican faith, expounded his epistemological theory on the distinction between matter and human perception in Treatise on the Principles of Human Knowledge (1710). He proposes that reality consists exclusively of minds and their ideas and that individuals can only know sensations and ideas, not objects directly. It is solipsism: we can only know the existence of our mind, but the knowledge of what is outside it is unjustifiable. It is an extreme form of empiricism in which knowledge of the world can only be obtained through direct perception. Is Berkeley simply performing a thought experiment where he pushes empirical ideas to the limit or is his agenda a covert defense of belief in God?

"There are no things regardless of the spirit that perceives them." George Berkeley

As a clergyman he involved God in his theory and his interpretation was a mix of vertical belief in the Divinity together with a flat empirical vision based on sensory experience. He argues that there is an infinite spirit (God) and a multitude of finite (human) spirits and that we are in communication with God through our experience. In this way our experience of the world is analogous to the language of God and Nature is divine grammar. The material world thus appears as an exclusive creation of the Spirit much like Plato's Forms. Berkeley concludes that it is not necessary to postulate the existence of matter because all reality is mental.

Compared to the empiricism of Locke or Hume, that of Berkeley is more radical. He maintained that we can only know the sensible qualities of bodies and things. He differed from Locke and Hume in believing that what we experience are ideas sent from God, not caused by the things themselves. He chose to remove knowledge of himself and God from his empiricist motto "Esse est percipi." (To be is to be perceived). In other words, experience is the source of all knowledge. (In 1953 Karl Popper published an essay describing how 21 of Berkeley's theses reflected concepts from Mach and Einstein's physics.)

The Treatise Concerning the Principles of Human Knowledge (1710) is an exploration of human perception, that is how we know that something exists and what the nature of existence is. Berkeley's thought is grounded in his belief as an empiricist that all knowledge comes from sensory experience

In his Treatise he addresses arguments made by Locke This contemporary empiricist believed that things exist separately from us in a vacuum and we shape them following our perception. Berkeley argues that shape, mass colour and density are human concepts and exist in our perception not externally. Nothing exists materially, everything we perceive is an idea. In fact any existence we attribute to things in the world is due to our perception. Matter does not create our perception; we create matter, which does not exist of itself. For example a blind person cannot perceive colour and a deaf person does not hear music. According to the author the mechanism of experience works like this : we receive sensory information on the smell, texture, size and shape of an object and the mind organises this information in ideas so that we perceive the object as an apple. The idea of the apple only exists when we perceive it which means that if we did not perceive this fruit it would not exist. Nothing exists outside perception in each individual's mind and we all interpret what we perceive in different ways. He argues that if external reality did exist then we would all interpret it in the same way.

Despite suggesting that nothing is real Berkeley believes that the universe has an order. It is God who is responsible for that organisation and for the human capacity to perceive it.

For Berkeley materialism is false and he sets out to prove that there is no reason to believe that material things exist independently of the mind. From his empiricist belief that knowledge can only come from experience he tries to establish that we do not perceive material objects directly and neither can we infer the existence of things from our experience.

“I see this cherry, I feel it, I taste it: and I am sure NOTHING cannot be seen, or felt, or tasted: it is therefore red. Take away the sensations of softness, moisture, redness, tartness, and you take away the cherry, since it is not a being distinct from sensations. A cherry, I say, is nothing but a amalgam of sensible impressions, or ideas perceived by various senses: which ideas are united into one thing (or have one name given them) by the mind, because they are observed to attend each other. Thus, when the palate is affected with such a particular taste, the sight is affected with a red colour, the touch with roundness, softness, &c. Hence, when I see, and feel, and taste, in such sundry certain manners, I am sure the cherry exists, or is real; its reality being in my opinion nothing abstracted from those sensations. But if by the word CHERRY you, mean an unknown nature, distinct from all those sensible qualities, and by its EXISTENCE something distinct from its being perceived; then, indeed, I own, neither you nor I, nor any one else, can be sure it exists.”

For the author our immediate perception experience of colour, taste, odour, temperature, shape and size depends on the mind. He argues that the sensory elements involve pleasure or pain and that these sensations do not exist in the objects but are creations of the mind. A second argument involves the relativity of perception. Colours look different in a different light. Objects appear more or less small depending on the size of the observer: a grain of wheat will appear small to the human eye but large to a mouse. Change proves that the world external to observation is variable according to the perceiver. Berkeley concludes that the existence of things depends not on their real being but on perceptual inference based on experience. Knowledge is perception because we cannot know material objects, we know only our perception of them.

Another reason proving that materialism is false is his argument that it is not conceivable that an object exist outside of the mind. A tree can be conceived as existing independent of any mind but only if we think of it as unconceived. However an unconceived object is contradictory since you cannot conceive something unconceived. We therefore cannot conceive anything as existing independently of all minds. (The criticism of this argument is that it does not distinguish between content and the act of conception because you can have a conception whose content is an unconceived tree.)

Has Berkeley reached the limits of using reasoning on experience and thus shown that reasoning itself has its limitations? This implies that true knowledge can only come from belief not reason, a truly vertical interpretation of reality.

“It is indeed an opinion strangely prevailing amongst men, that houses, mountains, rivers, and in a word all sensible objects have an existence natural or real, distinct from their being perceived by the understanding. But with how great an assurance and acquiescence howsoever this principle may be entertained in the world; yet whoever shall find in his heart to call it in question, may, if I mistake not, perceive it to involve a manifest contradiction. For what are the aforementioned objects but the things we perceive by sense, and what do we perceive besides our own ideas or sensations; and is it not plainly repugnant that any one of these or any combination of them should exist unperceived?'

Berkeley argues that there are only two things in the world: ideas and minds. However, he believes that there also exists a real world, but it is made up of ideas. This has echoes of Plato's Forms and Berkeley's philosophy has been call subjective idealism in this sense. It participates in the abstract upward-looking tradition which differentiated Platonic from Aristotelian thought.

However, there is a pragmatic turn of thought in Berkeley's philosophy. Reality for him is founded on sensory perceptions since it is made up of a collection of sensations. Real things are mind-dependent. They are ideas.

"I am not for changing things into ideas, but rather ideas into things; since those immediate objects of perception, which according to you, are only appearances of things, I take to be the real things themselves."

"Colour, Figure, Motion, Extension and the like, considered only so many Sensations in the Mind, are perfectly known, there being nothing in them which is not perceived. But if they are looked on as notes or Images, referred to Things or Archetypes existing without the Mind, then are we involved all in Scepticism."

Cartesian doubt permeated thinking in contemporary philosophy but Berkeley believes he has found answers that avoid scepticism. There are doubts about whether anything really exists and about whether appearances relate to reality. Neither doubt is relevant to the author's stance. He posits that real things are sensations and these are not in doubt. Once you have the sensation of a tree it would be contradictory to doubt its existence. On the other hand the appearance of the tree is your sensory grasp of it so appearance and reality are conflated in your ideas.

“From my own being, and from the dependency I find in myself and my ideas, I do, by an act of reason, necessarily infer the existence of a God, and of all created things in the mind of God.”

Berkeley's argument against atheism rests on the premise that God controls and maintains the whole system. He affirms that sensible things depend on the mind for their existence, however he is not referring to a human mind but the mind of God. God brings material reality into existence and maintains it by continually conceiving it. He is the primary perceiver. (This is similar to Malebranche's argument that ideas are archetypical eternal truths in the divine comprehension and that humans access them by the grace of God.)

"I do not argue against the existence of any one thing that we can apprehend either by sense or reflexion. That the things I see with my eyes and touch with my hands do exist, really exist, I make not the least question. The only thing whose existence we deny is that which philosophers call Matter or corporeal substance."

The Divinity allows humankind to perceive these ideas in regular patterns which we call 'the laws of Nature'. He says that when we are permitted to have the sensation of fire God adds both temperature and colour. Berkeley argues that sensations are involuntary and concludes that God must be their cause. He adds that since there is no reason to believe that objects exist without the perceiving mind it cannot be the things in themselves which cause the sensation. It must be God. For a real object to exists it must be perceived by God.