- The Nicomachean Ethics by Aristotle 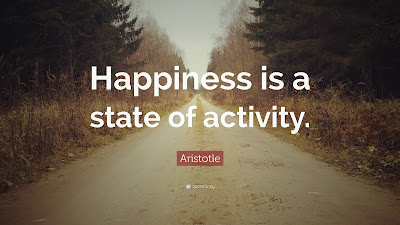 Aristotle, as a biologist appreciated the importance of logical thought based on science and was convinced that it was possible to reach an understanding of the Cosmos, using this method.

He worked as an educator of the future Alexander the Great. When his disciple was crowned king Aristotle returned to Athens and opened his Lyceum whose members were called the Peripatetics. He soon began to distance himself from Plato's theory of Forms and to elaborate his theoretical arguments and formal analysis. These influenced his works on logic. According to Plato, individual things are imperfect copies of perfect Forms. Aristotle pointed out that all human beings develop from an imperfect state to a more perfect one (basically 'evolution').

The Nicomachean Ethics (circa 350 BC) reflects on happiness and the virtuous life.

On the Socratic question of how you should best live your life Aristotle offers advice and also explains the process. He begins by stating that we all know what is right and what is wrong. He argues that these are eternal values and his advice is about how to improve yourself based on that foundation.

The author affirms that happiness for the sake of happiness is our common goal and that our behaviours are tuned to this end. From this he argues that all actions which offer us happiness are examples of the highest good.

The way to happiness is through virtue, but that is difficult to define. He argues that it is about living a life without excesses. A virtuous act depends on the situation and how it can be judged from the viewpoint of right and wrong. An important virtue is education since it enables us to think for ourselves and be aware of how to decide on virtue. Reason will offer us options and help us make good choices. This is the path to happiness.

Aristotle tries to define the difference between right and wrong, good and bad, but they are subjective. However, we know that these differences exist and this is the nearest we will get to understanding them.

The author discusses several moral virtues and the contrary vices. Courage means being confident when facing fear. Temperance is not giving in to physical excesses. Benevolence involves giving away money appropriately. Correct ambition means being honourable and knowing your duty. Patience is needed when faced with anger, though it is occasionally suitable to show anger. Amiability, sincerity and wit are virtuous in living with others. Modesty is not a virtue but an awareness of shame.

Justice, on the other hand, will affect our possibilities of finding happiness since to be just includes living a life without excesses and possessing all the virtues. The fair society is meritocratic and distributes money and prestige to the virtuous.

The moral virtues allow us to behave correctly and it is also necessary to possess the right intellectual virtues to help us reason about behaviour. Scientific knowledge, intuition and wisdom are contemplative forms of reasoning, detached from human affairs. Technical skill and prudence help us to calculate reasons. Prudence is the intellectual virtue that most helps in reasoning about ethics.

Happiness involves loving others which also means loving ourselves. This is not selfishness but it allows us to take care of others which a correctly functioning society must do. Caring for others is justice, and fairness and makes us virtuous. We should be our own friend so as to form deep friendship with others. This is based on affection, not material profit.

Friendship is an example of the highest good. It comes in three types : based on utility, pleasure and character. The first two are superficial friendships and so don't last long. The best friendship is that based on goodness of character since these friends appreciate each other for who they are not for what they might gain. Friendships usually exist between equals though one involving father and son are based on inequality. (Nichomachus was the name of Aristotle's father and his own son.) Politics relies on feelings of social friendship so there is a relationship between friendship and justice. These social friendships form three political constitutions: monarchy, aristocracy and timocracy. Of the three Aristotle prefers monarchy.

Aristotle proposes friendship and education as the answer to living a virtuous life, the highest good, since they involve the conscious pursuit of happiness.

Eudaimonia is the word Aristotle uses for happiness. This is not a subjective state of the moment or a pleasant feeling felt for a short time but the goal of a lifetime, an ultimate value by which you can measure your humanity. A happy life can only be known once it is complete so that children can't be said to be happy since they have not yet lived their lives.

Aristotle was a biologist and used Nature to present his view of human happiness. He classifies Nature in four ways :

- Lifeless objects like metals and stones which are inanimate and soulless.

- Vegetation such as plants which are alive. They have souls since they search for food to grow and are satisfied when they do so.

-  Animals which have a higher level of life since they reproduce and look for pleasure. An animal is happy or sad depending on its health and if its life is pleasant or unpleasant.

- Humans differ from the animal kingdom through their reason. People are capable of modifying their behaviour based on principles and so are responsible for their options. Humans can be blamed for stealing because they are aware that it is wrong but we would not blame an animal for the same thing - it knows no better.

Our quality of life compared with the animals depends on our reason. To use our rationality is to perfect our human natures. We must not disregard our physical urges but channel them through reason.

Aristotle also linked virtue with happiness. Good moral character, "complete virtue", is not a state but a behaviour. The goal is to tend towards attaining all the virtues throughout life which will lead to a perfect existence. However this entails making some difficult choices. One way of deciding is to think that the lesser good is the easier to obtain while the greater good involves sacrifice. So developing a virtuous character needs a strong will. Aristotle is criticising instant gratification but he despairs that the majority will follow this path:

“the mass of mankind are evidently quite slavish in their tastes, preferring a life suitable to beasts”.

This is what the author names akrasia, weakness of will, which occurs when the promise of some future pleasure obfuscates your appreciation of the greater good. He insists, though, that education and motivation can correct this through his image of the clumsy archer who improves by keeping his eye on the target. The Ethics warns that it is necessary to actually do the right thing, not just to think about it which is more Plato's line of thinking passed down to Descartes.

However, Aristotle does not disdain abstraction and states that the really happy life also requires mental contemplation. Given that human nature is rational, reasoned thinking is the highest perfection. By this Aristotle is referring to maintaining childhood wonder about the Cosmos. This is what education is about and it includes both a theoretical and a practical aspect. The practical aspect is acquiring the moral character which he has already outlined. The theoretical aspect is the making of a philosopher which means raising the mind above Nature towards the gods.

This is an important virtue to acquire on the path to happiness. The highest type, arête, is based on wishing the best for your friends without regard for their utility or the pleasure they give. This friendship requires time and care which means that you will not have numerous real friends. Aristotle argues that friendship of this kind is so valuable that it come above justice and honour. To obtain honour assumes flattery or siding with someone more powerful and thus seeking personal gain. Friendship is enjoyed as it is with no need for addons, it is a combination of pleasure and virtue so fulfilling both our emotions and our intellect.

According to Aristotle virtue is the middle way avoiding excesses of any kind in the pursuit of the virtues: courage, justice, temperance, benevolence, and prudence. Courage does not fall into the extremes of bravado or cowardice. Justice avoids receiving or giving too much or too little. Benevolence involves avoiding giving to those who do not deserve and not giving anything to anybody.  He rejects the idea of a bureaucratic approach to the mean as in "I should be cruel to my neighbour now since I was too nice to him before." The golden mean is a midway between two vices, not simply the difference between too little and too much.
The measurement of the mean is also relative to each individual. One person's middle path may be another's excess. A wrestler needs more sustenance than a spectator at the sport so his mean diet will be more varied than that of the normal person. Some are weaker then others and these people will run from battle which involves the excesses of dying or suicide. Aristotle relaxes the moral rules to fit various situations and psychologies.
The concept of the golden mean is in keeping with traditional Greek thinking which understood the Cosmos as the stable result of the opposing forces Chaos and Order. This is the harmony principle proposed by Heraclitus who thought of correct morality as behaving according to the Logos, the balance of opposites. (This influenced later thinkers like Hegel who described the human thought pattern as binary : thesis, antithesis, synthesis.) Plato also defined justice in the soul as an equilibrium of its parts.
Aristotle thought of the healthy body as a sign of a virtuous character following the medical concept of his day of health as a balance between the opposites of hot/cold, dry/moist. Each person needs individual training and a diet to maintain this equilibrium. Similarly a healthy soul requires avoiding excess passion which may end up in violence. Nevertheless, not demonstrating any passion may lead to dullness and antisocial behaviour. He concludes that goodness depends on choosing wisely the balance which suits us as individuals.
- Aristotle and Plato 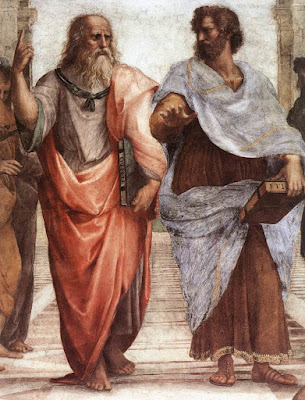 Though Aristotle was a disciple of Plato they disagreed on fundamental views of reality. Aristotle held an empirical outlook on the world and insisted on direct observation and experience using a deductive method. Plato preferred to look beyond sensory input to Idealism, an abstract world of perfection he called Forms, using inductive reasoning. Both believed that thoughts were superior to the senses. However, whereas Plato believed the senses could fool a person, Aristotle stated that the senses were needed in order to correctly determine reality. In his Allegory of the Cave Plato said that the prisoners could only see shadows so their only reality were thoughts. For Aristotle the solution would be to walk out of the cave and discover what was casting the shadows instead of relying on mental experiences.
In Ethics Aristotle is critical of Plato's Form of Good. He asserts that there is no single, universal Form but instead a variety of many virtues. Regarding the Law Plato thought that laws would not be necessary if people were good and properly educated, Aristoteles believed that laws were necessary to guide us to becoming good. Plato offered general Forms; Aristotle offered a specific path to obtaining the same virtues.