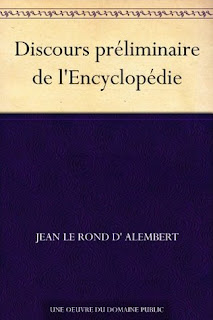 The Discours préliminaire (1751) is an introduction to L'Encyclopédie by d'Alembert (1717-1783). It is a summary of Enlightenment ideology: humans can modify the conditions of life through their own intelligence and analysis. Though written by d'Alembert L'Encyclopédie was a collaboration between the Enlightenment writers Diderot, Rousseau and Bonnot describing their philosophical outlook.

D'Alembert was a talented scientist and mathematician. However his Discours show a tendency to investigate human nature from a historical perspective. This research took two lines: individual thought (l'esprit isolé) and study of the evolution of truth as social progress.

The historical context of L'Encyclopédie was a reaction against the abuses of the spiritual authorities (The Church) which became obvious in 1633 through the condemnation of Galileo Galilei:

"A tribunal that has become powerful in the south of Europe, in the Indies, in the New World, but which faith does not order to believe, nor charity to approve, or rather which religion condemns, although occupied by its ministers, and whose name France could not yet accustom itself to pronouncing without fear, condemned a famous astronomer for having supported the movement of the earth, and declared him a heretic (...). It is thus that the abuse of spiritual authority combined with temporal power forced reason into silence; and the human race was nearly forbidden to think."

The vision of both the Discours and L`Encyclopédie was a move away from Cartesian rationalism to the empiricism of Bacon and Locke. D`Alembert underlines a methodology based on facts and evidence avoiding unsubstantiated speculation leading to error and dogmatism. A core aim of the work was to collect and organise information and also to establish a method of gathering facts and principles for the future. It was an effort of standardisation and categorisation of knowledge. However, he also wished to avoid rigidity to allow the search for new facts and not fall into same dogmatic tradition he was criticising.

There is an introduction to the senses as the principle sources of knowledge. They are at the origin of a systematic link between thinking and reflection, leading to communication. He establishes communication as a necessity for protection and learning from others and for the evolution of human thought.

He describes the types of knowledge we retain, in particular direct and reflexive knowledge. These lead to three thinking styles: memory linked to History; reason corresponding to Philosophy; imagination, related to the Fine Arts.

Under the influence of Descartes simplicity was another of d'Alembert's aims. He asserts that this reduction enables the establishing of relationships through connecting memory, reason and imagination. His ideal universe would be one huge truth and this presupposition that knowledge has an intrinsic unity forms the basis of the Encyclopédie project.

This is an account of human progress in knowledge following memory, imagination and reason. It describes how knowledge progressed during the Enlightenment moving from erudition to belles-lettres to philosophy.

The author details this in a practical fashion through places, people and dates starting from the Renaissance until his time. One leading example is Descartes who is praised for his application of algebra to geometry which is a useful tool for the physical sciences. He also reminds readers that ancient knowledge is basic to founding present expertise. He notes that advancement in philosophy has been hampered by the belief that ancient philosophical ideas are unquestionable and he demonstrates how we can free our minds from the weight of authority by showing how deductive logic offers a philosophical base for the existence of God. He insists that all sciences should be factual and avoid opinions. He adds that analysis is more effective using reason not emotion and the philosopher is essential to advance science impartially. He holds up examples of this in Francis Bacon, Isaac Newton, Descartes, John Locke and others.

This section concerns the contributors and the qualities of the composition of L'Encyclopédie. The author imagines the task to last centuries and previews changes over time. He states that the encyclopedia is structured in three categories: liberal arts, sciences and mechanical arts and that they must remain separate.

Knowledge as an experience is subdivided by D'Alembert into direct and reflective knowledge. The direct mode follows Locke and, as D'Alembert states, knowledge comes to us through the senses:

“all our direct knowledge can be reduced to what we receive through our senses; whence it follows that we owe all our ideas to sensations.”

Reflective knowledge is similar to Locke's reflection or introspection which also relies on our sense experience. However, D'Alembert's dilemma is to demonstrate how both knowledge systems can be changed into universal truths. His rejection of Cartesian innate ideas means he must explain how knowledge can be based only on sensory input and how:

“…all of these things produce an irresistible impulse in us to affirm that the objects we relate to these sensations, and which appear to be their cause, actually exist.”

His answer is through instinct which is more reliable than reason. But the logical problem is not solved since this instinct must be based on an innate idea in our mind. This brings D`Alembert`s argument back into the Cartesian realm of rationalism.

Descartes problem is that it overreaches and rationalism extends into areas which are unverifiable such as God`s placing of innate ideas in our minds. Yet Cartesian scepticism encouraged the Enlightenment thinkers to apply methods of verification. Descartes also advocated simplicity which was a value taken up by the Encyclopedists.

Locke`s empiricism has the opposite problem: limitation. It reduces all thinking to data derived from the senses. Yet Locke contributed to Enlightenment thinking through his attempt to ensure that knowledge was grounded in empirical comprehension in order to lessen the excesses of rational metaphysics.

Memory for D`Alembert forms part of knowledge because it ensures awareness of continued identity through memory of actions.

"Without this memory it would have no identity, since, realising its existence only at the instant of receiving an impression, it would have no life-story. Its, life would be an interrupted series of sensations with nothing to connect them."

In a dialogue with Diderot both agree that memory connects the impressions it receives and forms a storyline which is its life. In this way it acquires self-identity which allows it to deny, affirm, conclude and think.

The Enlightenment did not have ´science´ which is a 19th. century creation, but it did have ´sciences´. In the Encyclopédie the term science refers to knowledge which is secure and reliable in any domain. This meant that there was a science of poetry and painting and that engineering or medicine could be regarded as outside science because they involved craftmanship. 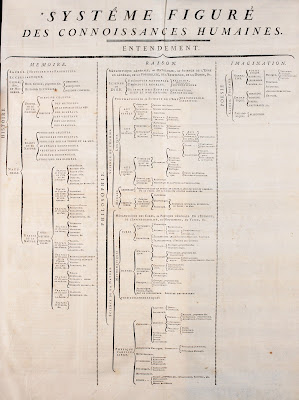 In D’Alembert’s ‘Systéme figuré des connaissances humaines’ which previews the 1751 Encyclopédie many of modern sciences are grouped under Reason. However, this rubric also includes rhetoric, grammar and other arts of communication as well as mathematics. Poetry painting and literature are collected under Imagination as in modern times but the Memory category surprisingly includes planetary science and the literary art of memoir.

"Thus metaphysics and mathematics are, among all the sciences that belong to reason, those in which imagination has the greatest role. I beg pardon of those delicate spirits who are detractors of mathematics for saying this .... The imagination in a mathematician who creates makes no less difference than in a poet who invents.... Of all the great men of antiquity, Archimedes may be the one who most deserves to be placed beside Homer."

D'Alembert affirms that he is building his epistemology starting from the empiricists such as Bacon, Locke and Newton. However he may really be following a much more ancient tradition, that of Pythagoras, Parmenides, Democritus and Archimedes. These Greek thinkers were bypassed by western philosophers in favour of Plato and Aristotle whom the Scholastics continued. However, D'Alembert has the insight to comprehend that the empiricists were themselves following an older tradition which had founded a double mechanics based on rational demonstration and practice:

"Newton finally appeared and was the first to demonstrate what his predecessors had only glimpsed - the art of applying geometry to physics, and to erect, combining experience and calculation, an exact, deep, luminous new science."