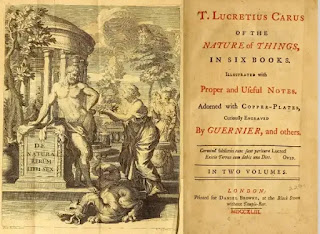 The Roman era of Greek history began with the Corinthian defeat in the Battle of Corinth (146 BC). The Roman Republic had been steadily gaining control of mainland Greece by defeating the Kingdom of Macedon in a series of conflicts known as the Macedonian Wars. The Fourth Macedonian War ended at the Battle of Pydna in 148 BC and defeat of the Macedonian royal pretender Andriscus. The Roman Empire offered the Greeks the conditions for a continuing cultural tradition: military, political, and economic stability.

In post-Aristotelian Greece two dogmatic systems had developed as responses to the disordered environment: stoicism and epicureanism. These continued to flourish under Roman rule.

Lucretius (c. 99 – c. 55 BC) was an Epicurean poet. His De rerum natura, on the nature of the universe, explains epicureanism for readers of Latin. It has survived intact, but may have been redacted. Little is known of his life.

Lucretius believed that even though the gods had created the world, Nature controlled its normal functioning. Death, according to him, was simply the end of consciousness, not the beginning of eternal life. At the time Buddhists, Zoriastrians, Christians, Gnostics and neo-platonic philosophers were asking questions on the same subject.

Other Romans who became Epicureans included Cicero’s friend Atticus, and Cassius, later an assassin of Caesar. Lucretius, however, seems to have drawn his inspiration directly from Epicurus' writings, particularly On Nature, rather than from contemporary thinkers on the subject. He says of Epicurus:

"...my wish is to imitate you … You are our father, the discoverer of reality."

De rerum natura offers a description of Epicurean philosophy including theories of physics, cosmology, theology, and natural phenomena. It promotes the Epicurean lifestyle: avoid pain and cultivate pleasure. The aim of the work is to help the reader understand the natural world and so find the path to epicurean tranquillity.

It is divided into six books subdivided into three pairs structured in an ascending order: books 1&2 deal with the microscopic world of atoms; books 3&4 with human beings; books 5&6 with the whole cosmos. Within each pair of books, the first explains the basic nature of the entity in question and the second examines a range of individual phenomena associated with them.

- Books 1 and 2 set out the basic principles of atoms:

"Nothing exists except atoms and empty space, everything else is opinion."

Book 1 defines atoms and sets out the laws that control them. It explains what is needed to define immortality and is an introduction to future topics.

Books 3 and 4 concern the mind, the spirit and the senses.

Book 3 sketches out the rules controlling the spirit and mind with their relationship to the body. He argues that we should not fear death since it is only the loss of awareness.

Book 4 makes a deeper analysis of the mind and body, describes how the sense work and discloses the role of sex in the Epicurean style of life.

Books 5 and 6 deal with astronomy, the earth and natural phenomena. They offer secular answers to the lives of the gods.

Book 5 explores cosmology which the Epicureans place at the centre of the system. Mortality as part of nature is another lesson.

The poem is also structured by two balanced sections around life and death. The opening is a hymn to Venus, the force which inspires life. The middle of the poem at the end of Book 3 closes with a discourse on the fear of death. The entire poem finishes with the Athenian plague and the theme of death.

This begins with Lucretius' ontology in which being neither originates from nothing nor decays into nothing. Only void and body exist per se while all else is not separable from or accidental properties of these. Time and facts of history depend not on themselves but are contingent to this world.

The basic truths of physics are then laid out. Body is composed of small indivisible pieces he calls primordia, seeds, or matter. (The modern world uses the Greek word atoms.) These particles combine to generate all complex structures of being.

Lucretius then criticises 3 rival physics models proposed by presocratic philosophers: the monism of Heraclitus where fire is the essence; the finite pluralism of Empedocles and his 4 elements; the infinite pluralism of Anaxagoras with his homoeomerous theory.

He ends with a leap to the level of the universe which is described as infinite. This counters Plato's view of the world as unique.

Atoms exist in the void and move at great speed. When they collide they deflect. Being light they tend to move down. At a macro level, though, they appear stable in motion. He accounts for free will in animals by suggesting that there must be an unpredictable 'swerve' in atom motion since we are not automata and not determined by causal chains.

The properties of atoms cover infinite shapes which accounts for variety in the world. However atoms have no sensible properties such as colour or mental power.

Lucretius then speculates on the existence of other worlds since in an infinite universe our world cannot be unique. He recognises that this vision contradicts the religious one of the world as a creation by the gods.

Book 3 deals with the soul and its mortality.

The soul consists of two parts: the anima (spirit/nervous system?) existing throughout the body and the animus (mind/brain?) in the chest. The soul's atoms are a mix of natural atoms (wind, air, fire) plus another very fine one unique to the soul.

Since it is composed of atoms the soul is destined to perish. Its atoms will disperse when the body dies. There is no afterlife and so there can be no fear of death.

Book 4 focuses on the soul’s powers.

He begins with 'simulacra', swift images from solid objects which enter the eyes and cause visualisation. He then notes that optical illusions are of interest since they demonstrate that the senses do not lie, only our interpretations of their information.

Books 5 and 6 explain the whole cosmos and its contents.

The world is a dynamic mix of atoms. Lucretius acknowledges that this is a direct negation of creationism since a benevolent creator would have ensured that his works were eternal, as Plato had said.

The author then explains the casual mixing of atoms that sustains the planet adding a list of possible processes but not choosing one, in epicurean style. The basic link between them is that they are material causes, not divine interventions. He extends this reasoning to speculate on how life first emerged and humans evolved from hunter gatherers to live in cities with language, law and arts. This model is similar to the Darwinian scientific principle of the survival of the fittest in natural selection published seventeen hundred years later. It is unsurprising, though, in the logic of epicurean material physics.

Each advance is introduced by nature and later developed by humans, no need for divine intervention: forest blazes brought fire to humans, language evolved through vocalisations, religion came from humans dreaming of gods to explain natural cosmic phenomena.

At the end of his poem he lists a series of natural events like plagues, earthquakes and storms, excluding divine causation and indeed mocking theological explanations.

Epicurean thought taught that fear of death must be eliminated and pleasure managed rationally. Lucretius includes these values in his poem. At the end of book 3 the message is that death is annihilation and so to fear death is a rational blunder since you won't be here to know you are nonexistent.

"Even Epicurus went, his light of life
Run out, the man in genius who o'er-topped
The human race, extinguishing all others,
As sun, in ether arisen, all the stars.
Wilt thou, then, dally, thou complain to go?
For whom already life's as good as dead."

For Lucretius, Epicurus has made life worth living by delivering us from the torture of fear of death and teaching how to master desires. The Epicurean summary read:

Lucretius' work repeats the first three but enduring evil is absent. It is doubly surprising since the last lines describe the horror of the Athenian plague. However the poem doesn't end with optimism in the face of pain.

Lucretius portrays Epicurus' main achievement as the defeat of 'religio'. This term suits Lucretius since it means bind or shackle (as well as link) which exactly suits his negative vision of religion.

Epicurus did not deny the gods though he reduced them to simulacra the stuff of dreams and imagination. Some interpret this reference as realist meaning the gods do exist; others understand it as idealist, a reduction of the gods to human intuitions. Lucretius appears to embrace the realist perception.

Lucretius follows the Latin poetic tradition of using the names of gods to label conditions of significance to human life such as Venus for love, Bacchus for wine, Neptune for sea or Ceres for corn. He is not against these names or even calling the earth 'mother of the gods', but he advises avoiding the harmful religious beliefs these appelations entail.

The address to Venus in Book 1 where the poet prays to Venus to intervene with Mars and save the Roman republic from strife appears to contradict the poem's central belief that the gods do not meddle in human life. The interpretation may be that Mars is understood as a personification of human anger and competition and so the prayer for pacification is a request to replace Mars with Venus, to make love not war.

The theme of mortality adds a symmetry to the poem through the Books with an odd number. Book 1 insists that the atom is indestructible and Books 3 & 5 assert that the soul and cosmos are transient.

Lucretius believes that our fear of death is deep, unconscious and pervasive.

"Look at the man who keeps leaving his vast mansion because he feels bored at home, and then suddenly decides to come back because he feels no better abroad. He drives full speed to his country retreat… and then rushes back to see the city again. Thus does everyone try to escape from themselves…"

The poet suggests that we can only overcome our consciousness of mortality through reason. This allows us to understand how Nature works.

The first step is to comprehend that we live in an atomic universe. Our minds are just as physical as our bodies. This means that both body and mind will die at the same time. Naturally we will not be aware of death once our body and mind perish.

"Death is nothing to us. When we exist, death is not; and when death exists, we are not."

For Lucretius our love of life and fear of death are the same thought. It is an unclear desire for life that makes us fear death and be unhappy with life. Seneca commented that we are too preoccupied with the future and not attentive enough to the present.

Reason suggests that our unfocused craving for life ruins the only life we actually have. Instead of worrying about the future we should accept our mortality and live simply. Spend your short time well and leave the future to destiny because we won't experience it.

Mortality is natural. A flower does not bloom forever but in fact its beauty is magnified by its emphemerality.

Epicurism in the Roman world was generally rejected in favour of Stoicism, though it certainly survived for 600 years after the death of Epicurus. However the cultural trend went gradually in a contrary direction, towards Neoplatinism and then Christianity. This placed all good life beyond the grave, offering the exact opposite of here and now Epicurism.

Ironically it was the papal secretary Bracciolini who rediscovered the poem in 1417. It then became a reference for the Italian Renaissance.

Modern atomism which emerged in the 17th. century was developed by Pierre Gassendi based on the ideas of Epicurus and Lucretius.

In sum it is clear that Lucretius, following the Epicurean tradition, opted for a horizontal against a vertical vision of reality.