Jeremy Bentham published Introduction to the Principles of Morals and Legislation in 1789 where the three bases of his moral philosophy appear: the principle of greatest happiness; universal selfishness; artificial identification of personal interests with those of others. These will form the basic rational principles for legal, social and moral reform.

The advantages of a utility-based philosophy of morality are several according to Bentham. First, it is a clear reference, allows disinterested and objective public discussion and helps to make decisions when there is conflict. It is also egalitarian because in seeking the happiness of the majority it presupposes that everyone is valued in the same way.

Johann Gottlieb Fichte called his philosophical system 'Wissenschaftslehre' which translates as 'theory of science'. He was influenced by Reinhold, an Austrian who popularized Kant's work. Reinhold's concept, which Fichte retained, was of philosophy as a rigorous science, which required that the principles of philosophy be systematically derived from a foundational principle known with certainty. Following Kant Fitche looked for the fundamental principle, not in the Kantian 'fact' but in a 'fact / action' that is not known empirically but with evident certainty.

In Foundations (1794-95) he explains the content of 'fact / action' in its most general format as 'the self imposing itself absolutely'. He suggests that the 'I' is not static with fixed properties but a self-producing process, free, because it owes its existence to nothing but itself. In other words, Tathandlung is a rational agent who constantly reinterprets himself in light of standard norms and who decides himself how to act. We construct our 'selves' to explain ourselves to ourselves so that our nature is intelligible to us as finite and rational beings. Fichte is considered as a transitional philosopher between Kant and Hegel.

G.W.F. Hegel published his Encyklopädie der philosophischen Wissenschaften im Grundrisse (1817) for use in his courses at Heidelberg. It explains the universe in a systematic way, everything being  based on faith. In religion the truth is veiled but in philosophy it is revealed so that humans can know the infinite and see all things in God. The Hegelian system depicts the universe as a cycle in which the Absolute Spirit knows himself as a spirit by his own thought, by nature. Through the expressions of finite spirits in religion, art, and philosophy they are united with the Absolute Spirit.

The compendium of Hegel's system in the Encyclopedia is presented in three parts: Logic, Nature and Mind. He believed that human thought proceeded dialectically: thesis, antithesis and synthesis that produces another antithesis and thus continues... The process is circular and thought reaches a synthesis that is identical to its starting point except that everything implicit now is explicit. Thus the process of thinking about oneself has Thus the process of thinking about oneself has negativity as one of its constituent moments and the finite, as the self-manifestation of God, is an integral part of infinity.

"Philosophy is the world upside down." Hegel

The system begins with an explanation of the thought of God before the creation of nature and the finite spirit, that is, with the categories of the pure forms of thought, the structures of all physical and intellectual life. If we think about the notion of pure Being we find that it is empty, Nothing. But Nothing is. The notions of pure Being and Nothing are opposite, however, in thought each one passes to the other. The way out of the contradiction is to reject the two notions separately and affirm them together, that is to say, to affirm the notion of becoming because what becomes is, and at the same time is not. The dialectical process advances from complexity to complexity and it culminates with the absolute idea:  the spirit as its own objective.

It is the opposite of the spirit, the sphere of external relations. Nature understands space and time and is thus finite. It is the work of the philosophy f nature to detect that structure and its dialectics. It is only when humanity appears that actions are considered correct according to whether or not they tend to produce happiness. They are wrong if they tend to produce the opposite of happiness. Here, too, the two visions of Kant and Mills interpret the same philosophy differently. While Kantians considered self-evident moral principles 'a priori', Mills argued that the ethically correct and incorrect, truth and falsehood, are matters of observation and experience, that is, 'a posteriori'. As Mills stated in his Autobiography (1873) the model of apriorism allows the individual to ratify his own prejudices as moral principles because there is no external reference to judge them.

Hegel follows the evolution of the human mind through the subconscious, the conscious and the rational will, then through institutions and human history (as the expression of that will), and finally art, religion and philosophy in which humans are recognized as spirits united to God, possessors of absolute truth. Finally, humans have returned to the beginning of the system, but en route they have made explicit what was implicit and have discovered that nothing exists but spirit and spirit is pure activity.

Arthur Schopenhauer published his main work Die Welt als Wille und Vorstellung (The world as will and idea) in 1819, in 4 volumes. It is a reflection on the theory of knowledge, the philosophy of nature, aesthetics and ethics.

The first book begins with Kant. Schopenhauer affirms that the world is a representation: it can only be understood with the help of the constructs of the human intellect that are space, time and causality. But these show the world as appearances, not as the thing-in-itself that Kant considered unknowable.

The second book considers the essences of the concepts presented. As beings we know ourselves externally, as a body or appearance, and internally as a will. The will is the thing-in-itself: unitary, without changes, beyond space and time, without causes or objectives. In the end, however, there is death, the negation of the will's wish to survive.

While the first two books present the will in the affirmative, the last two, speaking of aesthetics and ethics, point to the negation of the will as a possible liberation. It is the arts that will liberate humanity from the will because passion ceases in them, at least for the moment. A genuine liberation, according to Schopenhauer, is the result of breaking the ties of individuality imposed by the ego. For example, those who feel empathy are on the path of self-denial of the will to life that the saints achieved by asceticism.

Schopenhauer's anthropology and sociology do not start with the community, as in Hegel, but focus on individuals and show certain possibilities of living with others.

Charles Darwin, although at first destined to become an Anglican clergyman, was interested in biology from an early age. At Edinburgh University he teamed up with a disciple of Lamarck who became his mentor. He accepted the opportunity of a voyage round the world as a paying traveller in the Beagle which set sail in 1831. It was on the Galapagos Islands that he noticed the differences between mockingbirds on each f the four islands. He also observed a number of other birds that he called a mixture of wrens, finches, and “gross-beaks”. It was only much later at the Zoological Society in London that John Gould was able to say that they were all ground finches, differently adapted to their environment. Gould also announced that the mockingbirds were three species unique to different islands. This led Darwin to re-examine his finch collection and discover that each island had its particular finch, too. This raised the question of how they had all diverged. 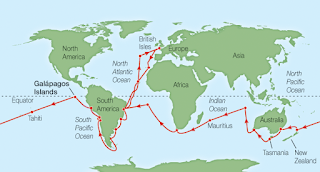 On reading Thomas Malthus’ Essay on the principle of Population (1838) Darwin realised that when the population increased too much there would be competition for food in which the unfit would die. He named his Malthusian process ‘natural selection’ and applied it to Nature. He argued that when a natural population explosion happened there ensued a struggle to survive and through chance variations the most adapted subsisted and passed on the winning trait to the next generation.

Darwin had begun writing his book on the theory of natural selection in 1858 when he received a letter from Russell Wallace working on specimens in Indonesia and who had come to similar conclusions. This overcame Darwin’s hesitancy about publishing and he agreed to publish The Origin of the Species in 1895. This became the cornerstone of the theory of evolution.

Darwin continued his biological investigations publishing other books such as The Various Contrivances by which British and Foreign Orchids are Fertilised by Insects (1862). This demonstrated that the orchid’s beauty was not of divine design for human pleasure, as was the common view, but to attract bees to its nectar for the purpose of cross-pollination. In 1871 his double volume his two-volume The Descent of Man, and Selection in Relation to Sex was a response to critics of the male hummingbird’s colourful plumage. Darwin pointed out that it had a specific function: to attract females as mates.

Though Darwin based his theory on biological observation, evolution became a philosophical explanation for more than natural phenomena. Social darwinism, for example, took advantage of the double meaning of “fit” in English. Darwin used it as meaning ‘adapted’ but the Nazis interpreted it as’ healthy’ (as in ‘fitness’) and used that as an excuse for the extermination of the ‘unfit’.

John Stuart Mill in 1843 published A System of Logic. It was part of his fight against the German 'a priori' school. He argues for radical empiricism in logic and mathematics by suggesting that its basic principles are generalizations from experience rather than known 'a priori'. The problem with this doctrine, according to Mills, is that it supports the belief that we can know universal truths about the world through evidence provided only by the mind, rather than by nature. For him the 'a posteriori' evidence, the empirical verification, was inescapable. This was the inductive vision of Mills against the deductive approach of Kant's followers.

His book Utilitarianism was published in 1863. At the center of his ethical philosophy was the principle of utility: actions are correct according to whether they tend to produce happiness or not. They are wrong if they tend to produce the opposite of happiness. Here, too, the two visions of Kant and Mills interpret the same philosophy differently. While Kantians considered self-evident moral principles 'a priori', Mills argued that the ethically correct and incorrect, truth and falsehood, are matters of observation and experience, that is, 'a posteriori'. As Mills stated in his Autobiography (1873) the model of apriorism allows the individual to ratify his own prejudices as moral principles because there is no external reference to judge them.

Søren Kierkegaard questions the method of doubt in philosophy. He replaces the Cartesian doubt with the attitude of 'wonder' of the ancient Greeks. The author argues, against Descartes, that doubt cannot be the starting point of philosophy because it is only possible after having begun to philosophise. He asks if it is possible to maintain pure Cartesian doubt with the absolute skepticism that it requires.

Kierkegaard also criticizes the epistemology of Hegel, Spinoza Fichte, and Kant. He argues that objective knowledge is a contradiction because it is the subject that knows and there can be no knowledge outside of subjectivity. He argues not against knowledge, which would be solipsism, but against Absolute knowledge.

Kierkegaard's epistemology is very subjectivist because it is based on a double reflection in which reflective knowledge reflects on its belief that something is true.