At the end of the 15th century a new world of civilizations opened up to western explorers when in 1492 the Spanish arrived on the American continent. This feat brought together again the two parts of the world that had been separated by the tectonic shift of the planet that brought the Atlantic and Pacific oceans between Eurasia and the American continent. With the new discoveries, and after the inspiration of the Italian Renaissance, a period of cultural instability opened characterized by eagerness for reform and an interest in the vernacular. Many famous authors such as Erasmus, More and Loyola preferred to continue with the lingua franca of Europe, Latin. The Protestant Reformation with the translation of the Bible into the vernacular and the invention of the printing press in the following century would encourage literacy and the distribution of works in the native language.

Nordic religious humanism was another characteristic of the time and responded to social change and the inability of the established religion to respond to the needs of literate believers who had increasingly more confidence in themselves. They attacked scholastic theology as an unnecessary complication of a simple faith and criticized empty ecclesiastical rites and the selling of indulgences.

The main spokesperson for this message was Erasmus of Rotterdam. He used the philological methods of the Italian humanists for historical criticism especially in studies of the New Testament in the original Greek and of the church fathers. He helped replace the scholastic curriculum with studies based on the classics, similar to the Italians. His balanced criticisms were directed both against the abuses of power of the Popes and against the dogma of predestination of the Protestant reformers. In this way Erasmus became was rejected by both sides.

Thomas More, Prime Minister of Henry VIII, was sentenced to death by the king for not denying his Catholic faith. He was a great friend of Erasmus. He wrote the best-known English work of the Renaissance: Utopia (1516). Written in Latin, it deals with an ideal state that is inspired by Plato's Republic and Aristotle's Politics. It is a satirical work imitating the Greek writer Lucius admired by Erasmus and More. Renaissance humanism is perceived in its application of classical ideas to the politics of the time. Like Leonardo Bruni, More believed that ancient political ideas could create the ideal state. But More was also skeptical and used humanistic idealism to criticize contemporary society.

In the middle of the 15th century one of the most influential religious books appeared, The Imitation of Christ. It was written in Latin, probably by Thomas à Kempis, a Dutch monk. He gives advice on how to live spiritually, stresses the spiritual against the material and encourages strengthening the faith through the Eucharist.

Martin Luther, a German monk, theologian, and scholar of St. Paul's letters, came to the belief that salvation was the result of God's grace through faith, that is, predestination. (Ephesians 2: 8) Good works would not affect individual salvation.

He protested against ecclesiastical corruption that sold indulgences to finance the construction of Saint Peter in Rome and hung his complaints in Wittenberg (1517). He was excommunicated, but, protected by the elector of Saxony, so he spent his time, together with others, translating the Bible into the vernacular. This was a powerful event because it freed German readers from the ecclesiastical power that functioned as the sole interpreter of the Bible. Now everyone could comment on the book.

In Switzerland religious reform began in 1519 with the sermons of Ulrich Zwingli who had the same ideas as Luther. Jean Calvin fled France to Geneva in 1541 in order to continue teaching his doctrine of reform that emphasized the power of God and predestination. A theocratic regime of austere morality was installed. Protestant doctrines spread to reach Scotland (Presbyterianism), France (Huguenots), and Holland (Calvinism) where they were enduring religious and economic forces.

In England religious reforms began with Henry VIII's need for an heir. When the Pope denied a divorce with Catherine of Aragon, in 1534 Henry, an absolute king, declared himself the final authority in religious matters of the church in England. He dissolved the monasteries to confiscate their wealth and power and placed the translated Bible in the hands of the parishes. After a pro-Calvinist movement by his heir and a Catholic reaction under Mary, daughter of Catherine, Elizabeth I took the throne in 1559 and introduced Anglicanism (a middle way between Calvinism and Catholicism) and a common prayer book in the vernacular.

The Council of Trent (held intermittently between 1545 and 1563) was the slow response of the Catholic Counter-Reformation. The resulting Catholic Church was more spiritual and cultured. A new passion for renewal came by the hands of the Jesuits and the mysticism of Teresa de Avila. The Inquisition in Spain and Rome and The Edict of Nantes in France (1585) were organized to impose orthodoxy on Protestant heresy.

Scientific reform was led by Francis Bacon who was writing when the Americas were discovered. Humanity was freeing itself from the ancient vision that everything had been discovered or had been revealed by Aristotle or the Bible. Bacon's goal was to reform research. The proposed method was the methodical observation of facts in the study and interpretion of natural phenomena. He explains the new style of investigation in Instauratio Magna (1620) with a cover (see image) inspired by the motto of Carlos I where a caravel is seen going beyond (Plus Ultra) the mythical pillars of Hercules in the Straits of Gibraltar. The symbolism reminds us that Bacon also wants to overcome the confines of the old world in a new scientific endeavor. It was written in Latin and influenced by the Aristotelian inductive method. Bacon established the scientific method in an empirical and pragmatic philosophy, but not in the vernacular. 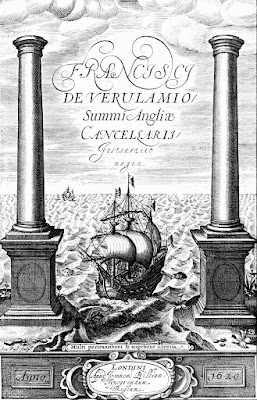 In his philosophical vision Bacon perceived how science and technology would be used in the future to subjugate other peoples and conquer nature itself. From then on, Bacon said, the supreme value would not be measured in moral or religious terms but in utility. The truth would be the utility, and vice versa. Humanity would make its own laws and would no longer depend on God.
In 1514 Nicolaus Copernicus, canon of the Frauenburg Cathedral in Germany, developed his own model of a heliocentric planetary system in his Commentariolus. His second book on the subject, De revolutionibus orbium coelestium (1543) was later banned by the Catholic Church (and criticized by Martin Luther, quoting Joshua 10:13 where it is read that the sun stood still).

In the 2nd century B.C. Ptolemy had invented a planetary model with eccentric motion, a significant departure from the Aristotelian concept of circular planetary motion around the earth. Copernicus proposed a heliocentric solar system as a reconciliation of the two models.

Johannes Kepler was a German astronomer in the 16th century when the concept of scientific community did not exist. Everything was under the control of ecclesiastical, Catholic or Protestant, institutions. His first intention was to become a theologian.

He was introduced to the study of the stars and to the ideas of Copernicus by his professor of mathematics at the University of Tübingen. Kepler understood that they revealed a universe that bore the mark of a divine plan - a revelation. He decided to demonstrate rigorously what Copernicus had guessed at and he did so using philosophical and religious vocabulary. He believed that divine archetypes were visible as geometric shapes in the world and so to reveal the structure of the universe was to read the mind of God. Inspired by Platonic ideas Kepler also believed that the human mind was created to understand the configuration of the universe.

If Kepler had retained the architecture model he probably would not have left behind the vision established by the Greeks. However, he adopted William Gilbert's theory that the earth is a magnet and generalized it to the conception that the universe is a system of magnetic bodies. He was able to continue with empirical demonstrations of the theories with information from Tycho, the royal astronomer, and Galileo, who had built a telescope in 1609.

Eventually Newton built his theories based on Kepler's laws but discarding all reference to his original theological and philosophical framework.

Near the end of The Tempest William Shakespeare makes the character Prospero say that humans are made of dreams. This feeling that our lives are illusions and that fiction and reality are connected might constitute Shakespeare's central philosophy. McGinn writes in his book on philosophy in Shakespeare that the playwright presents life as theater, a fiction, and that the individual must live according to this belief.
The modern English language was less than 100 years old at the end of the 16th century when Shakespeare wrote. There were no dictionaries, and most documents were still written in Latin. He contributed around 1,700 new words to the language and his works strengthened the use of the vernacular in literature.